If you have been reading my posts for a while, you know that I’m not your typical blogger. I don’t really have a rhyme or reason to much of what I write. There is very little cohesiveness in my articles, and my segues are a bit of a stretch, to say the least. I don’t check for spelling, because writing is fun, and proof reading is not. I’m considered the family dictionary (and calculator), yet I almost left segue above as segway.

They are meant to read more like a journal, I suppose. Not that I’m that particularly interesting of a person (it is my life-long hope that my life doesn’t turn into something movie-worthy, because that typically means something absolutely wretched happens!)

This “article” is not any different, so I suppose I’ll just start off with what has happened since my last writing. It begins at the mailbox.

The other day, I got a bit of everything.

After grabbing the bubble mailers and pouring them on my kitchen table to find out which goodies I received for my collection this time, I noticed something horrid.

DRIVERS LICENSE RENEWAL NOTICE … MUST COME IN TO RENEW….NOT ELIGIBLE TO MAIL IN.

It is time to change the happy, plump 23 year old mouschi to a much more refined, hairy, mouschi. We’ll get to that in a bit. First, lets get to see what santa brought me!

Nothing too crazy huge, but a 1992 leaf buy back auto #/33, a platinum blue pacific (very rare), sterling silver coin and a tek variation auto #/25 round off the list nicely. There are more shown below as well, but I’ll show them in my completed errr… “rainbows”. 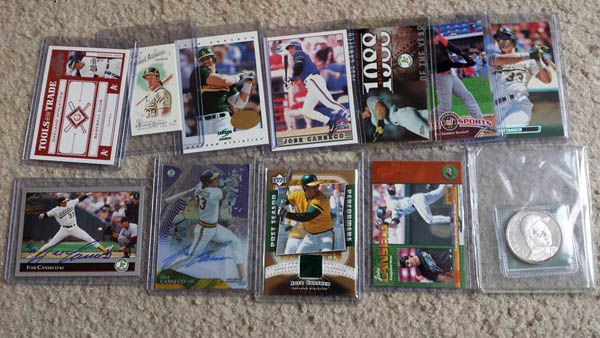 Here is what my current run of Tek Cansecos look like: 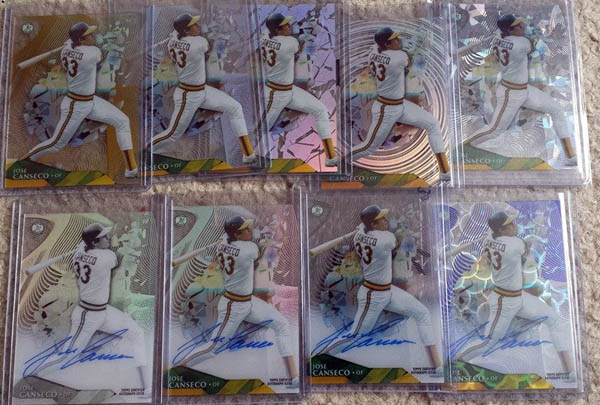 I’ve gotta be honest with you, I feel like they are a bit “bland”. I always have. With as much as people are whooping and hollering over them, I just don’t get it. I mean, they are COOL … but I think they could be coolER.

Here is one thing I did to help that a bit. I took the latest addition: 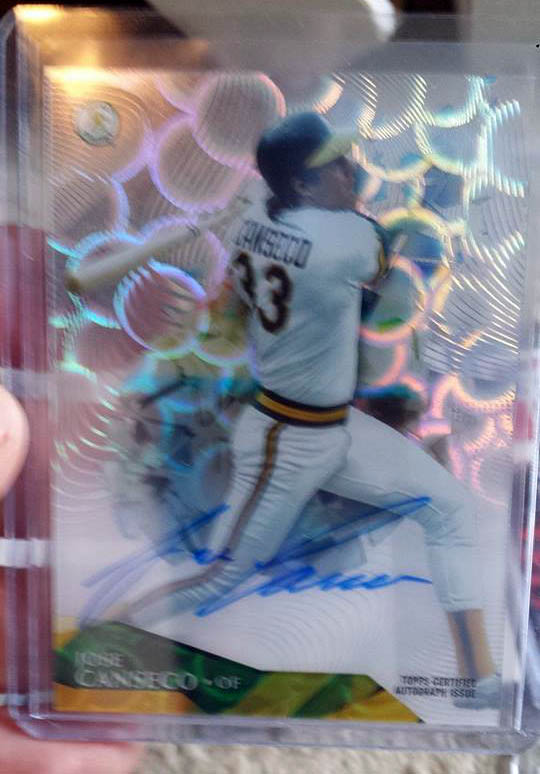 When adding a blue background to it, it looks like it pops a bit more: 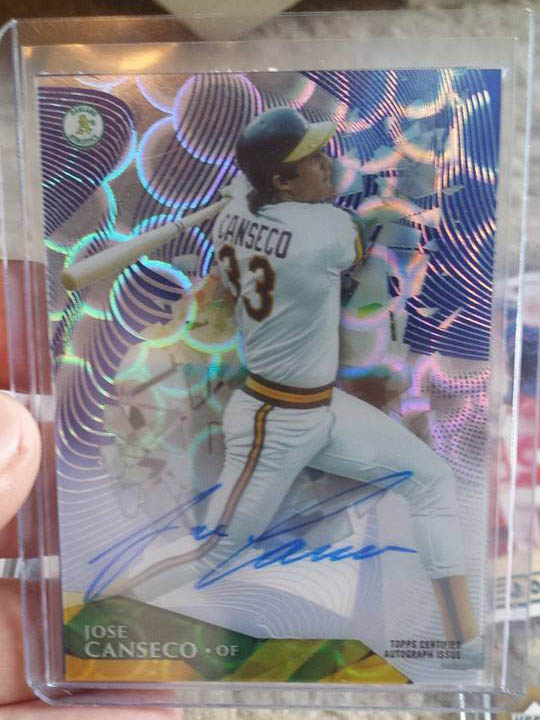 The difference is even more noticeable in person.

I also picked up the sterling silver gallery of champion Cansecos to complete my “metallic rainbow”. After I tracked down the 87, I didn’t think the 89 was going to come my way for a while, but as I purchased the 87, I noticed the seller said he had a lot of these types from 87-91 or similar. I HAD to ask…and he said he had it! We struck a deal on both. 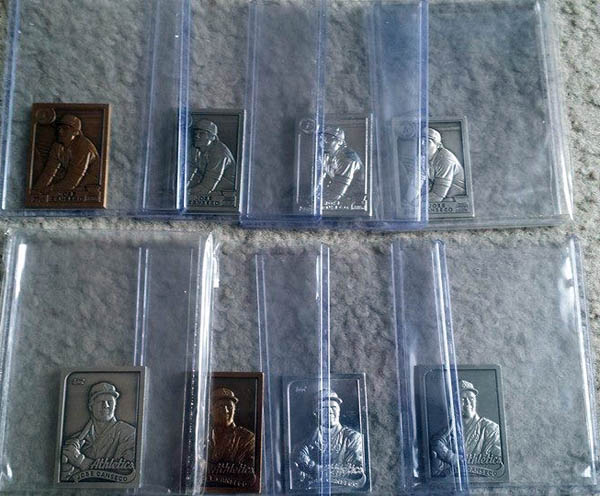 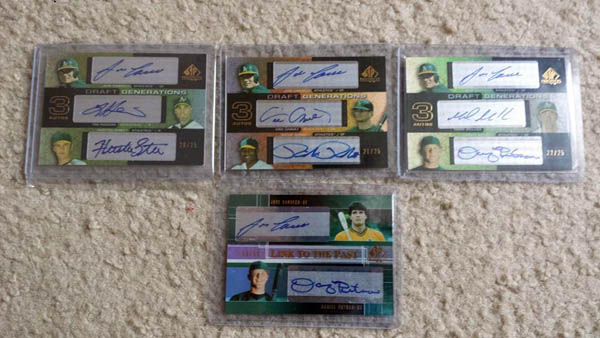 I’ve also been studying up on my variation knowledge, which has still been an absolute blast. The one that gave me FITS was the 1989 Upper Deck MVP blue/black variations. Check the 2 below. See a difference? #659A and 659B respectively. 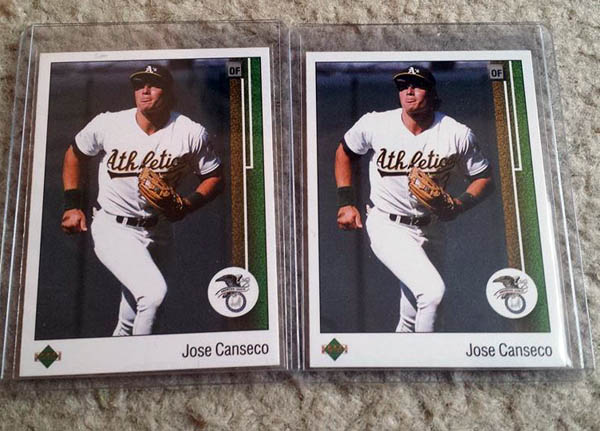 I didn’t either, until I searched endlessly on the web, and looked under a jeweler’s loupe. Check out the below pic … 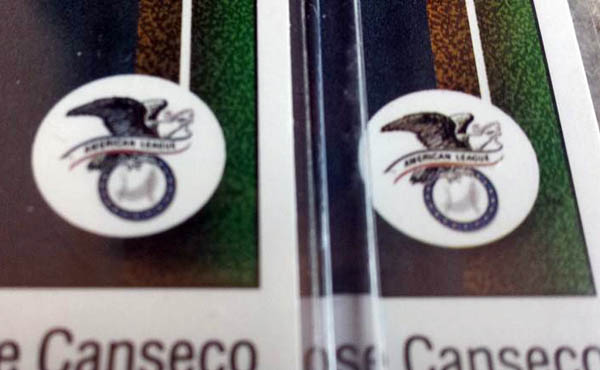 It is all in the wings. The left is the blue version, as the white areas in the wings are not nearly as prominent as its black eagle counterpart. I count that one a victory! I have others, which I will share later, but for now, it is time to go to the drivers license office.

After spending 30 minutes on the phone with these lovely people, it was clear as mud as to what I had to bring, so my philosophy is to bring too much than not enough.

When I got to the newly built government establishment, I’ve gotta admit … it was … eery. Ever see those movies set in the future where everything runs like a top, super high tech, but is very 1984-esque? Everything is recorded and organized. Sterile. Intrusive, big brother style.

I walked in, and was instructed to go to the kiosk, which in turn had me input my cell phone # so their system could text me when it was my turn, and whee to go. After doing so, I was directed to the waiting area to fill out a form that requested what seemed to be much too much information for a simple renewal.

On the screen, you could see the last four digits of your cell phone number, what the approximate wait time was, and what station you were to go to. This was also announced over the speakers by what sounded like a … how can I put this … futuristic sexy computer robot woman’s voice. I’ll call her Rhonda.

I had not particularly been looking forward to going to this, so I felt like I had to make it worth my while. When Rhonda told me it was time to go to the station, I was seated in front of a woman who I don’t think even looked at me. She may not have even had the ability to smile (or perhaps the gubment has told her she cannot show emotion…HMMMM??!?!?)

She asked me to stand up and look at a blue dot for the picture. Now was the time to make this worth it. I made a subtle “off” look on my face. I didn’t want her to scold me for doing so, but I wanted to have a little fun with this, and see if she would do anything.

The picture was taken, and I had wondered if I did elaborate enough for it to show up in the pictures like I had practiced in the mirror the night before. When the flash went off, I looked at her, and she squinted hard into her computer screen as if to say “wow, that was awful, dude”. Though, all she verbalized was “Let’s try again.”

Now was my time to be a little less subtle. Lo and behold … my Drivers License Pic for the next 6 years…. 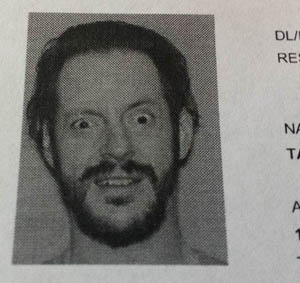 It came out just how I had practiced … crazy eyes, with brow slanted diagonally, upper teeth showing due to upper lip being pulled back and cheeks filled out.

That alone was worth the price of admission.

Back at home, there was much work to be done … in the way of … you guessed it – CUSTOMS!

I was asked by someone a while ago to do a booklet of their son. A booklet card. Here is what I came up with – the left side has a slight fade so his son can sign in the middle if he wants, and the right side is a jumbo piece of his jersey . 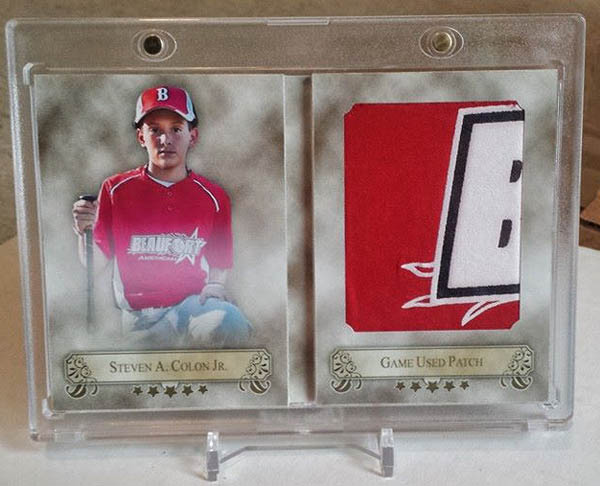 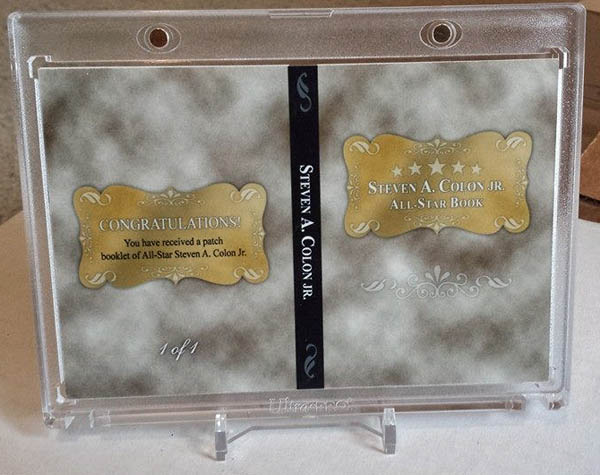 Perhaps the coolest (and most time intensive) project I have been a part of was the next one. A close friend of Jose’s traded me an autographed card and will have the following below signed for me to send back. It is a 4×6 holographic press pass – in person, they came out beautifully! 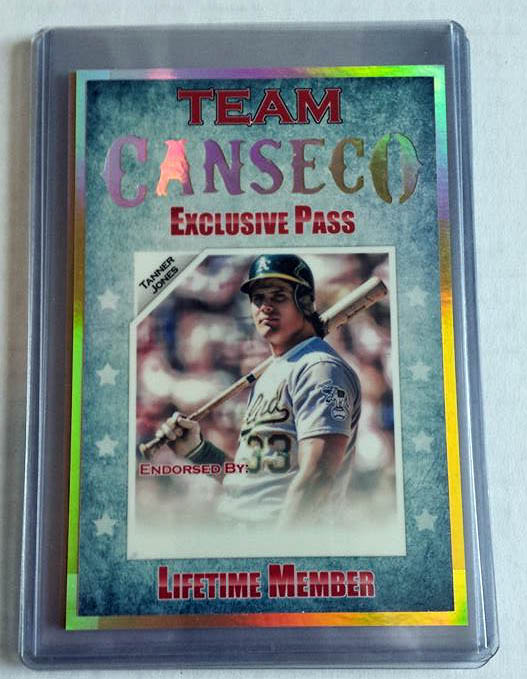 Only 4 of these puppies exist, mine, Jose’s, one for his close friend and one for his manager. They are meant to be used at signings and such.

I have not written much about any pickups for reselling lately. If you followed my flip quest last year, you know I hit it really hard, and did pretty well. I haven’t picked up too much stuff recently, but it hasn’t really been for a lack of trying. Unfortunately, there are too many people out there who still believe their junk wax is gold. Here is an example…

I found someone online with 10,000 uncirculated baseball cards that has he says “could be worth tens of thousands” for only $1,500.

He had me at uncirculated.

I emailed him, inquiring about the cards, and he wrote back with his phone number, instructing me to text him. I ended up doing so, and he simply said “please refer to my ad, as it has all the information you need in it.”

I reminded him that he emailed me asking me to text him for more information. With that said, the floodgates of a wealth of information was unleashed in his single response: 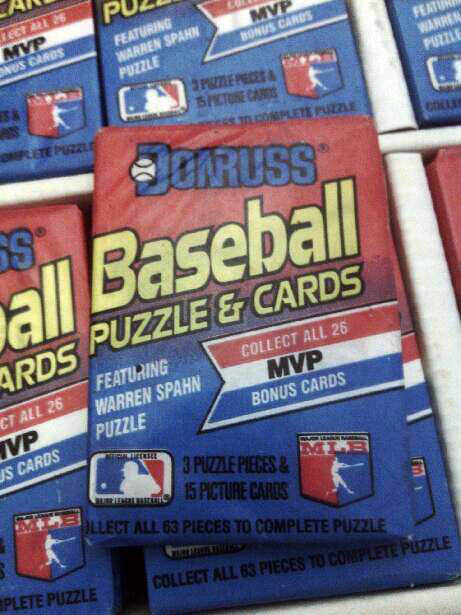 Yes, friends. That is it. That is the only response I got. A single, solitary picture of a few packs of 1989 Donruss. Don’t get me wrong … these packs are so well loved by me in my childhood, that I would probably had considered renaming my dog 1989 Donruss, had my parents let me. For $1,500 however, I think I will pass.

With as many negative, bone-head reactions I get from people, it still seems as though there are so many good people out there. Neil is one of them. He runs www.buyselltradebaseballcardsandmemorabilia.com – I met him through ebay asking him if he wouldn’t mind selling one of his packets of CMC promo cards. He was selling 100 of them for $100.
This is one of the variations I had just uncovered – many are familiar with the little Jose Canseco collectors baseball card kit they put out in the late 80’s. It came in a little green binder, with a square record and several 4 pocket pages to put in a few dozen Canseco cards that came with the kit.

I have had this kit a few times over, but I had never seen this before: 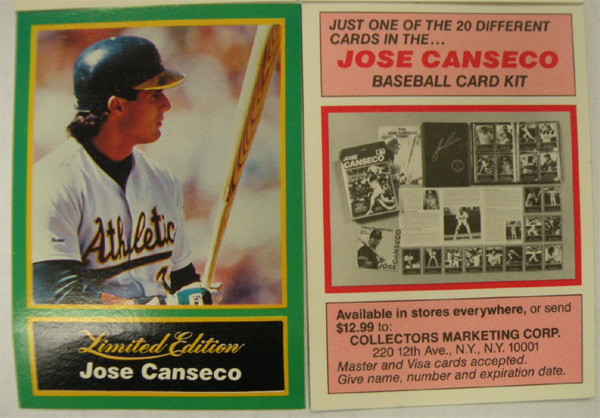 It is the version with the advertisement on the back! Neil doesn’t know me at all, but he said he would send me one for free! I probably get just as much of a kick out of these 80’s and 90’s variations I’ve never seen before as I do the new and shiny autographs.

Thanks Neil for the new card! It will be well loved.