The Tri-Star Show & the Case of the Grumpy Dealer

The Tri-Star show is something that I look forward to like Christmas.  I always am able to make lots of deals, have a TON of fun, and come home with a haul of cardboard to go through & enjoy.

That didn’t happen this time.

Friday was fairly dead for me, and I ended up spending about $20 or so on a few Canseco cards for the collection, and a few cards to resell.  I ended up picking a Mike Lowell printing plate, a Bobby Doerr bat card and a Tony Perez bat card for 50 cents each . Those were great deals, but worth the price of admission?  No, not really.

The coolest thing of the evening is I got to meet and talk with John Kinsella for quite a while – John was an actor in the Field of Dreams.  It was very cool!  I got to try on his dad’s baseball glove from the 1920’s.  We spoke about how it was to work with Kevin Costner, James Earl Jones and more. 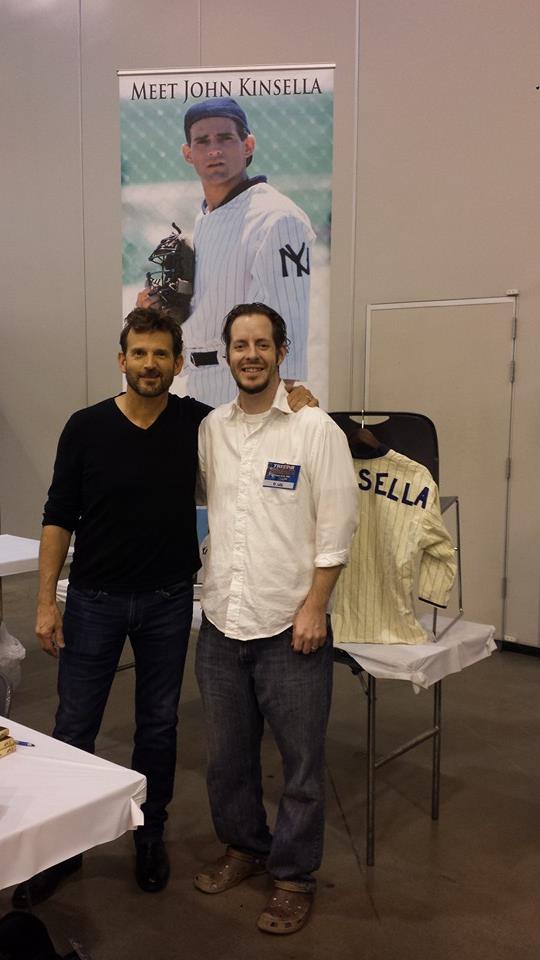 A funny/potentially embarrassing thing that happened was a guy selling a nice rare 90’s insert Jeter card.  It was a PMG from the 90’s.  As I had purchased a bunch of Canseco stuff, I knew that the PMG’s were rare and desirable, so I thought I’d branch out a bit.  It had the Beckett RCR holder and said it was $70.  It had some chipping on the side, but I thought to myself  “self:  I wonder if he would take $50 for it.  I know nothing about the value of these, but I think that would be a great buy!”
I requested to see it, so he got it out of the case and showed it to me.  Upon closer inspection, I saw the grading was 7.0.  Did I mix up things in my head about his asking price?  Did he not quote me $70 and I just saw 70 on the holder and assumed it was $70?  Hmmmm….I better not offer $50.  I better go ahead and ask what the lowest is he’d go.

WHOAAAAA.  Glad I didn’t offer!  If you know about 90’s inserts, you were probably smacking your forehead when I first said I was about to offer $50.  Welp…now I know.  PMG’s ARE valuable … much moreso than I knew.

Saturday, I opted to spend the day with my wife since it was Valentines day, so no cardboardy goodness there.  We did hit a few garage sales and actually picked up some things that probably will yield more of a profit than cards would have, had I gone to the show.

Sunday, we went to church and my wife said she would go with me and my son, so we just left church and went to the show.

Nothing too eventful happened – I got some one touch holders for some of my custom work, and an autographed card for another project I’m doing.  My wife and son were getting restless and I was feeling guilty about dragging them along (imagine being 12 years old, no interest in sports and NO IPOD!!!)

I took him to the corner dealer who I knew had a Darth Vader.  My son was asking about Star Wars stuff so I wanted to show him.  As he and my wife were looking at that, I went to another table.  When I was done, I went back to the dealer with the Darth Vader, and saw my son was digging in some of his pokemon cards.  He pulled a star wars figure and a pokemon card that the dealer quoted $2 for the card, and $3 for the figure.

While I was there, I asked the dealer what he would take for his box of basketball cards cards.  He said $200, and I said I’d think about it.  After a while, I decided not to counter, because that was just way more than I knew I could even sell them for myself, so I didn’t want to offend him by offering $60-80.

As for the pokemon card and star wars character, I asked my son what he thought and he was undecided, so I asked him if he wanted to think about it over lunch.  He said sure, so I told the dealer that is what we would do.  He didn’t really respond, so I assumed he didn’t hear me.  No biggie.

A little background – my son has a hard time talking to strangers, so this is a bit of a big step for him to ask something like this.

We finished our food and went to his table.  My son went up to him, and as timidly as he does normally, he said to the dealer …

“Ummm, I was wondering if you would take $1 for the pokemon card.”

The dealer looked him straight in the eye and gave him a very sharp “NO” answer, then walked away.  I was a bit shocked, but as the dealer walked away, he said “I’m tired of you all bothering me.”

I bit taken aback, I asked him to repeat what he just said.  He turned to me and said “I said, I’m tired of you all bothering me.”  Then walked off.

I admit, I was not happy with this grown man who decided to talk to my son like this.  We walked off in a bit of disbelief,  I told my wife I had to go back and say something.  I was part rage, part wanting to smooth things out … perhaps he misunderstood, was just having a bad day, etc.

So I went over there and we talked for about 10 minutes.

– He was tired of me asking him pricing in bulk, him quoting me a price and me never pulling the trigger.  (I have asked for pricing 2 other times in the past)  I told him his pricing was too high for me, and I didn’t want to insult him with a counter, but he didn’t take it.

– He was very upset apparently that I didn’t buy his basketball box.  He even went as far to try and take me to another dealer to back him up saying the cards were worth it.  I tried to tell him once again that it was simply that I would be buying to re-sell and I wasn’t confident I could sell for a profit at that price.

– He didn’t like that my son offered $1 for something he said $5 for (I corrected him and said he was asking $1 for the $2 card, but he didn’t back down anyway).

– My wife and son were in his space and probably cost him $45 due to lost sales because they were in the way looking at things he had for sale.

– He inferred that I was raising my son poorly by having him negotiate.  (Again, this is after I corrected him saying he was trying to get the card for $1 instead of $2).

In the midst of me going over to him to clear the air (in a spirit of peace), he still decided for some reason it was a good idea to stick to his guns and blast me.  I’m very disappointed with how he handled my son, and the situation in general.  I wrapped up the conversation with him with a hand shake and assured him we won’t be stopping bye to bother him again in future card shows that he is at, I walked away…still in disbelief.

That wraps up this year’s winter edition of Tri-Star.  It was the my least favorite one I’ve gone to, but I do hope if you went, you had a great time, and scored some great deals!  If you ever run into a grumpy dealer, don’t let him get you down – just spend your money elsewhere!