A few weeks back, my wife and I were watching some television, and we heard a knock on the door.  If you want to scare my wife, that is the way to do it.  Her mind quickly gravitates to home invasions … especially since we have a NO SOLICITING sign on the front door (too many issues w/Kirby sales people).

She told … errrr … asked me to look out the blinds instead of open the door, to which I obliged.  There stood a man in the dark, who was asking for me by name – first and last.  He was trying to … you guessed it … sell me something.  I loathe when these unfortunate door to door people cannot read.

It prompted me to make an addendum to our No Soliciting sign: 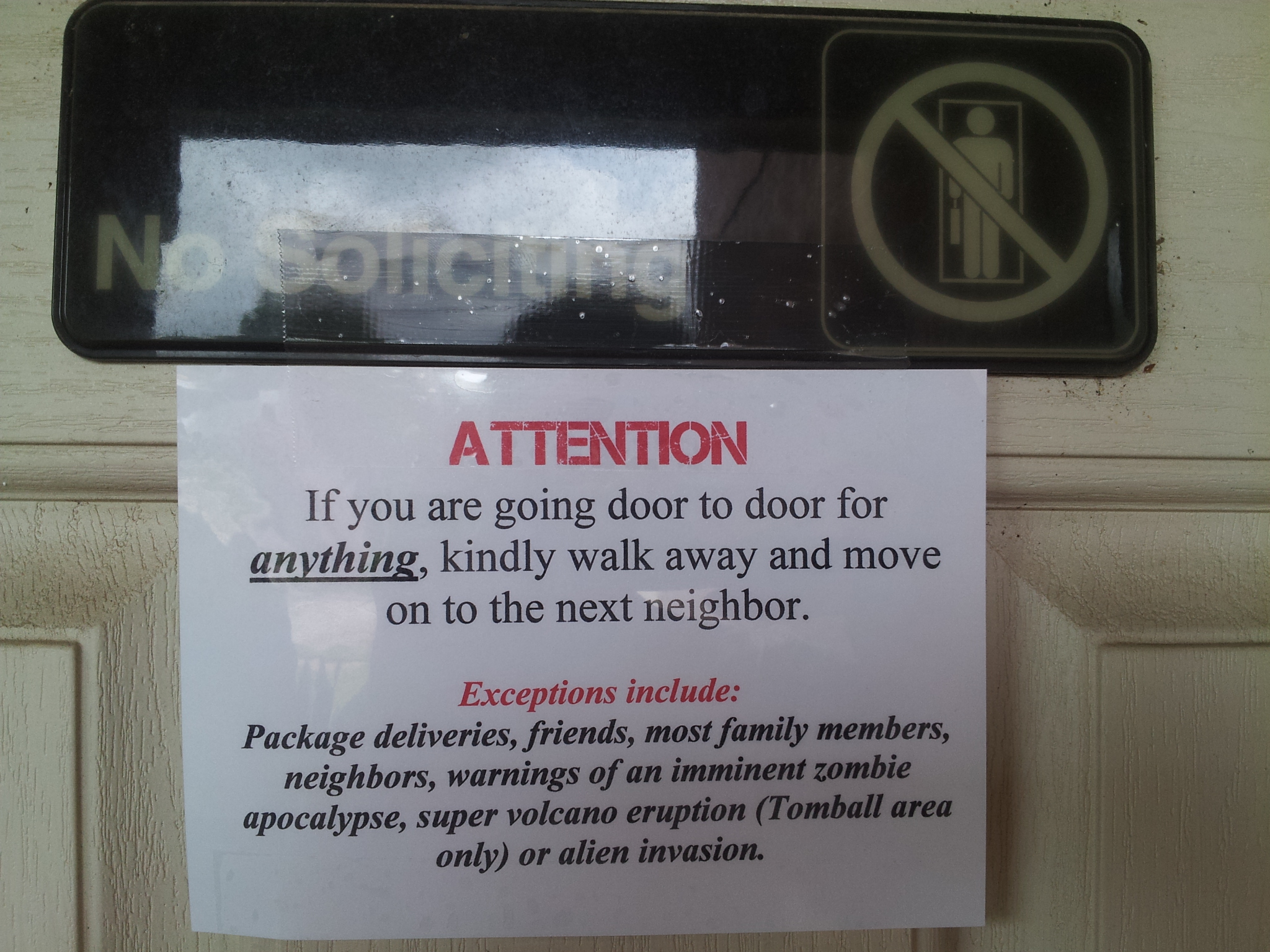 This was a big hit with my son.  I hope that the door to door folks will get the message loud and clear.  Hopefully, the chuckle they can partake in will make them forget about their desire to slash our tires on the way out.

Obviously, that isn’t the only thing I created this past week.  This is, after all, me.  I write about baseball and baseball cards.

I’ve been wanting to do something a little different for my personal collection of Jose Canseco.  Something that hasn’t been done before, to my knowledge.  So what I did was, I posted a message on several online forums asking for some beat up 1986 Jose Canseco rookie cards.  Don’t get me wrong, I already had most of these cards, but there is just something about including contributions from other fellow collectors that helps me to feel like my hobby is not just “me” … it is also others.  It is also great to see the generosity of people come out and send things along.  I am very much so appreciative of it whenever I receive things either for my Jose Canseco collection, or as material to make customs.

Before I get into the meat of the main card that this article is about, I thought I would show off a new addition to my custom collection.  It is based off of 2007 Exquisite Football, I believe.  I had this idea because Billy (a member on the forums – I cannot recall is screen name because we converse via email) had me do a few customs based off the Exquisite design, which he had the artwork for already.  The cards turned out fantastically, so I just had to tweak the design, add my touch to it and try for a Jose card for my personal collection, using some Canseco material I got from AJ. 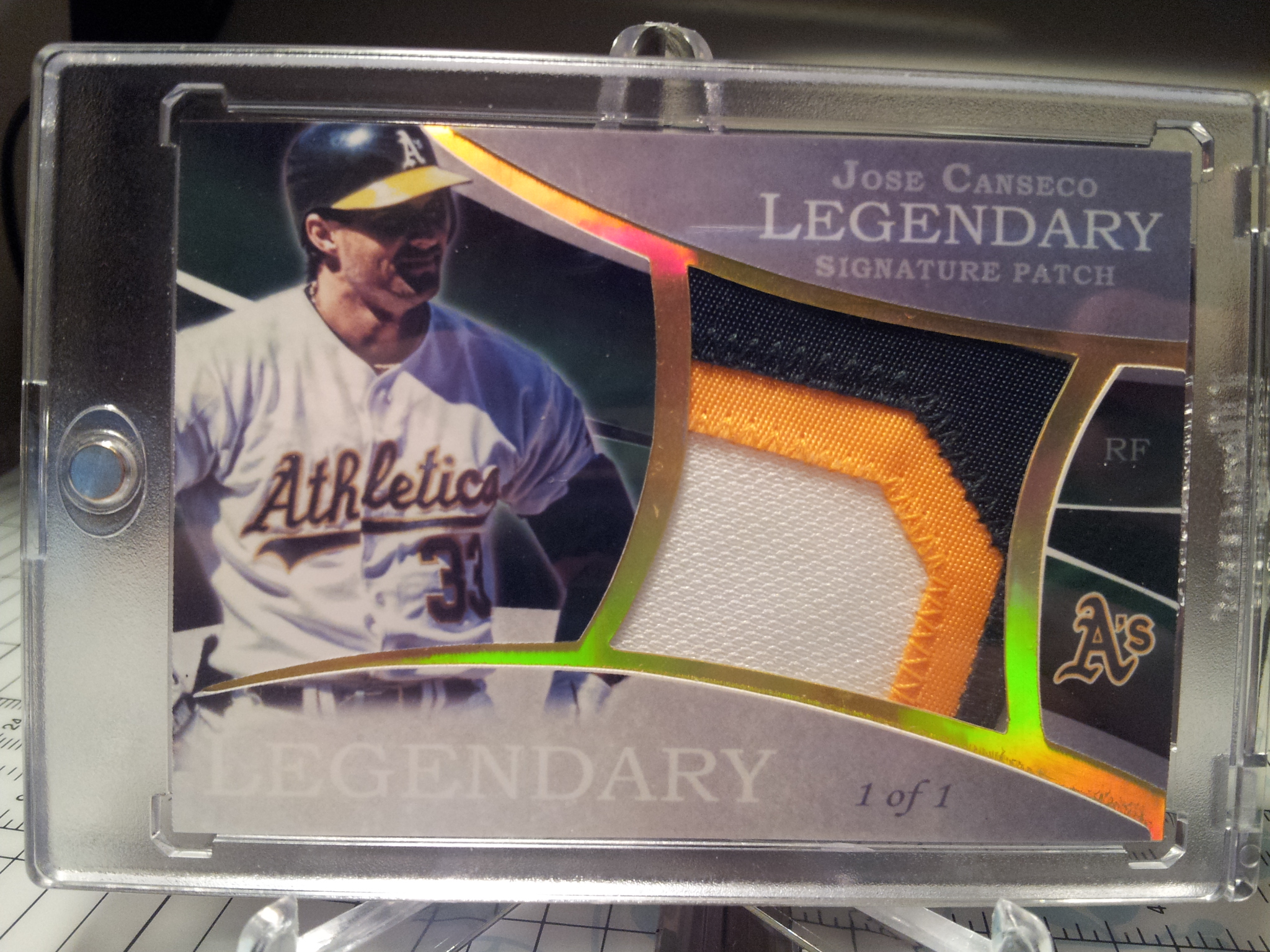 I hope to have Jose sign where it says “Legendary” in the bottom left.

Here is the back – what fun is making a custom if you can’t goof off a little with the text? 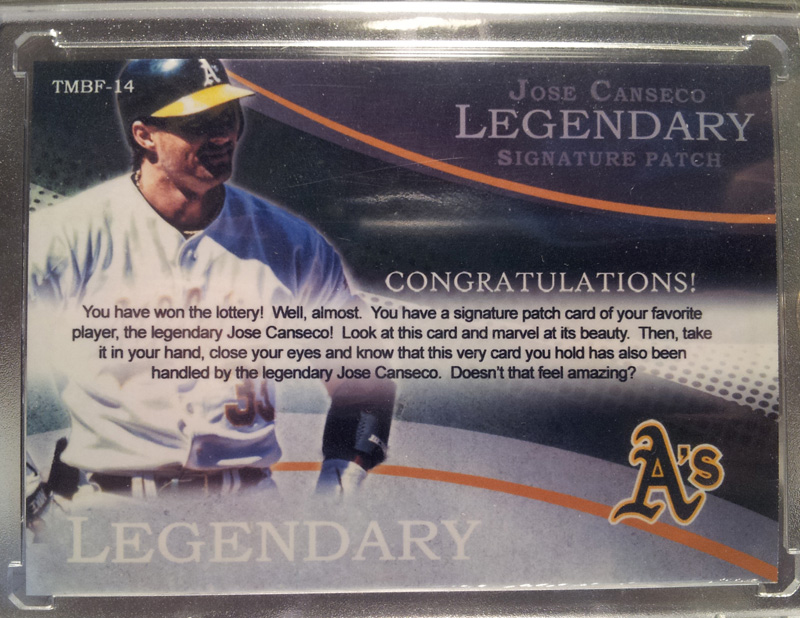 The only way I could love it more is when the autograph is obtained!  Thanks for allowing me to use the artwork, Billy!  I have a few other different designs that I have done as well, which I am waiting for Jose to sign.  I have been in contact with his manager for some more of my “creative” projects.  We had some good back and forth, but unfortunately, the communication has stopped.  I hope he has just been busy, and will reach out to me again.

A while back, I had an idea about incorporating existing rookie cards into a custom.  The major card companies have used jerseys, bats, balls, bases, tickets and more … while I don’t have access to a whole lot of that sort of stuff, I thought … what about pieces of cards?  Heck, why not ask the online baseball card community for help?  Well, you all came through in a BIG way.

I posted the message, and over the course of a few weeks, I was able to get them in, as well as a bunch of other Cansecos as well – my collection and I thank you! This picture is one I sent to a friend via text after receiving my first 2014 Canseco card that he gave me as a gift. Yeah, I get a little too giddy over stuff like this. 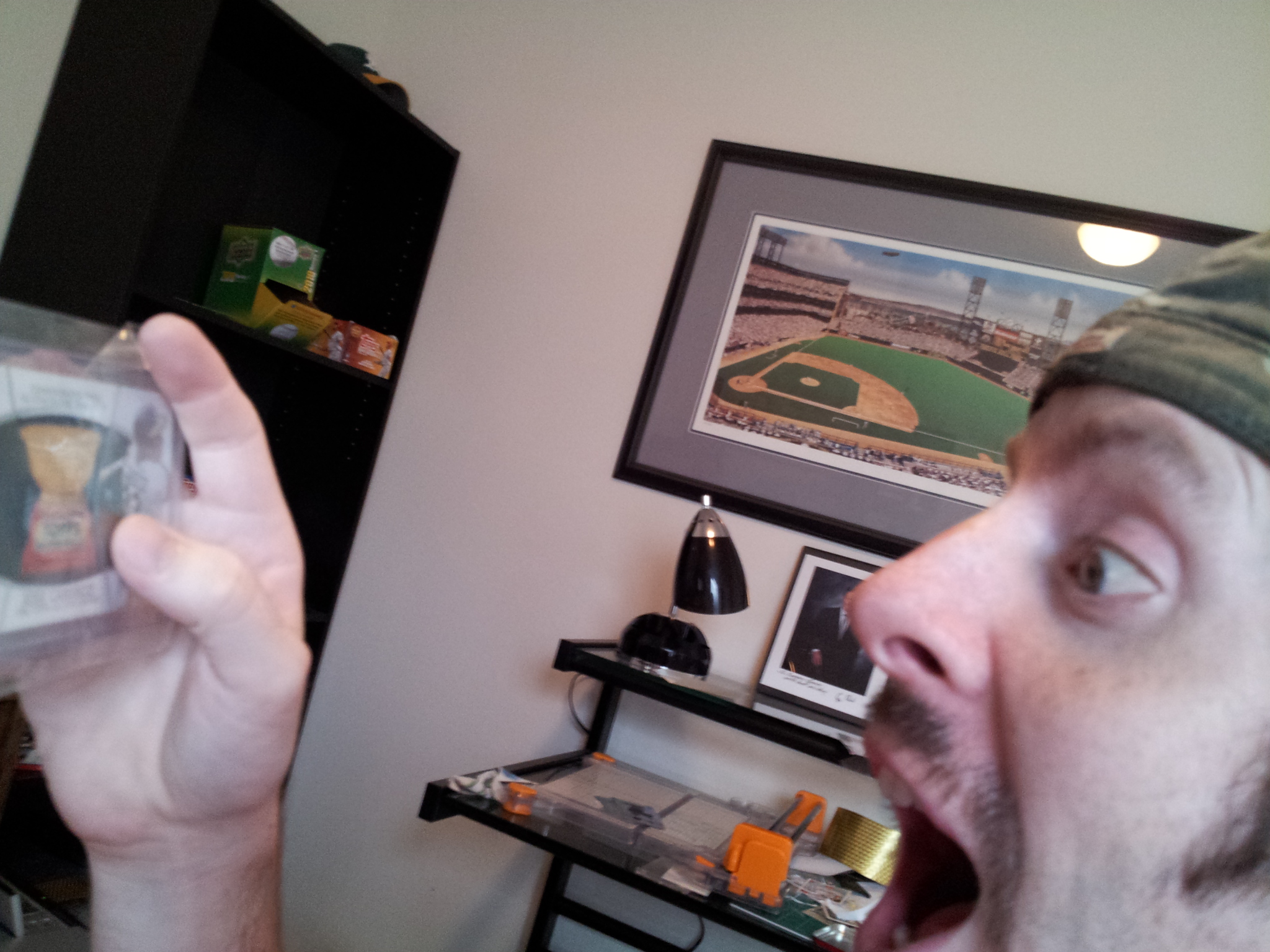 As for the card I tried creating using existing cards … like I said, I have been thinking about it for a while.  Here is what I mocked up before even asking people for the cards.  The card pieces below are just replica pieces I produced to see how it would look.

I think I liked the concept more than the design, initially, so I kept working it.  Firstly … why have 5?  Why not all 6 of his rookies from the major companies? 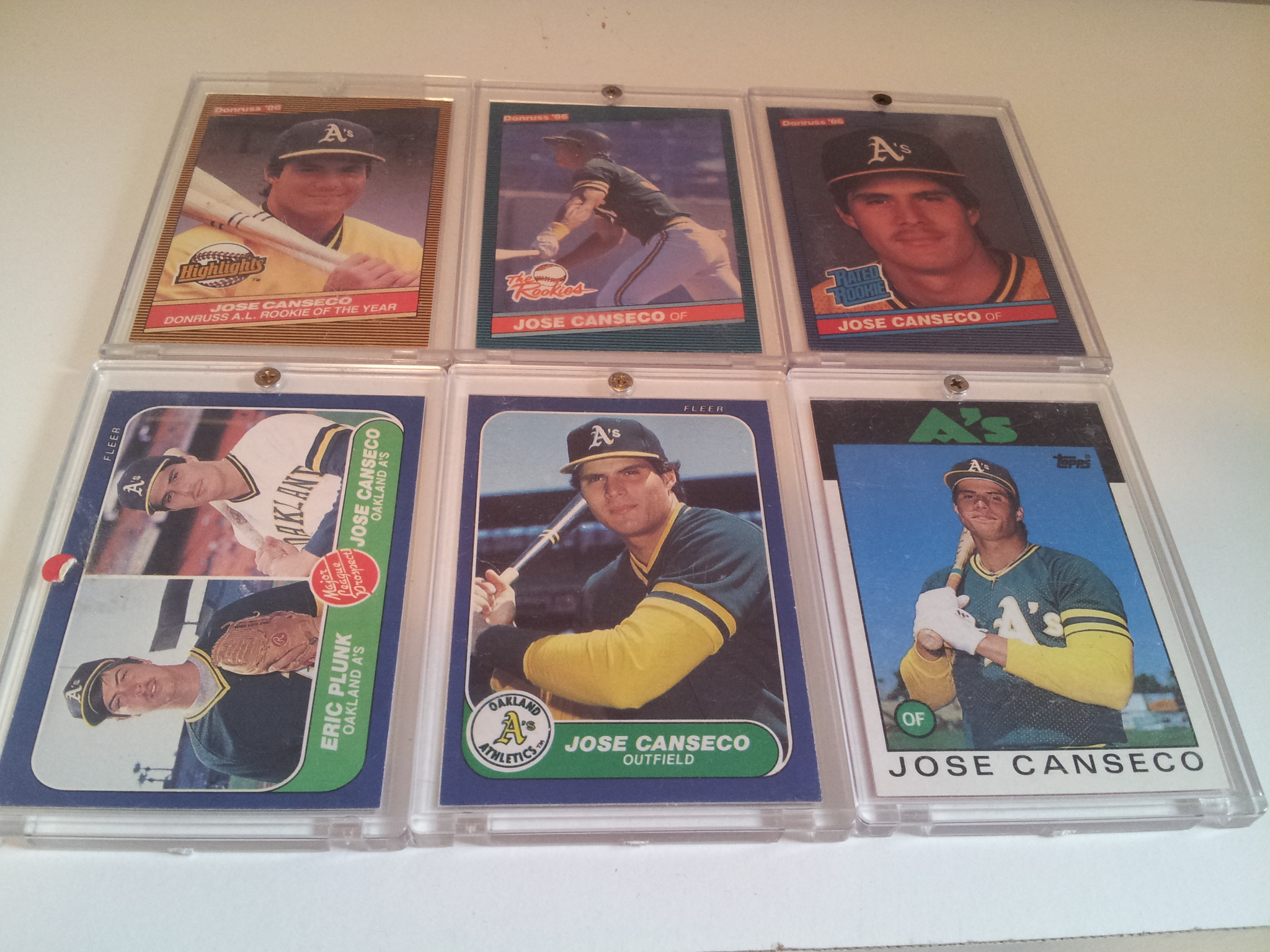 Each and every one of these were given to me.  I mentioned this before, but I also got a BGS 9.5 ’86 Topps Traded Canseco from an online member here named Parker.  I didn’t have the heart to hack that one up.

AHHHHHHHHHHHH!!!!  This was somewhat traumatizing for me, but I knew it had to be done for the greater good.

As I kept going, I had more ideas for this card.

Why have this just as a card?  Why not a <gulp> BOOKLET??

After spending countless hours staring at my screen and obsessing over colors, textures, blending, etc. I had some ideas worthy of producing, so I went to work on it some more … 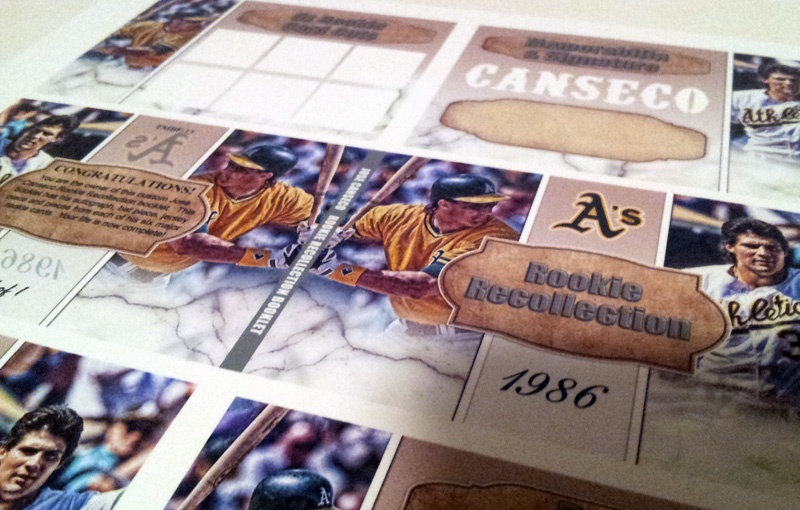 Cutting these was crazy nerve-wracking, and getting the pieces to FIT was even more so.  It was not fun at all, and everything took so long. 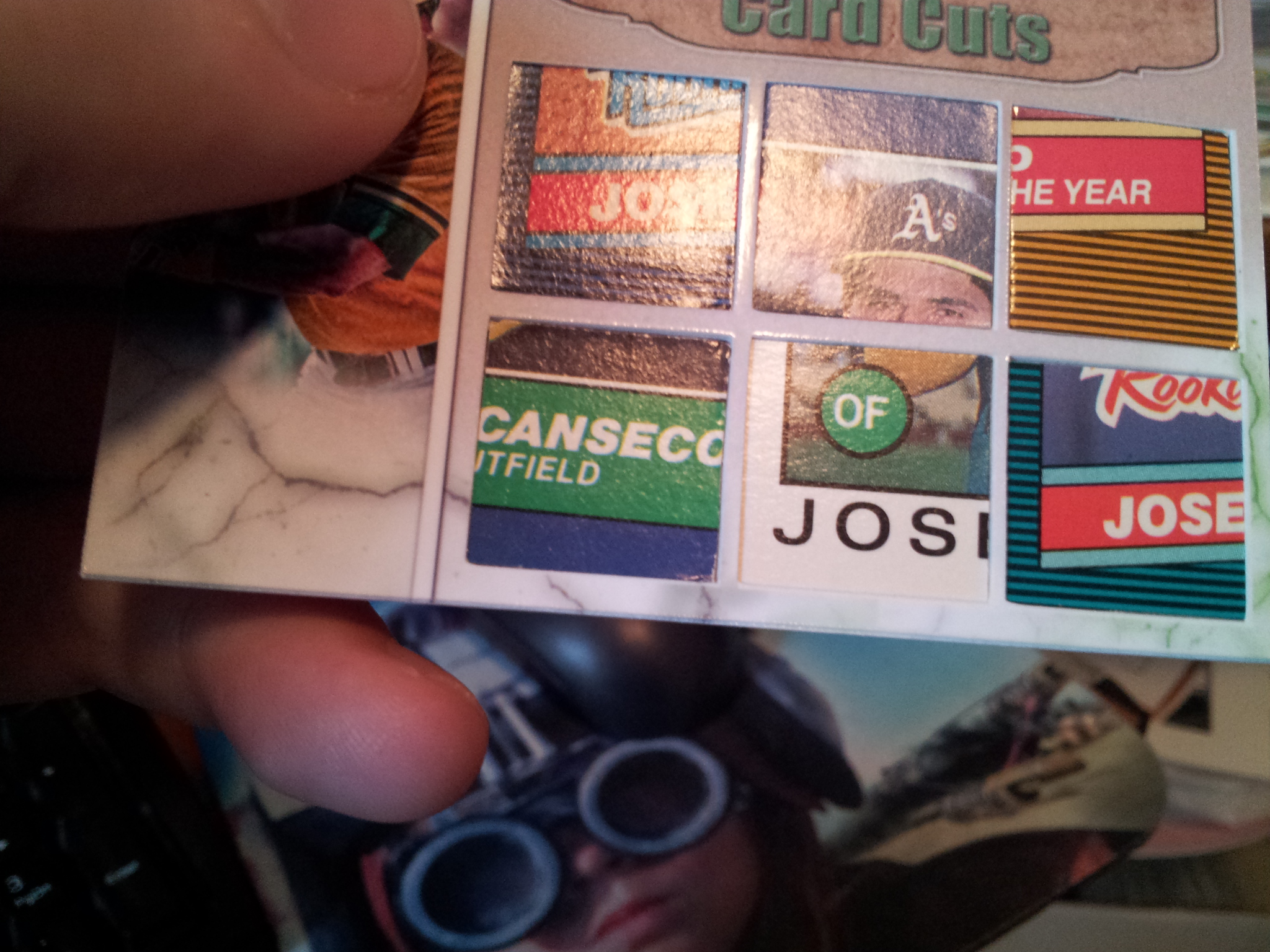 I wasn’t too terribly happy with the finish of these, but after sleeping on it, I figured out a better way to display these, which I’ll show in a bit here.

A booklet can’t just have card pieces though.  It must have some other type of material.  How about some jersey and bat material? 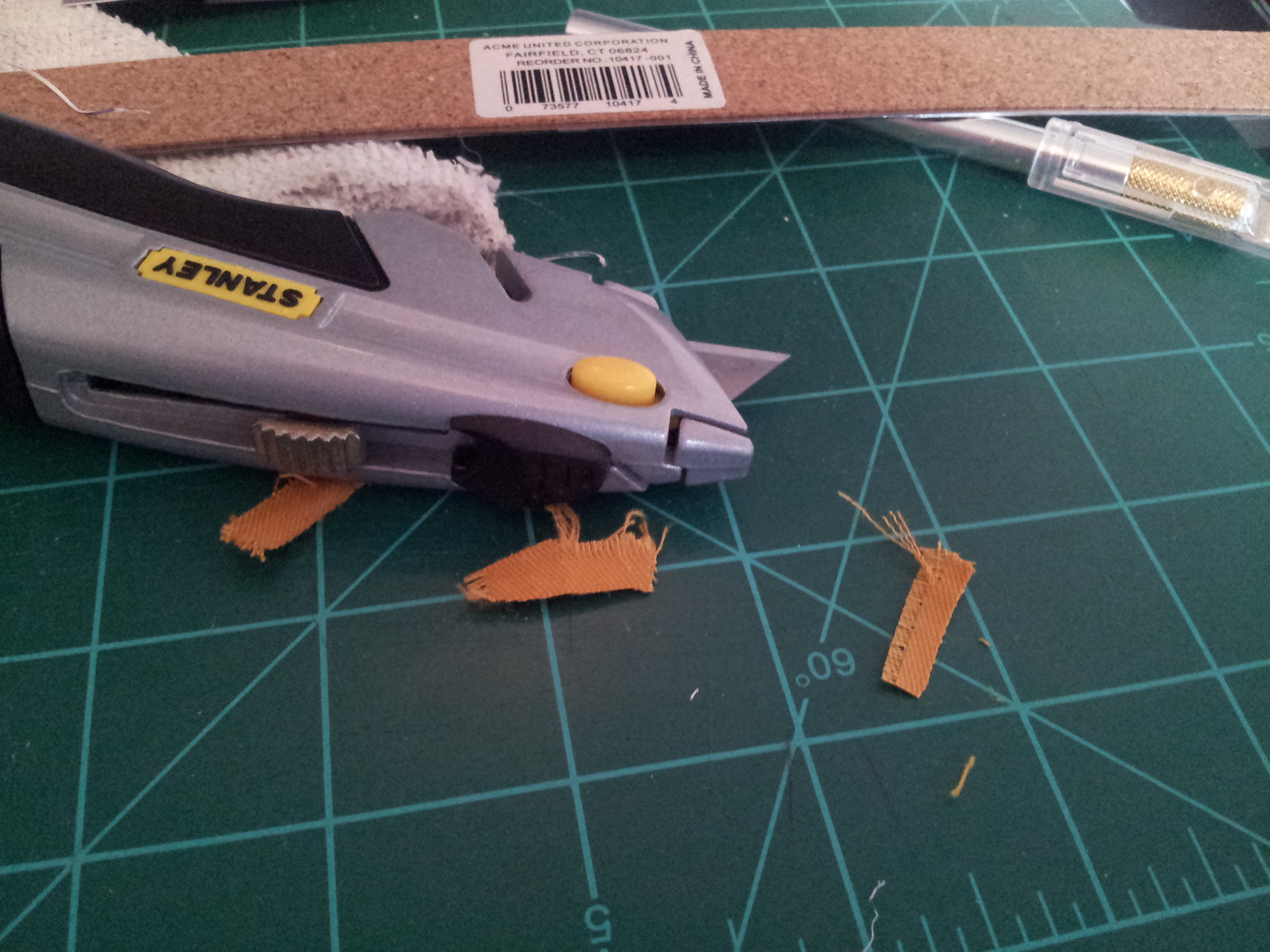 Yes, the card has game used jersey and bat material!  I confess though, to add a little more variety, I did add a little non game used fabric to brighten it up as well.  This really made me wonder – what is keeping the card companies from doing the same?  You could have a large white chunk of game used material, and overlay with some gold or green, or whatever, and still say the card is game used!  Things that make you go hmmmm…

Here is the bat piece I used: 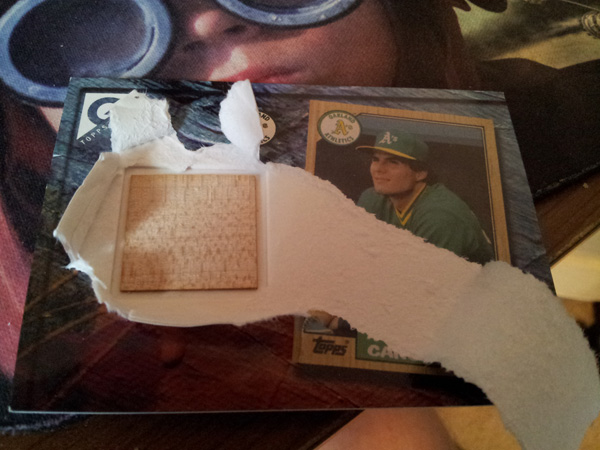 The jersey and bat pieces lined up to be used … 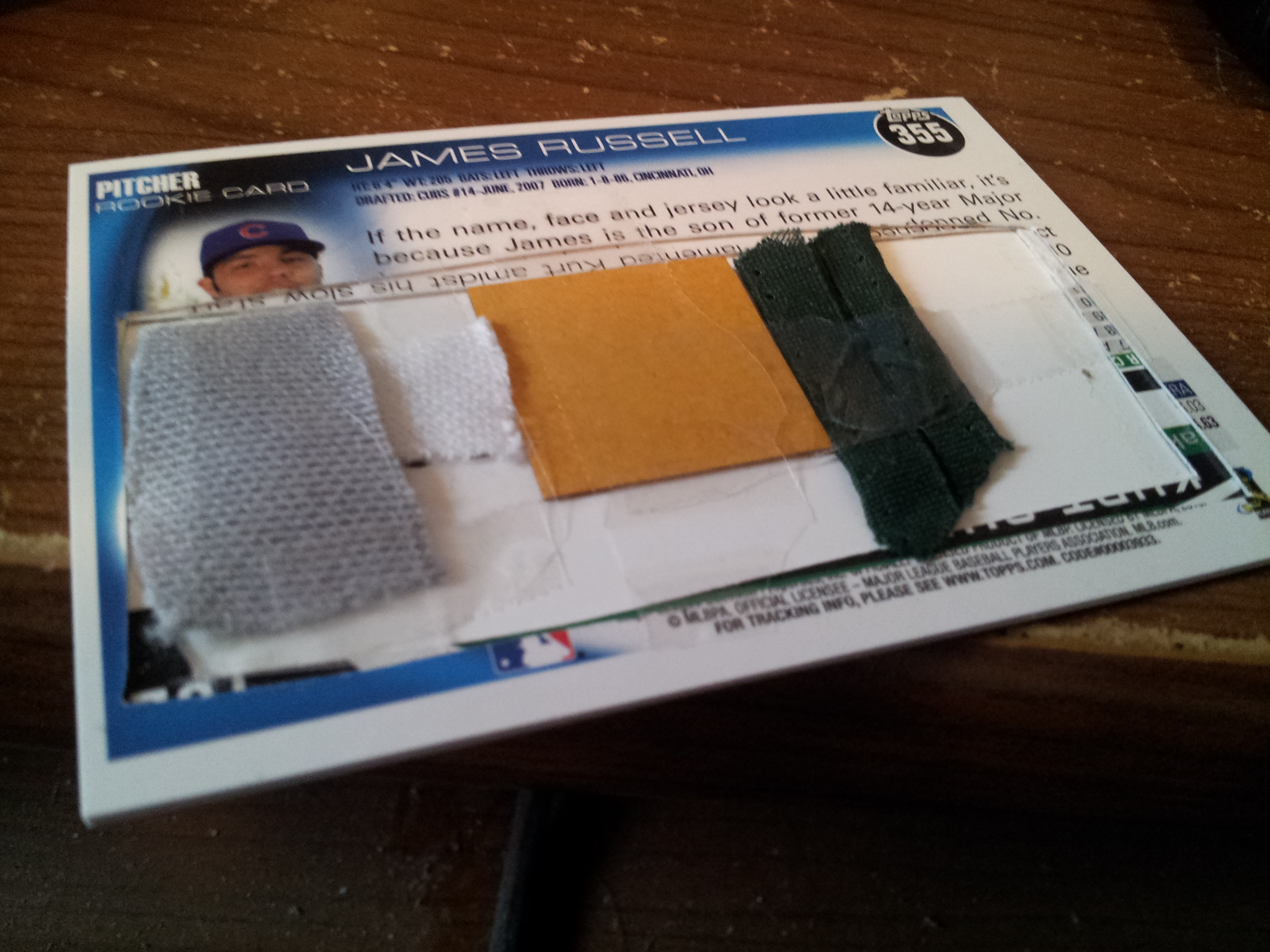 On the inside cover of the actual card, I just had to give thanks to those who gave me cards to work this project!

After sweating it out, and SEVERAL failed attempts, I was able to wrap it up …

The front of the card: 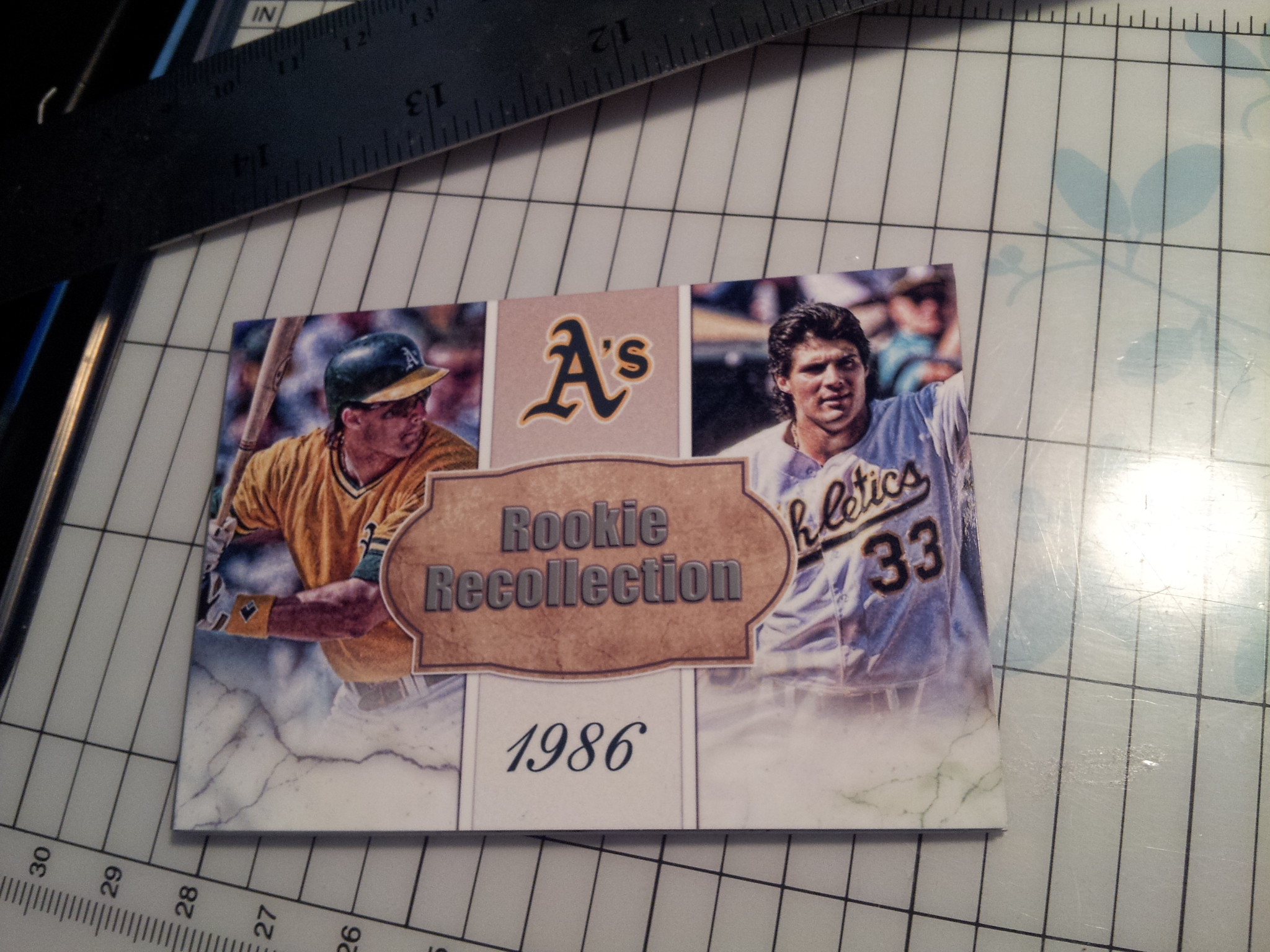 The back of the card:
Note that I did the back with reverse images of Jose, the A’s logo and 1986.  As always, I added some goof ball text on the back, and instead of “CONGRATULATIONS” like all the cards have, I put “HOLY TOLEDO!”  If you grew up in California in the 80’s and 90’s, this should mean a lot to you.  Whenever the A’s hit a home run, this is what you would hear from Bill King on the radio during the A’s game.  Ahhh, memories. 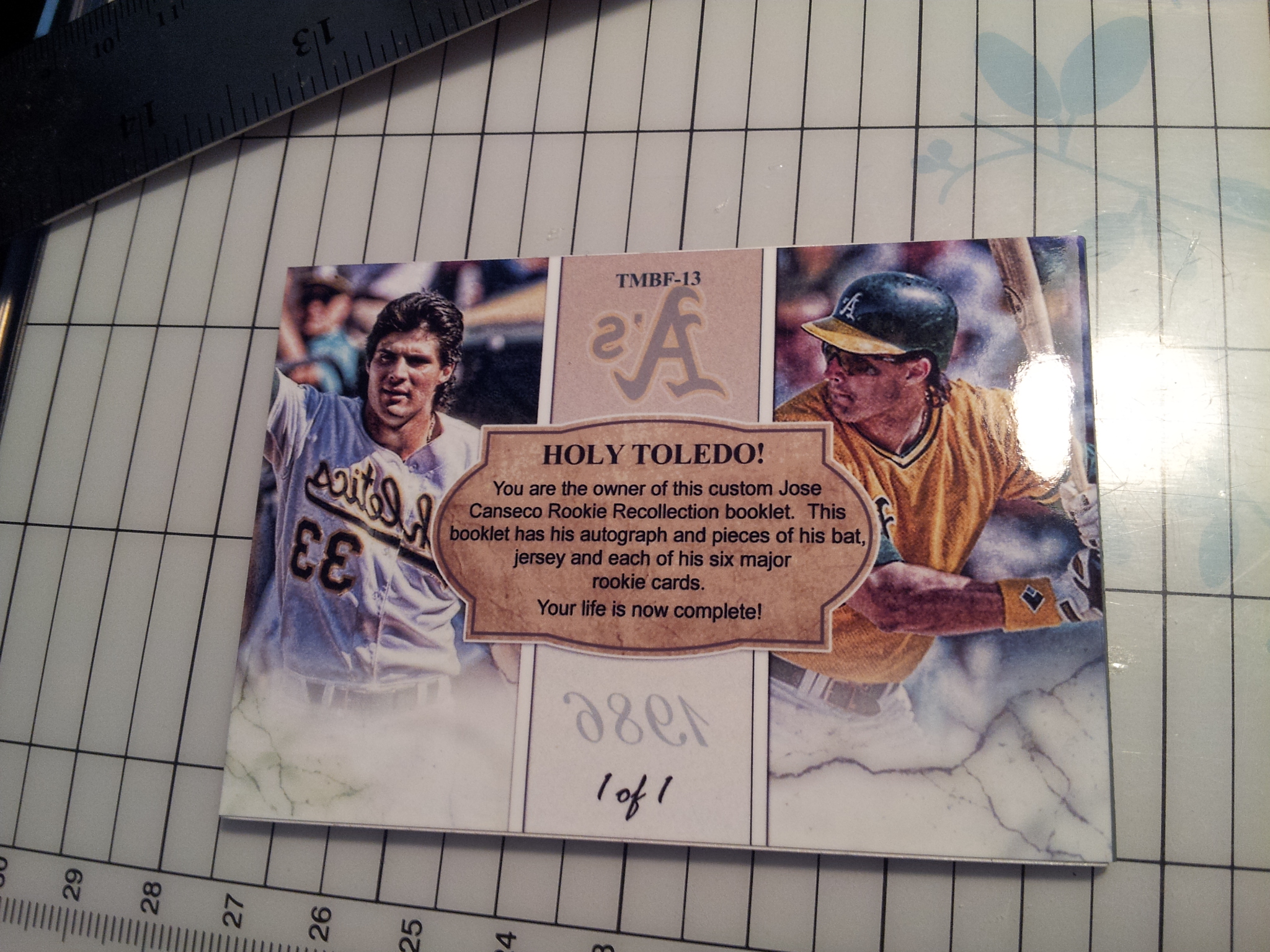 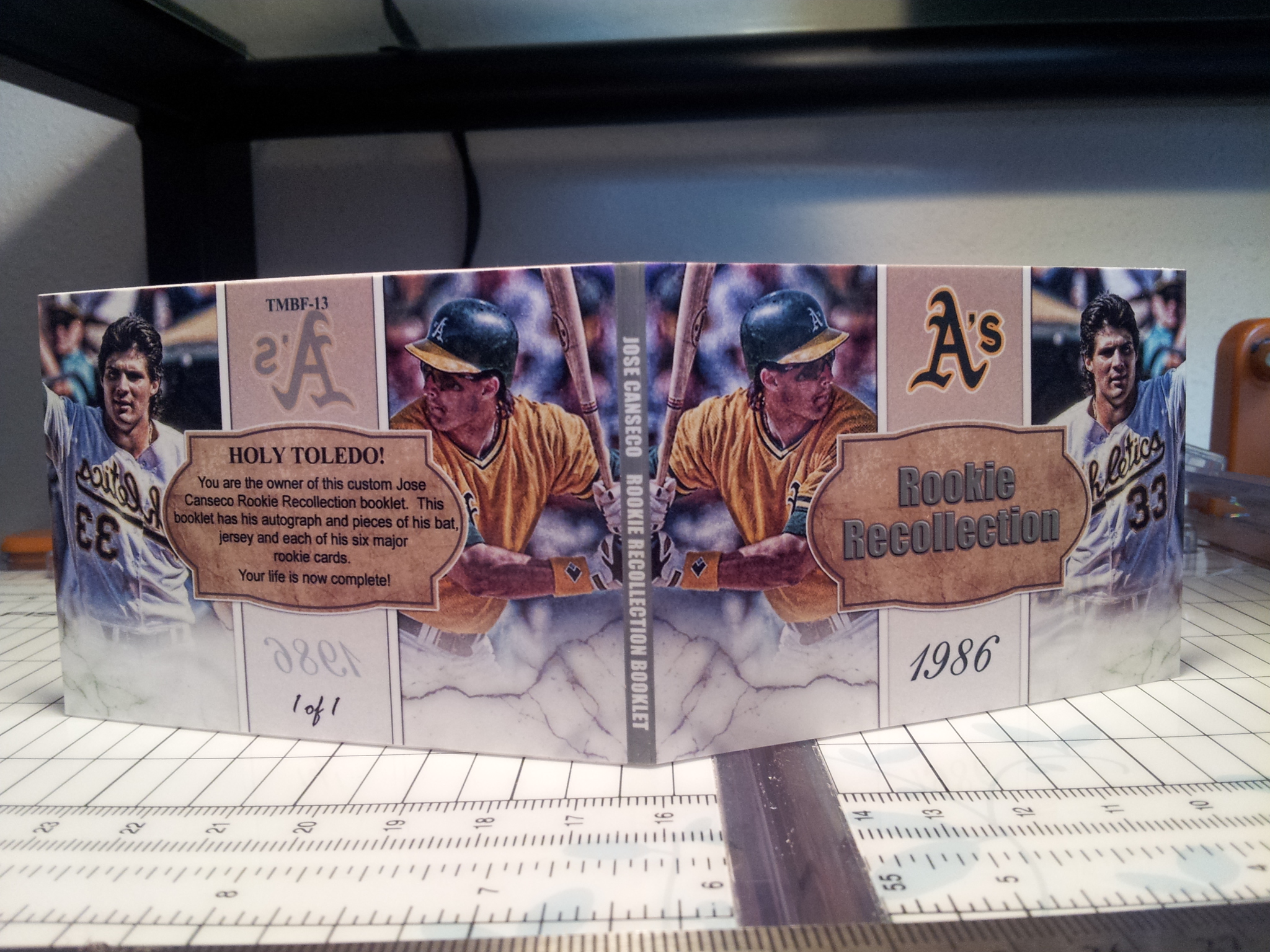 Here is the inside right of the card:
My first thought was to do a square for a jersey piece and a square for a bat piece, but this was much more creative / difficult lol!  The bottom area is for Jose’s signature, which I may get him to do an inscription of something about him being the Rookie of the Year. 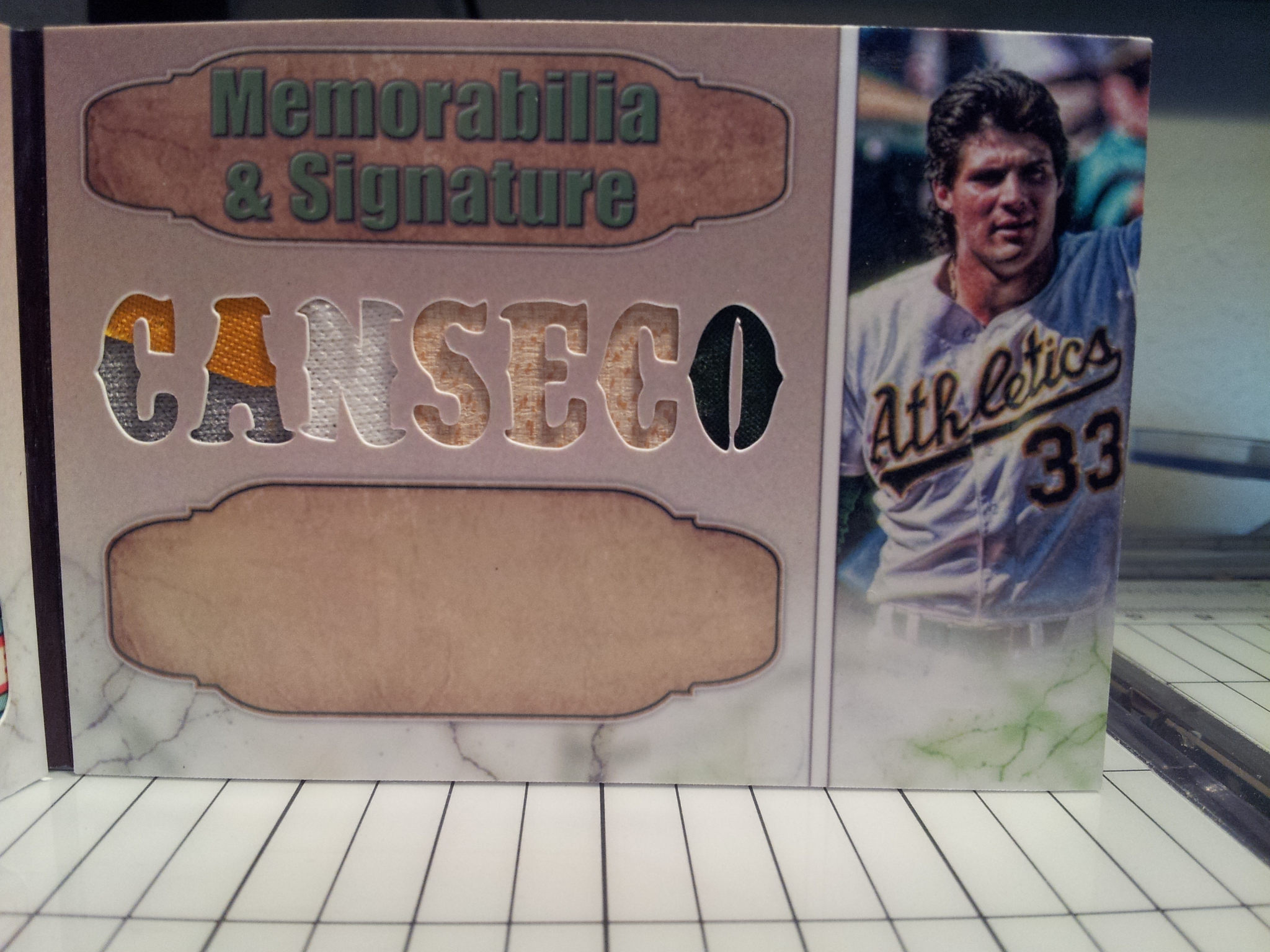 Last but not least, the inside left:
I LOVE how the rookie card windows came out.  It went from being rough squares to much a much more polished looking 6 piece window area with shapes that match.  I initially used a different shape, and it was way, way, way too girly, so this one below was the winner. 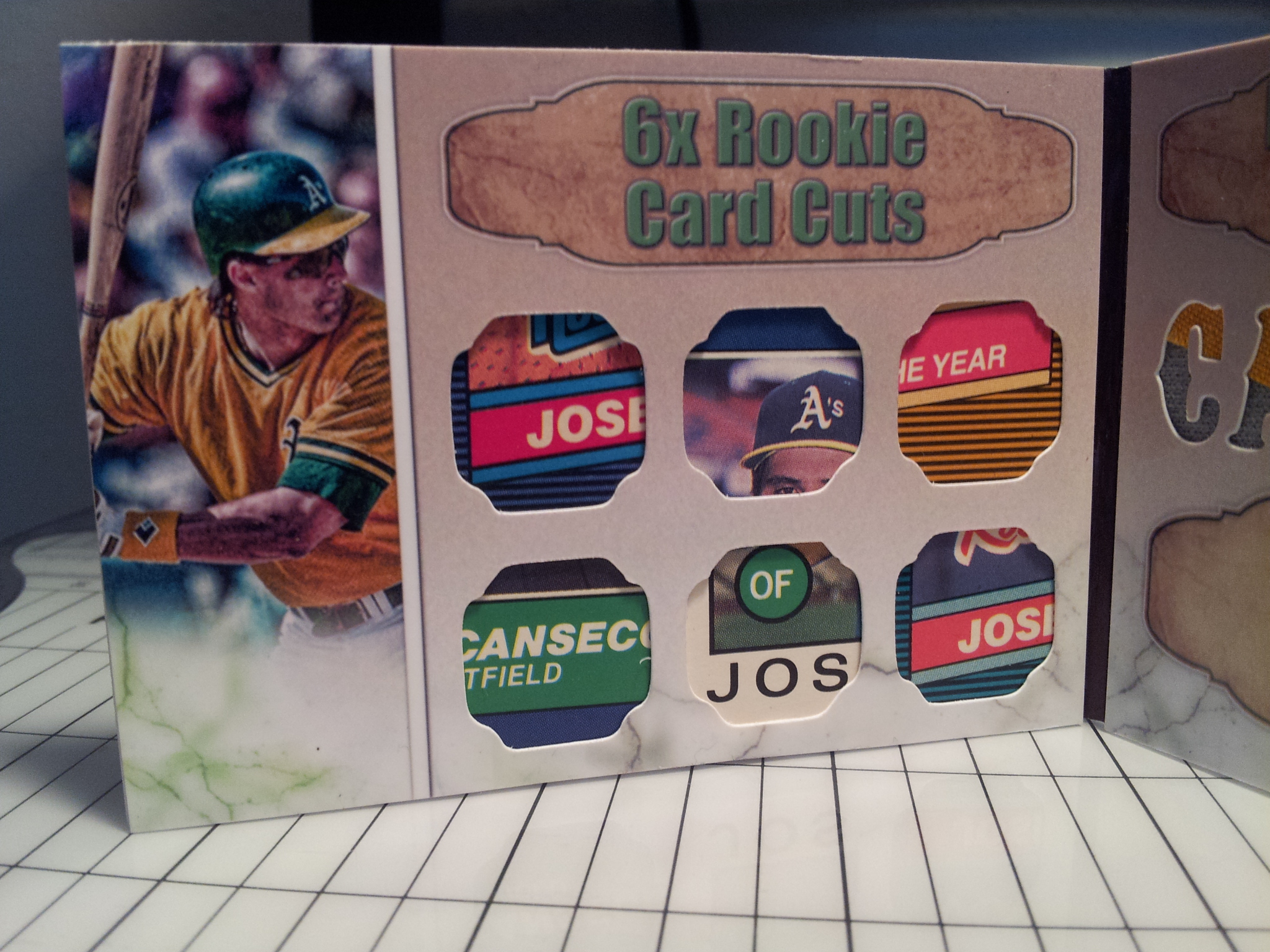 Both insides!
You will note that the inner binding is black.  I was going to leave it white, but my thank you message to the donators would have shown through, so I ended up doing it black, which I’m glad I did! 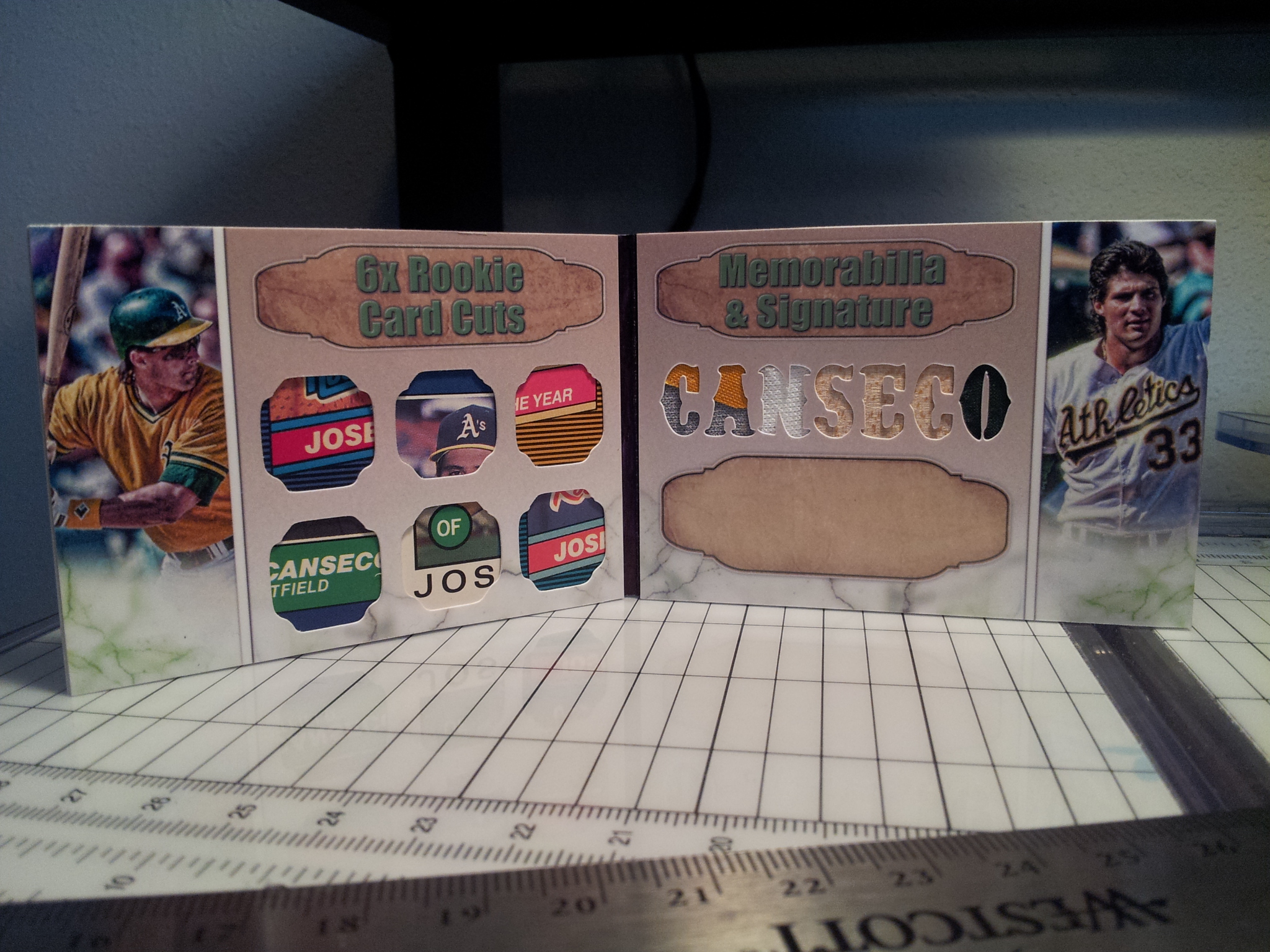 So, there you have it.  The 2014 Jose Canseco Rookie Recollection booklet.  When Jose signs it, it’ll be nice to have one booklet with pieces of all his rookie cards, game used jersey, game used bat and autograph!

I’ve been so busy making these, I’ve had a hard time looking for new cards to collect.  I have spent time putting my entire Jose Canseco collection online in a list format so I can show what my needs are.  I have a super collection by NO MEANS.  There is nothing really to marvel at.  99% are of the dime to dollar variety, so if you are interested in helping me to knock off some from my want list, I’d be happy as a clam.

Here is the most up to date list of what I have.  If anyone does decide to send me some cards as a gift, I’ll be listing them off on this list as who sent them to me.  It should be fun!   Click here for the link.

Thanks as always for reading!