If you are like me and you collect a specific popular player, you look online (and sometimes obsessively) for cards that you do not have.  Thanks to the explosion of inserts in the 90’s – on, there is no shortage of gems you can find.  My son will sometimes say “Dad, what are you doing?  Looking on ebay for Canseco cards … again?”

Quiet, boy … don’t you have some homework to do?

It is equally exhilarating to find a card you never knew existed as it is maddening to find out that the card you wished you had owned is way beyond what you would be willing to pay for it.  I can’t tell you how many times I put in a bid on ebay for a Canseco that I thought I had for $30 or $40, only to find it ended up going for $150 – $200.  Seriously?!?!?  Who are these people???  Do they think there is a piece of game used finger nail that comes with the card or something?

These customs are inspired in part by this non custom card that I saw for sale yesterday for a mere $650. 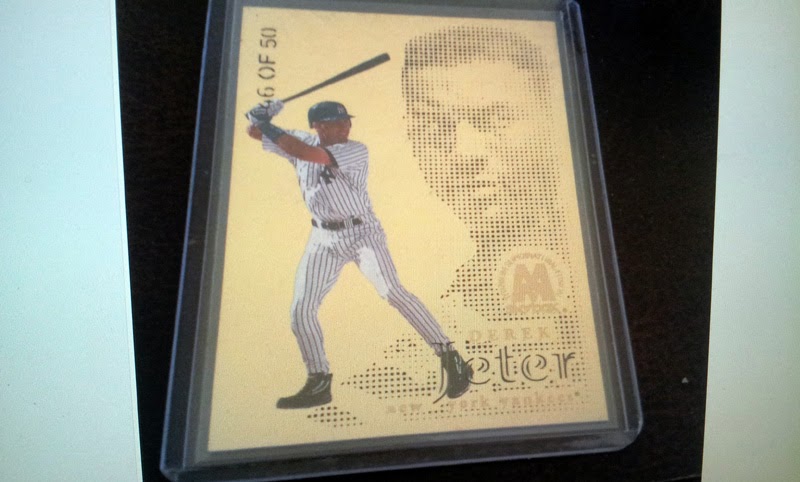 I have NO qualms with the cost of this (mainly because I simply don’t know the value) – it just simply is not for me…for that price, anyway!  UGH I woulda died 10 times over, if I ever busted a pack and found this card, or a Canseco equivalent!

Another way to have rare a card like this in your possession would be to either bust old wax now, or have busted wax a few decades ago.  I don’t open many cards these days, but I lived for it back as a child.  My favorite place to go to was the Bullpen in Fresno, California.  I went there each weekend, without fail.  When I moved to Texas, I would ride my bike every allowance day to the card shop down the street, and spend it on cards as well.

Truth be told, never once did I pull a monster card as a child.  It is probably easier to pull a 1 of 50 card now, than it was then to pull a 1 of 500 just due to the sheer volume of cases the card companies were pumping out.  13 year old me didn’t stand a chance with my $5 / 2-4 packs of cards a week ritual.  The big pulls for me were base cards  of Griffey, McGwire, Thomas and of course, Canseco.  Every once in a while would I pull an insert, but nothing serial numbered.

Last year, I sold off 99% of my child hood collection of Canseco cards (which I am now rebuilding).  As I went through them, not one of them were over $10 in value, if I recall correctly.  That kind of gives you an idea of what I was working with.  I can’t imagine the kids these days – and you know the type I’m talking about – crooked hat on with a flat bill with their own you tube channel.  Rap music going on in the background while they bust through Triple Threads boxes.

My, how times have changed. 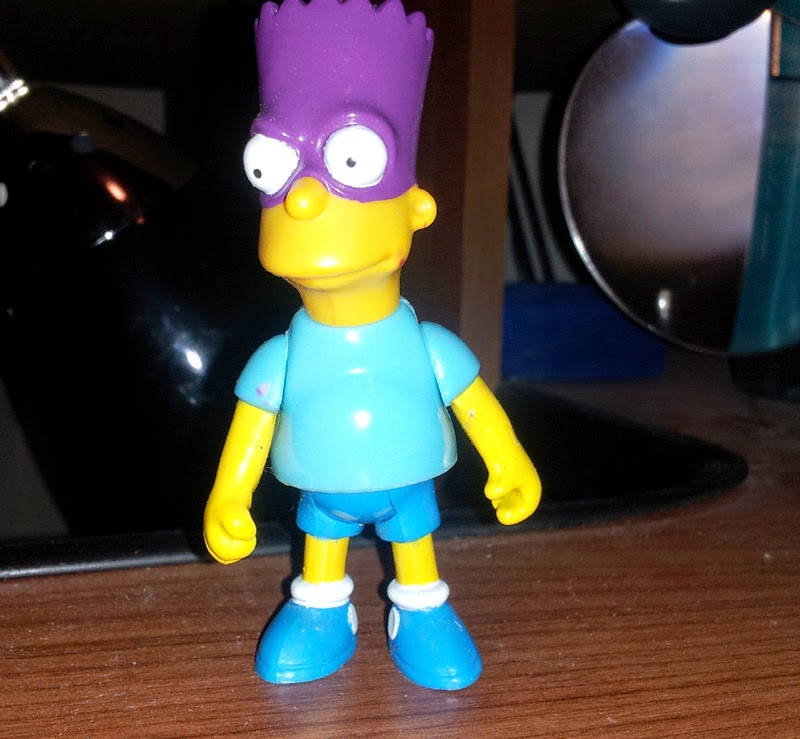 He’s gonna be my assistant in a bit, so hang tight and all will become clear (pun intended).  BAH – you don’t even know what the pun is of…just keep reading, will ya?

With the uber pricey Jeter as inspiration, I started thinking of a few things.  What if I could do something

I had an idea in my head, and started to work it.  This has been the first time in over a week that I have been able to mess around with a custom for my own personal collection, so I was quite eager to dive in, head first.  It has been a mega busy week.

First, we know the subject:  Jose Canseco.  But how should I approach this?  Do I go for an A’s card like I normally do?  Nah.  I want something a little more funky.  AHA!

What about the Angels?  Jose never played for Anaheim, but he did have a few cards with them.  The pics of him on the Halo squad are slim to none, so I had to get a bit creative. 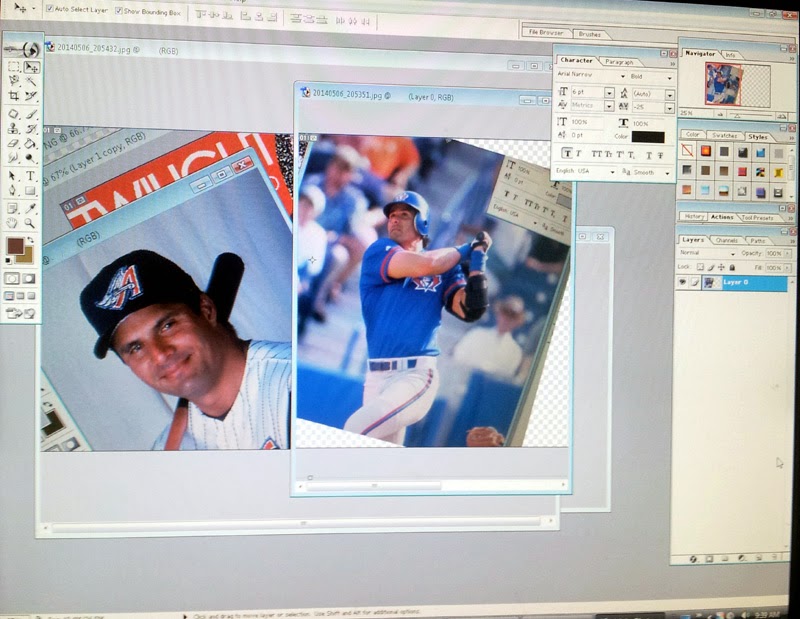 Using him as an Angel AND a Blue Jay would be so loserly.  (Reference to hilarious Twilight video clip here)

Okay, let me get back on track here.  As I was saying … Angels + Blue Jays on the same card = no thank you.

You know how when you are looking for something, but can’t find it – makes you want it more and more?  That is what happened to me with this Angels scenario.  Ahhh, if only I could find one of him like this Blue Jays picture, but only in an Angels uni.

I didn’t want to just use the big-face Canseco pic.  Don’t get me wrong – Canseco Big-face is a great pic, but it kinda sorta reminds me of a Fat Elvis.  The man isn’t fat in this pic, but compared to his action shots, he didn’t look like an athlete.  No, Canseco Big-face almost looks like he could pull off being a coach, or something.

Being the photoshop ninja that I am, I got a little creative.  I found an Angels jersey online. 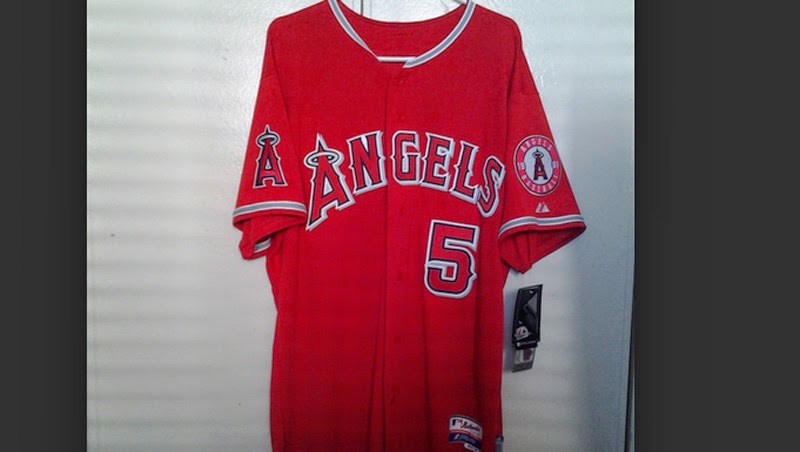 Then … BAM!  Canseco knocking one out of the park as a member of the Anaheim Angels. 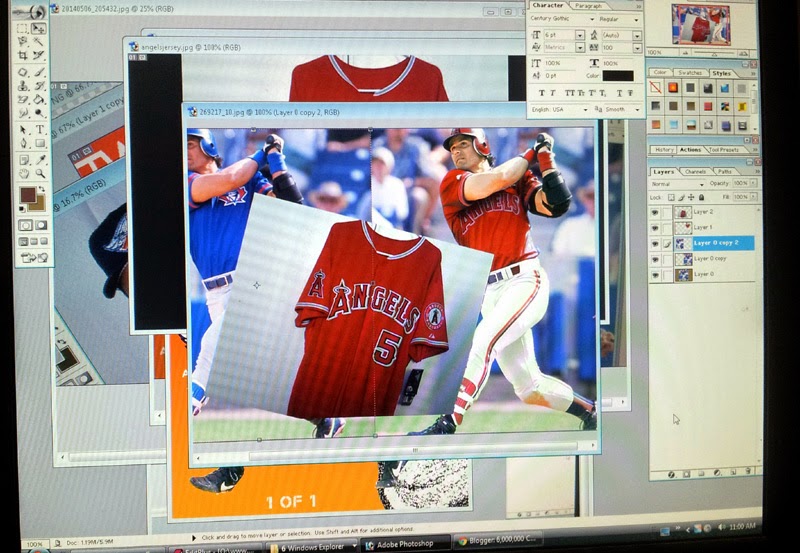 So now, we have Canseco Big-face AND Canseco the athlete for my new fancy 90’s faux pc insert card.

I don’t want to bash the Canseco Big-face, because that part came out pretty freaking sweet.  Check this out: 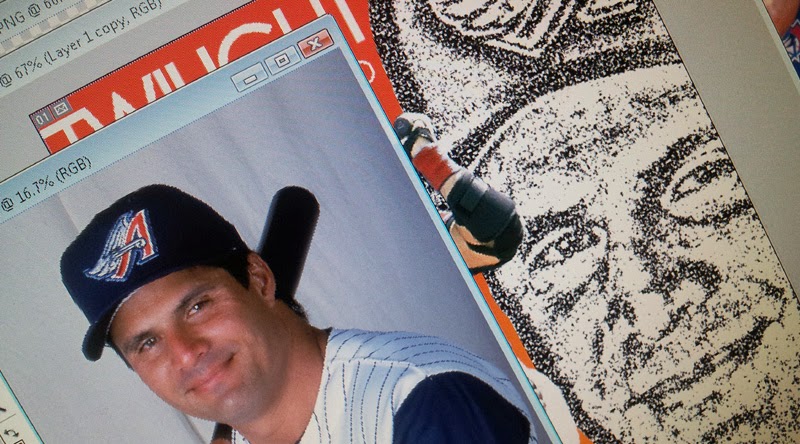 Meh, I guess it doesn’t look as good as it does on the card itself.  As you can tell, I was getting a little artsy on this one.  I didn’t want to do anything like the Jeter gold card I posted above.  I wanted this to be more original.

Before I show it, did I mention I got to wear a MASSIVE hat while eating dinner with friends and family last night? 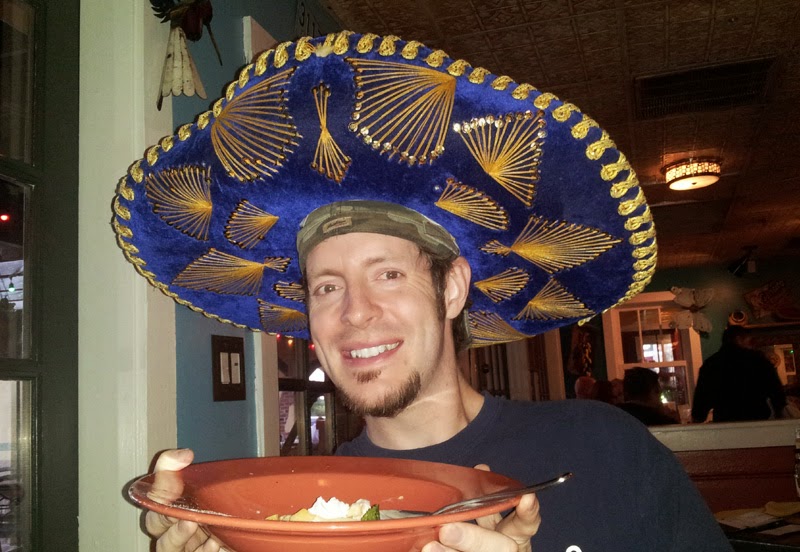 Early birthday din-din at my favorite mexican restaurant.  The dessert was free, but I have to admit, I’m not a flan.  Wah wah wahhhh.  (In case you missed it, it was flan.  The dessert was flan.)  I decided to wear the (surely) lice-ridden hat throughout the rest of the 30-45 minutes we were there.  Which reminds me, I probably should get the hat I was wearing beneath it washed.

Okay, so on with the show.  I created these custom cards and named them “Twilight” – btw, I *PROMISE* it had nothing to do with the movie.  I’m not a Twilight freak, nor am I much of a fan.  I do not have a crush on any of the characters, nor do I have an Twilight tattoos on my person.  #teamedward – gotta give props to my fellow pasty white brotha.

I named the card insert type “Twilight” because this is when Canseco was in the very end of his career.  I feel that there is a potential to do one of Jeter, Griffey, Thomas, etc as well at some point.  Card makers tend to do remakes of the superstars from the 80’s and 90’s with pics of them while they were in their prime.  Why not celebrate them while they were in the Twilight of their careers?  Not many are doing that.

So, here they are – the two latest pieces in my collection:  See Bartman, and get the pun now?  I used him to show that the one on the left is partially clear. 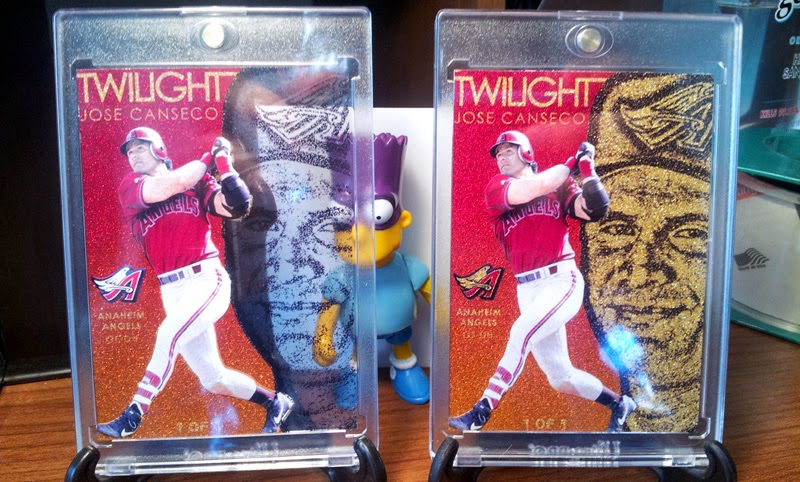 Not impressed?  Here is a pic of the cards being held by UFC fighters Anderson Silva and Forrest Griffin: 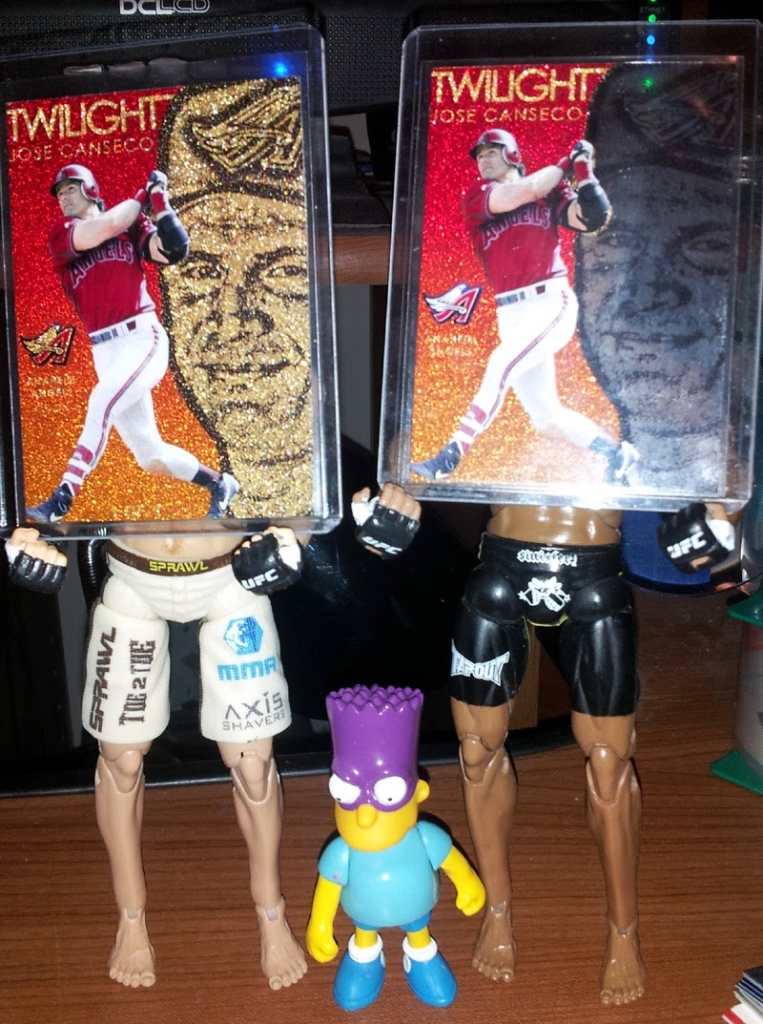 The material used for the left card, and the left part of the right card is a gold glittery type of material like Topps uses for their gold paralleled cards.

I’m really not sure which I like best … the gold / clear version, which has my wife’s vote: 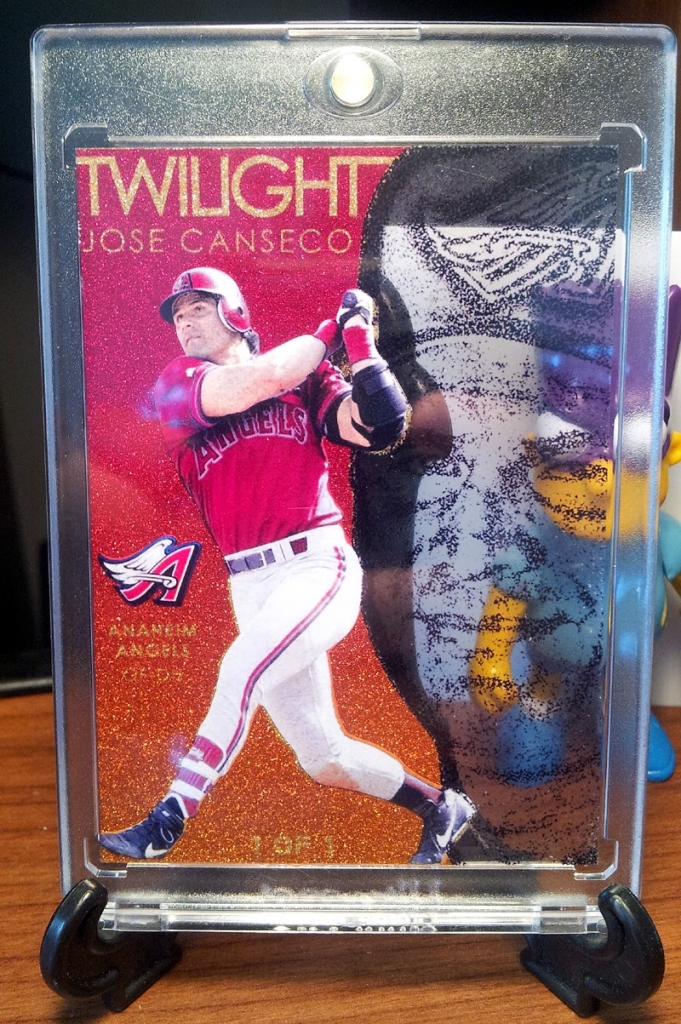 or the full gold version, which has my son’s vote: 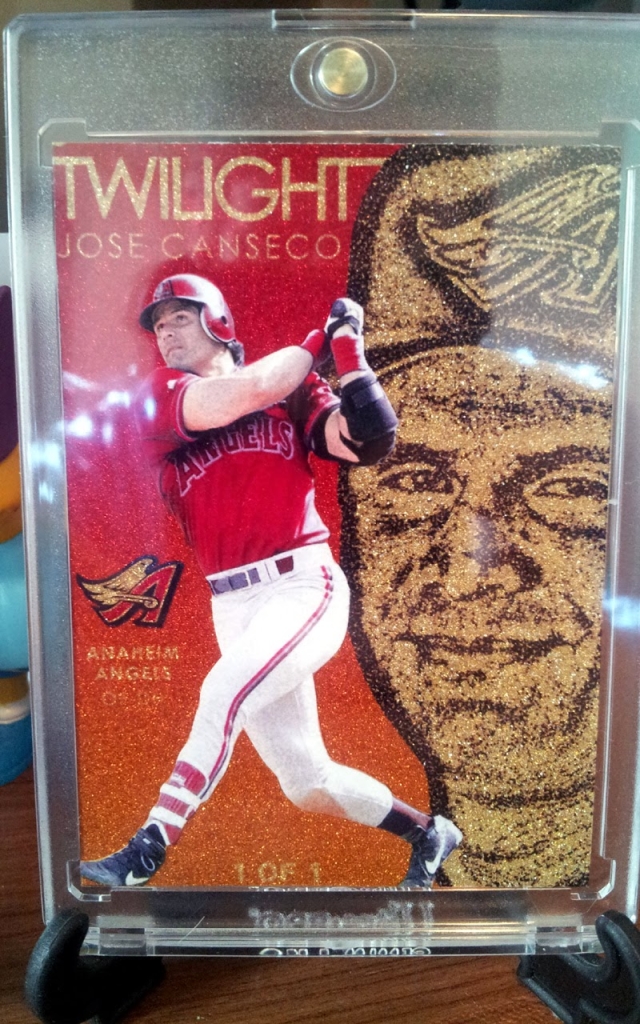 In case you couldn’t see it:  WHAMMO – 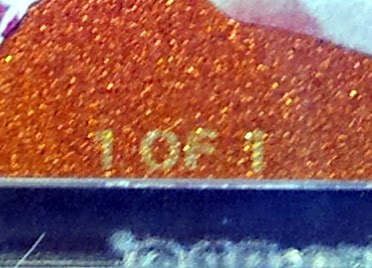 I look forward to making more different types of cards in the near future, as time allows.  BTW, If you haven’t checked it out, please take a look at my Flip Quest link – I’d love to trade with ya!

So that leaves me curious – which version do you like best?  The full gold or the gold / clear version?