Rollin’ with Nolan – I met him, got 6 autos including a custom book … pics inside!

As an avid reader of Beckett when I was a child, I absolutely loved an article they did entitled “Rollin’ with Nolan”. It was an interview-style article, which highlighted Nolan offering pitching lessons to a baseball card dealer in exchange for his own rookie card.

He cited the reason his offer instead of cash was because of how expensive the card was.

The article ended up being an April Fool’s joke, but it stuck with me.

Fast forward to this past weekend. We went to a book shop about a half hour away for our friend’s book release party. I got to talking to her dad, and the book shop was going to have Nolan Ryan do a book signing session. 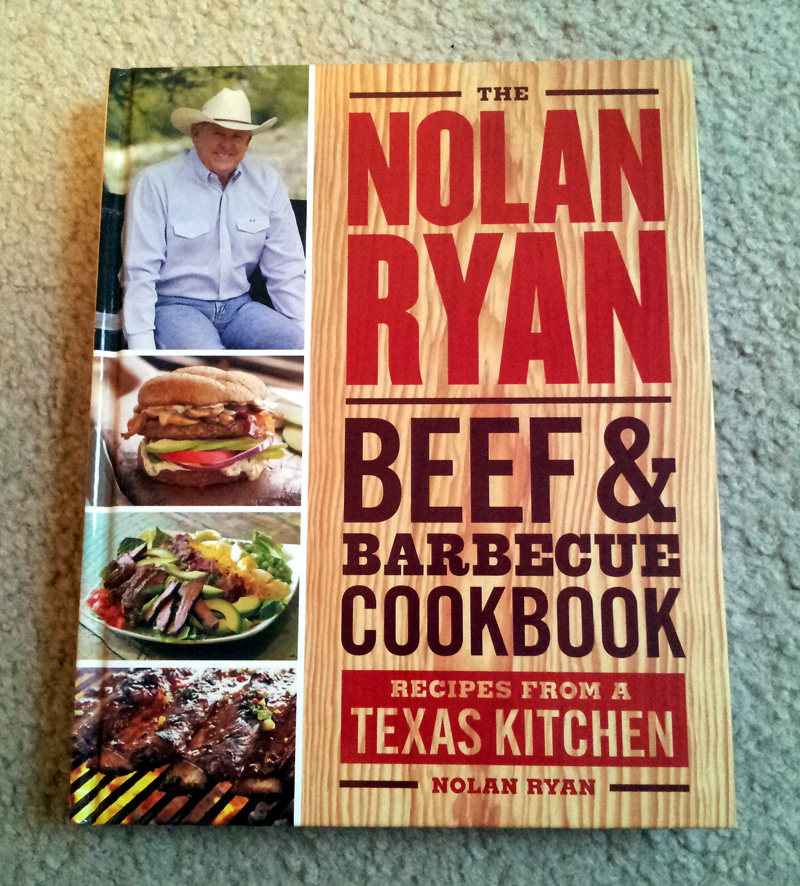 The Ryan Express. The man who has 7 no-nos, over 300 wins and over 5,000 K’s. Never in a million years would I have thought that I would have been able to get the chance to meet him.

I’ve had autographs of him before, but that is just a “think”. Seeing one of baseball’s biggest pitching legends and having him sign for you is a completely different animal.

This book is NOT something for the health conscious person, by the way. Here is some evidence of that: 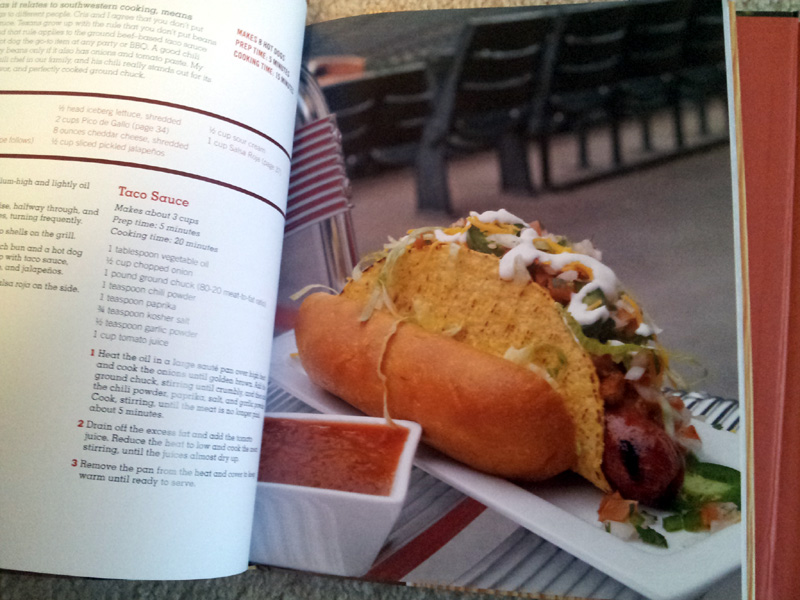 It doesn’t really excite me to bring a baseball to have signed, or anything like that. I, of course, want my own custom art to be designed. Many of you have seen the first two, and I’m happy with how they came out, but the booklet that I did has got to be one of my favorites! 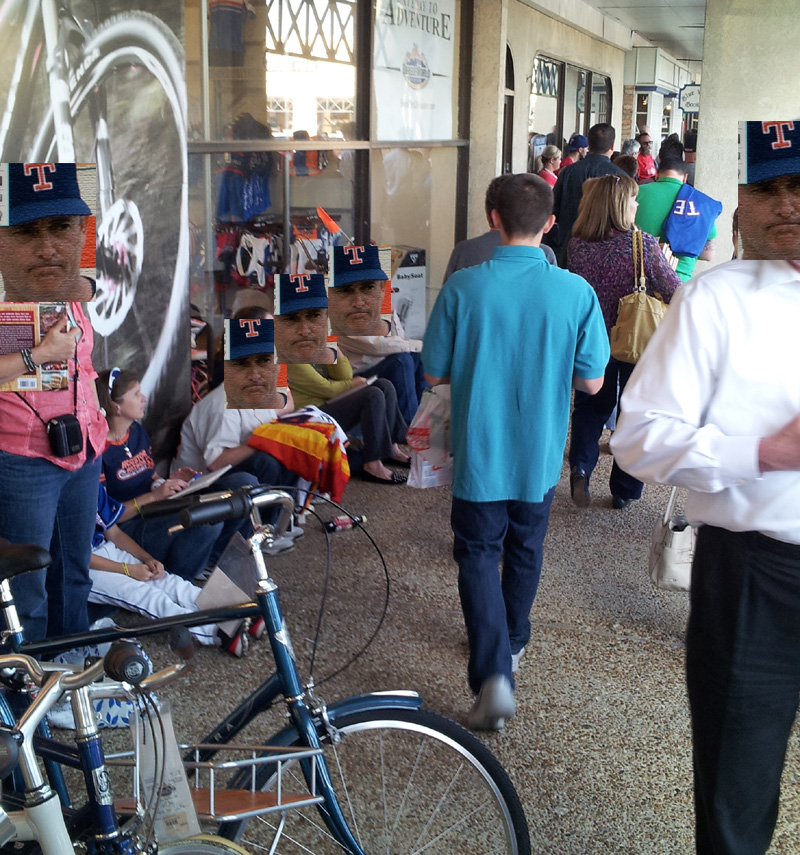 See? I’m a gentleman … I blocked out … no … I Nolan’ed out all of the people’s faces in line. This pic doesn’t do justice to show how many people were there.

They were VERY specific – if you buy one ticket, you get one book signed and one memorabilia piece signed. You cannot buy 64 books yourself to get 64 things signed. So, I did what any sane person would do, and bought three! 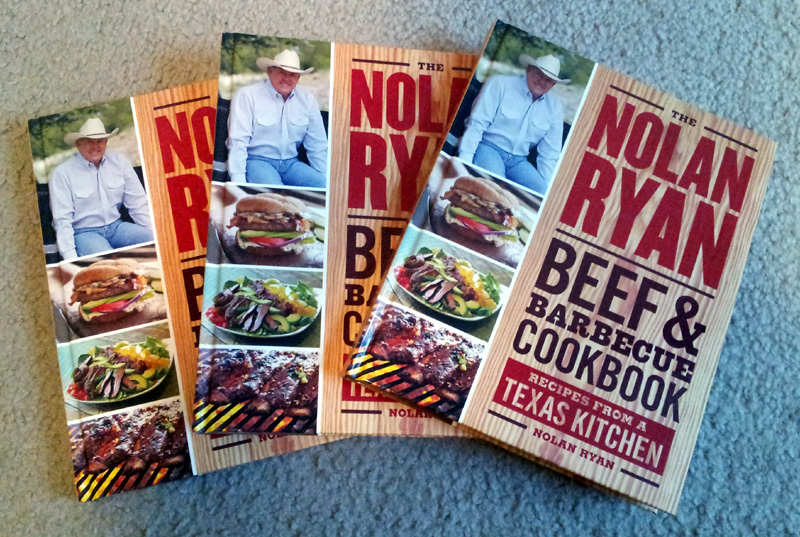 My gracious wife, and didn’t-have-a-say-in-the-matter son came along. It took forever, and though someone tried to cut in front of us, we cut right back, and got our autos! The book shop said I was fortunate to have snagged the last tickets – PHEW!

We did have to jump a few hurdles first though. There was talk that after 8pm, it would be cut off … the time was getting VERY near to the end. The other issue was that there was discussion about if he was signing the book AND the piece of memorabilia, or just one or the other.

My whole reasoning for getting three tickets is I figured that I would be able to sell the books, and have myself 3 nicely autographed customs for free. The last thing I want to do is sink $80+ on this.

Suddenly, all my worries melted away …. 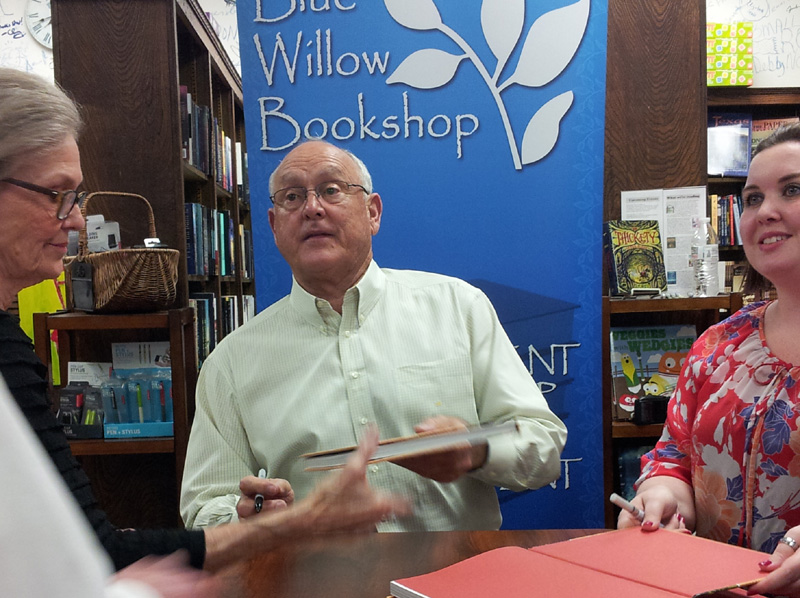 My dreams of sitting in his lap for him to tell me about all of his favorite pitching stories were quickly dashed, when a military-like order list came about.

My confrontation was reduced to a “Hi, Nolan how are you?” “Fine, and yourself?” I told him I created the cards I was having him sign, and told him that I made a refractor for him to keep. He thanked me, and after the signing we went to the side where I carefully, yet frantically waved the cards in the air to dry them before they went back in their sleeves … with my hands still shaking. 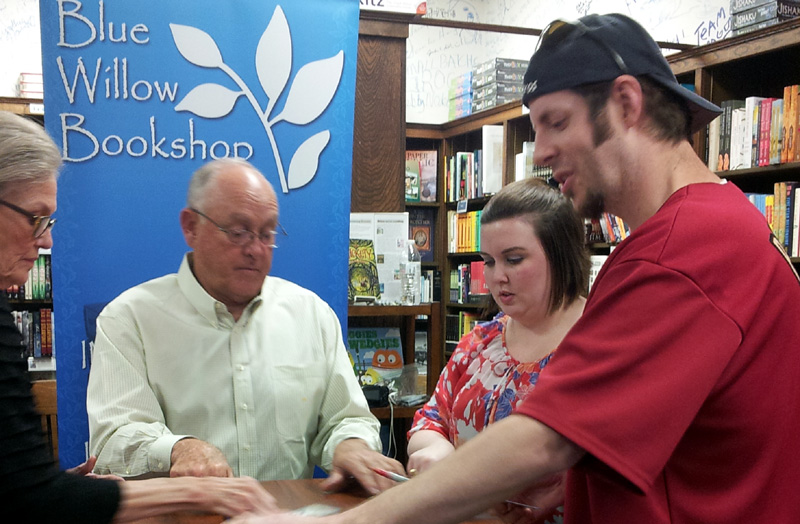 Here are all 3 books signed! 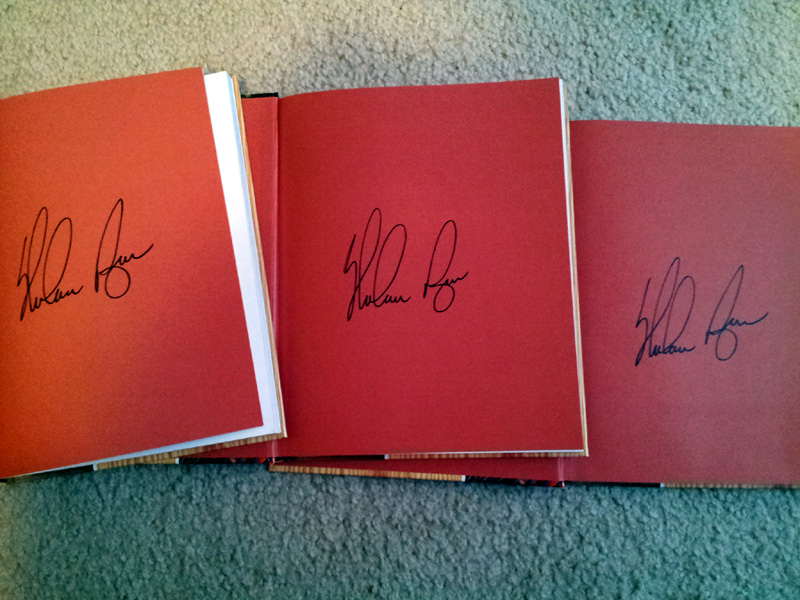 If you look at this next pic, you will see a few different color sharpies – why? Because I’m difficult like that. 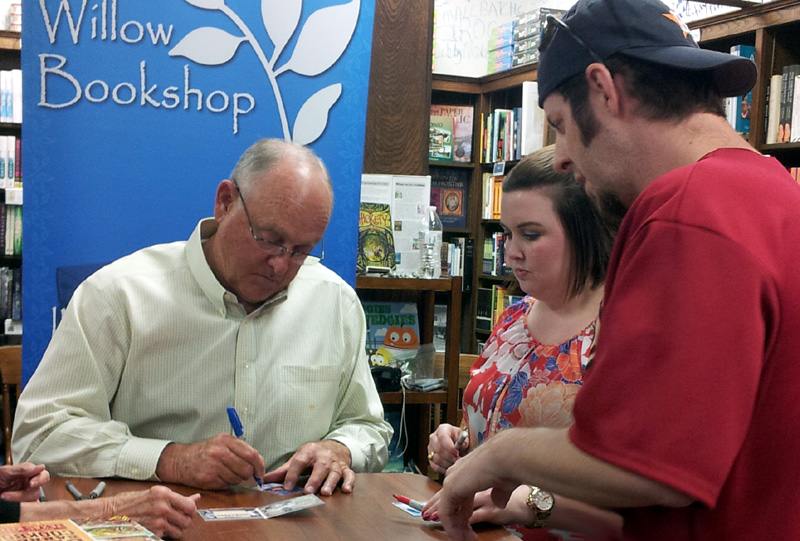 I busted my hump the entire day of the event to get the booklet done. The others were done already in anticipation of the event, (plus you may have already seen them) so I’ll show those first:

The first one, is a 2013 Topps Chrome Football style (an abomination, I know!) refractor. The border goes from red to orange to yellow.

I just had to do the football style of it, because I absolutely LOVE the design. The bottom artwork is so intricate, it took forever, but I think it came out mahveleous. I had Nolan sign in blue to complement the reds/oranges/yellows. 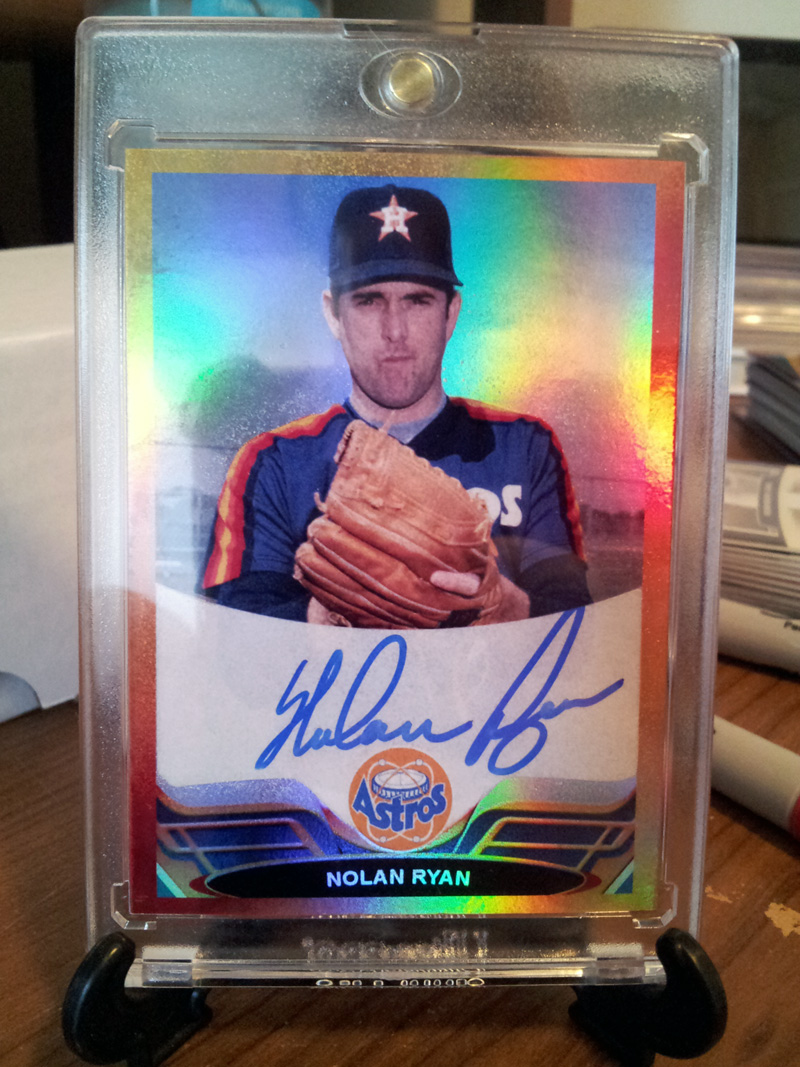 You will see that the card is #’ed 2/2. The card #’ed 1/2 is in Nolan’s possession. We are the only two that have this card. He has it displayed on his night stand, no doubt. I say night stand, because after 2 hours of signing, the man looked to be out on his stool, and ready for bed. (BTW, THANK YOU Nolan for signing!) 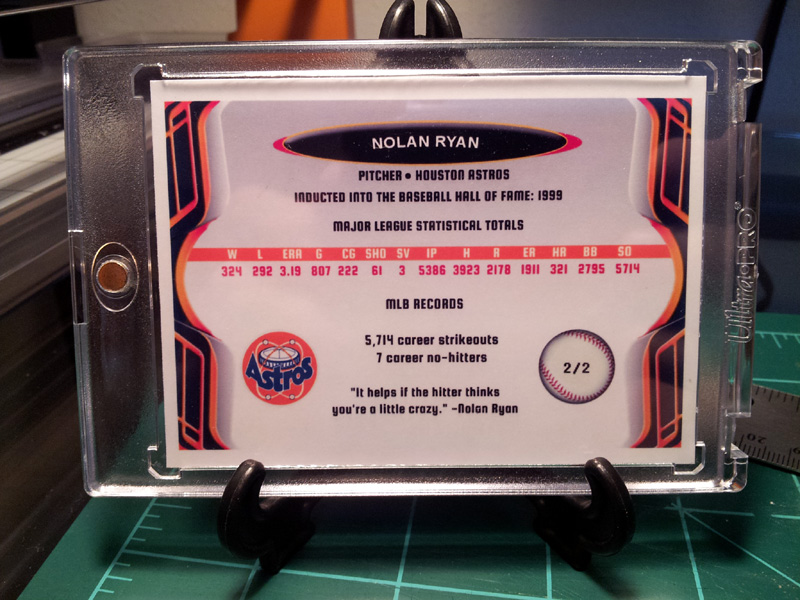 I had dreamed of that card – how beautiful it would look with a color matching refractor that gradiates from red-orange-yellow, with the Astros uni. I’m glad I made that one.

The next one is a “card that never was”. If you recall, 1968 Topps is his rookie. He shared it with Jerry Koosman. I really wished that Topps didn’t do this to all the rookie youngsters of the 60’s. No collector wants to have their guy sharing cardboard real estate with someone else!

Nolan first played in 1966, so I thought … why not have a 1966 Topps Nolan Ryan? And sign it in red? And make it a 1/1? And slightly fade at the bottom so the auto can pop more? Heck, why not have him sign in RED? The purple/blue on the card looks nice, but I thought the red would really make it stand out.

I think I like this better than the refractor. Just the novelty of it being a “card that never was” and the red auto. Love it! 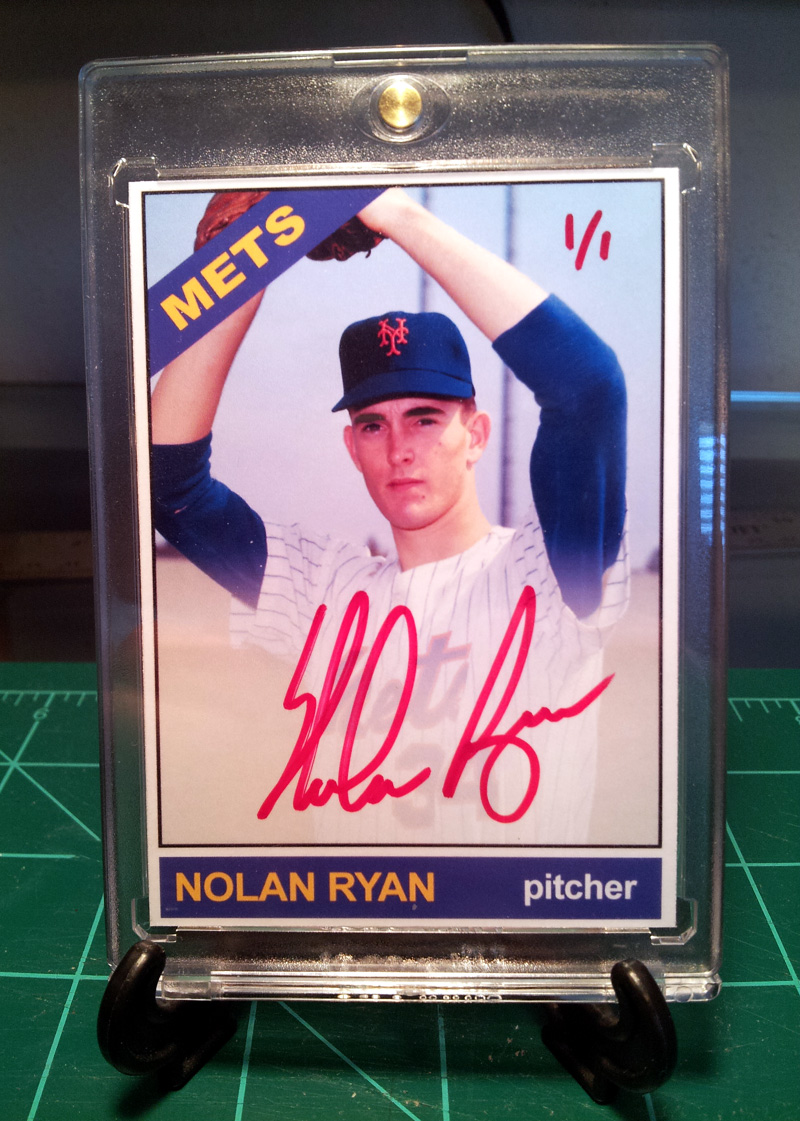 The back has a few things to note. First, I like how it ended up looking like an authentically aged back. In the holder, that is – it is a gloss type of card, like my cards are, but it doesn’t matter one lick, since all my cards are in holders anyway – you can’t tell the difference! 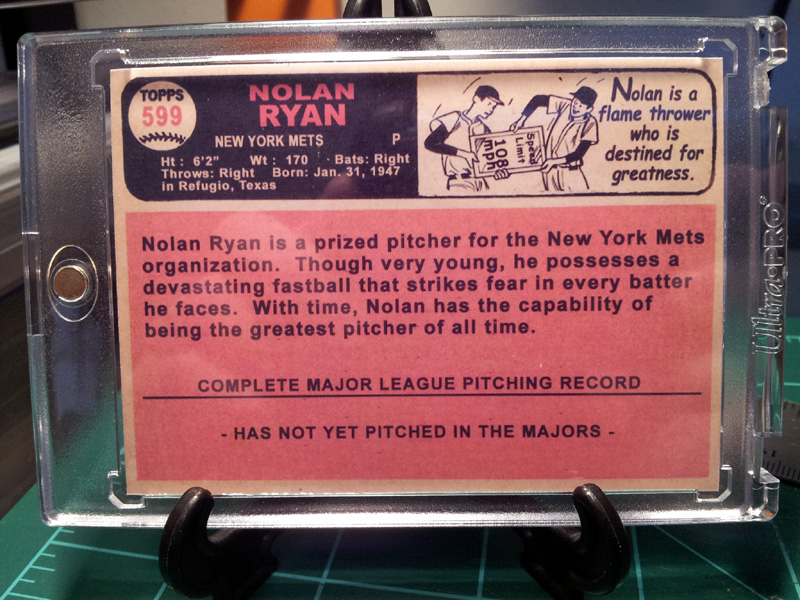 If you notice the cartoon of the players holding a sign – it says 108 mph. Nolan is (or at least was) marked for the fasted pitch thrown at 108.1 mph. I wanted to put that in there as a piece of little known history. This was something that the Guinness book of World Records had him in for – they measured the speed at the time the ball went out from his hand, as opposed to how fast it crossed the plate.

Lastly, here is the booklet. My prized piece of the whole day! I did a lot of photoshopping and tests to get this right: 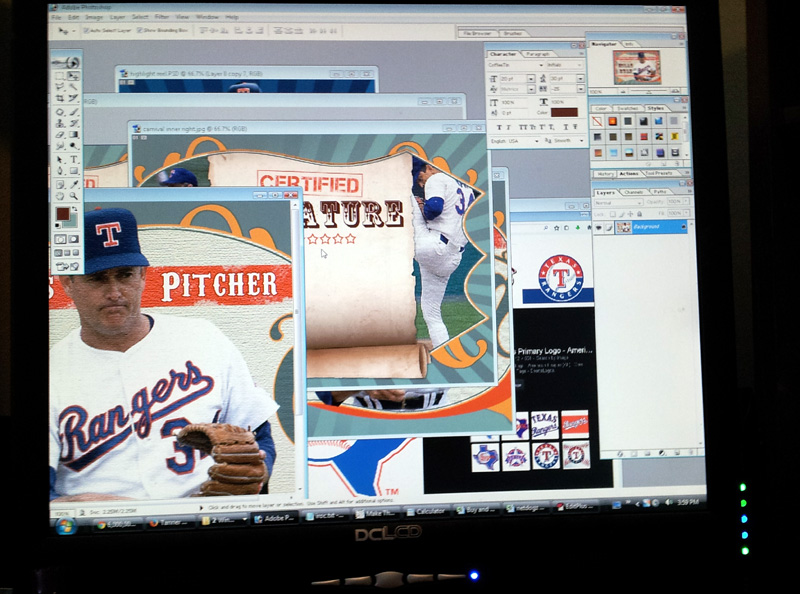 I couldn’t get it to print right at first, and had some cutting / scoring issues, so it netted me a pile of trash: 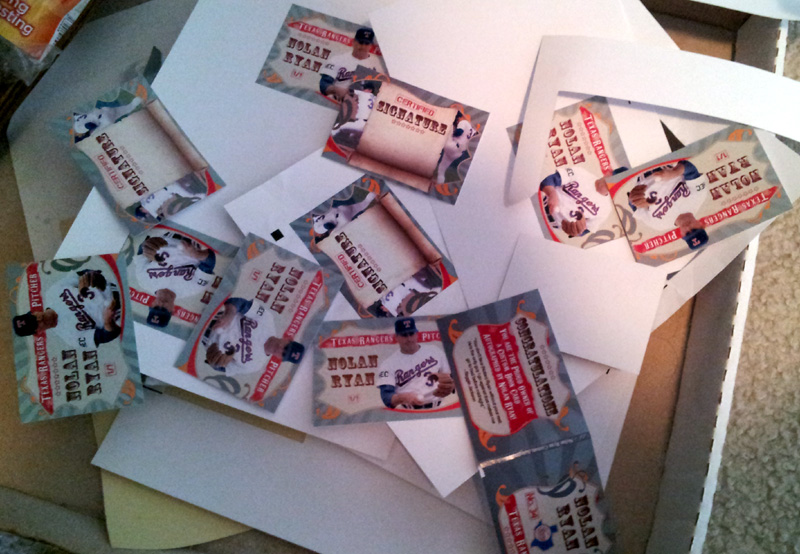 I used a piece of the trash to do a test to see if red or blue would look best. 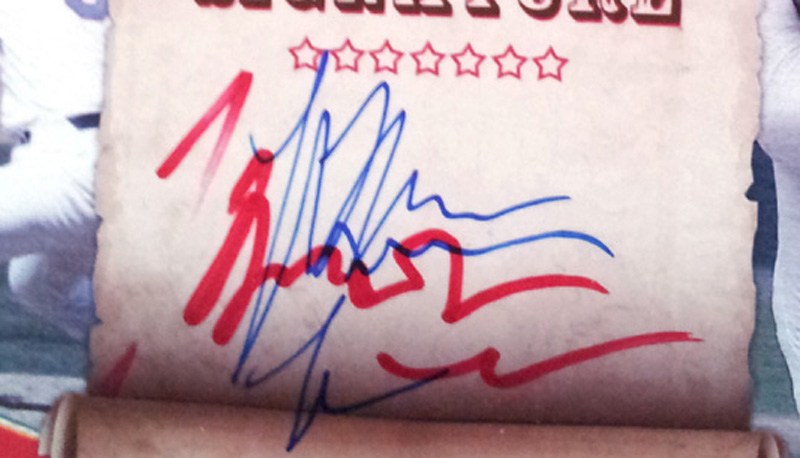 When the paper scrap settled, I ended up with this:

The outer front: 7 stars for 7 no hitters. 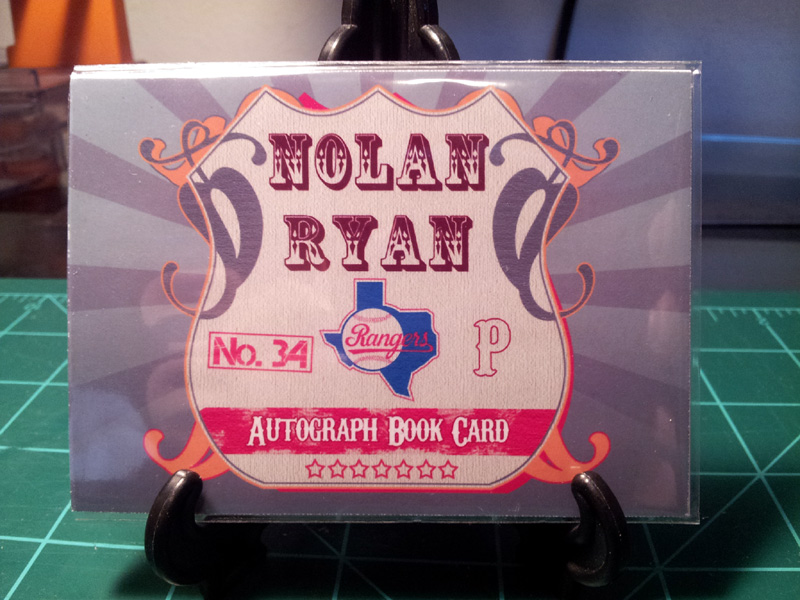 The outer back: WINNER replaced the typical CONGRATULATIONS because I really wanted to keep in line with my western / carnival theme. 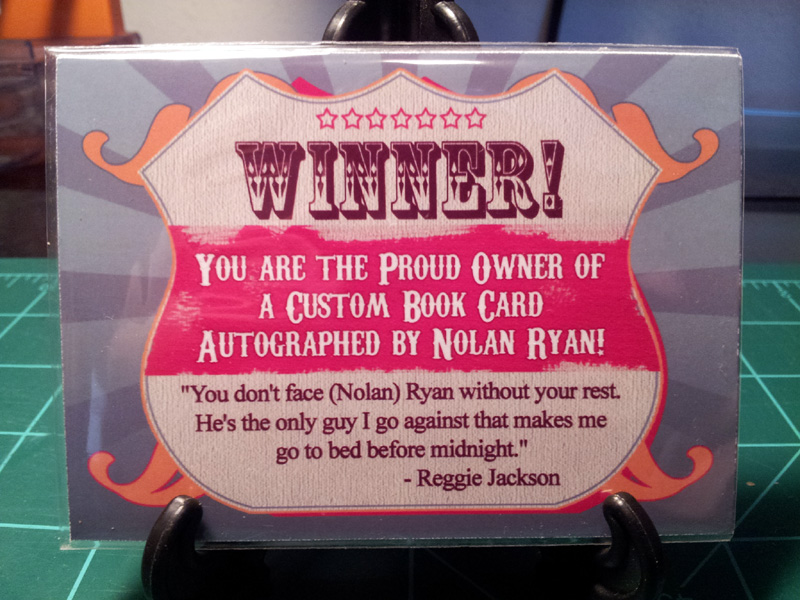 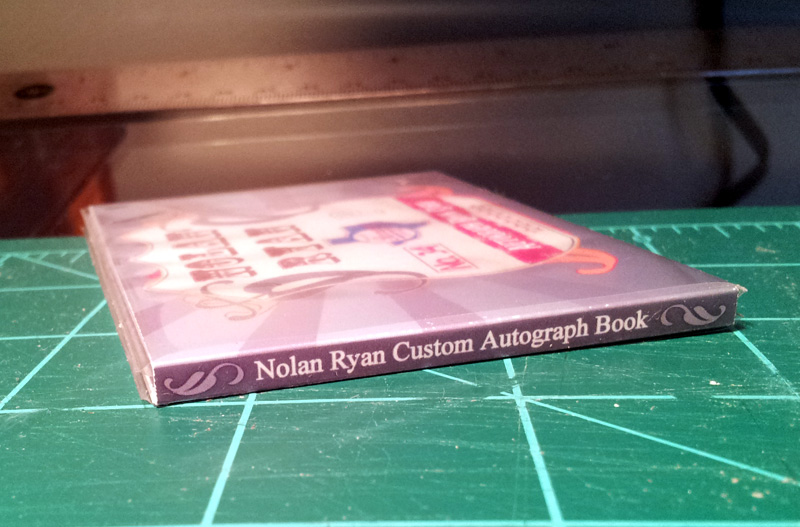 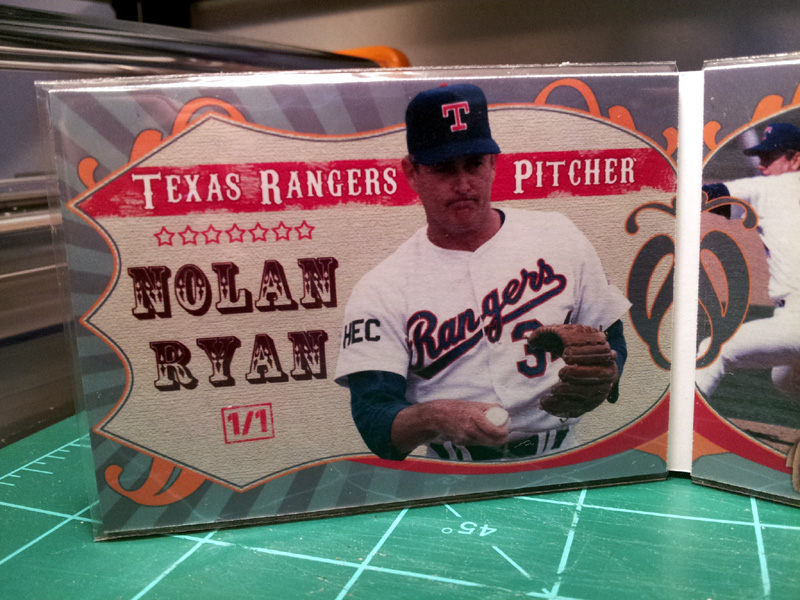 Inner right: The whole reason for this creation … BAM! 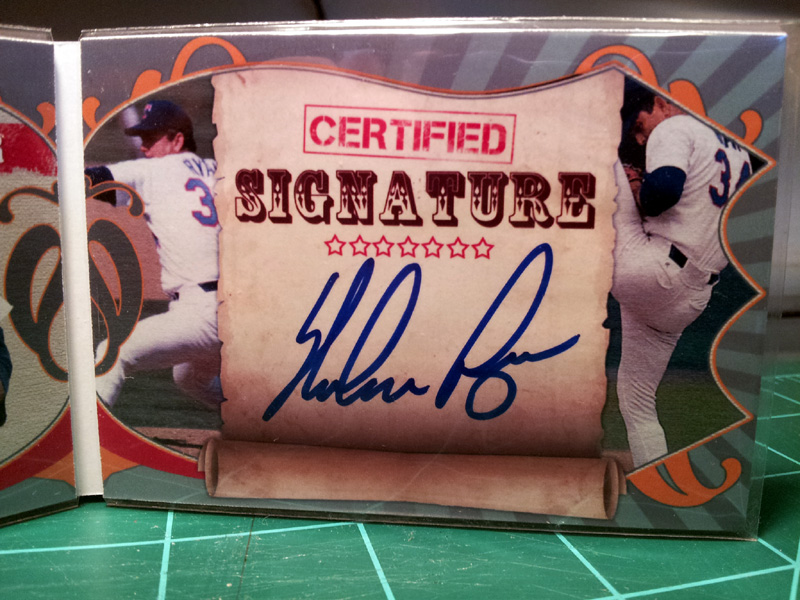 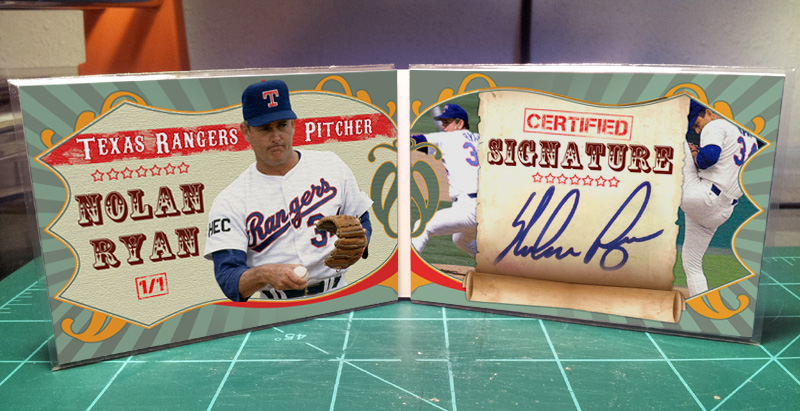 You may recall the pic on the right of him with the high leg kick. Topps used it for one of their cards a while
back… 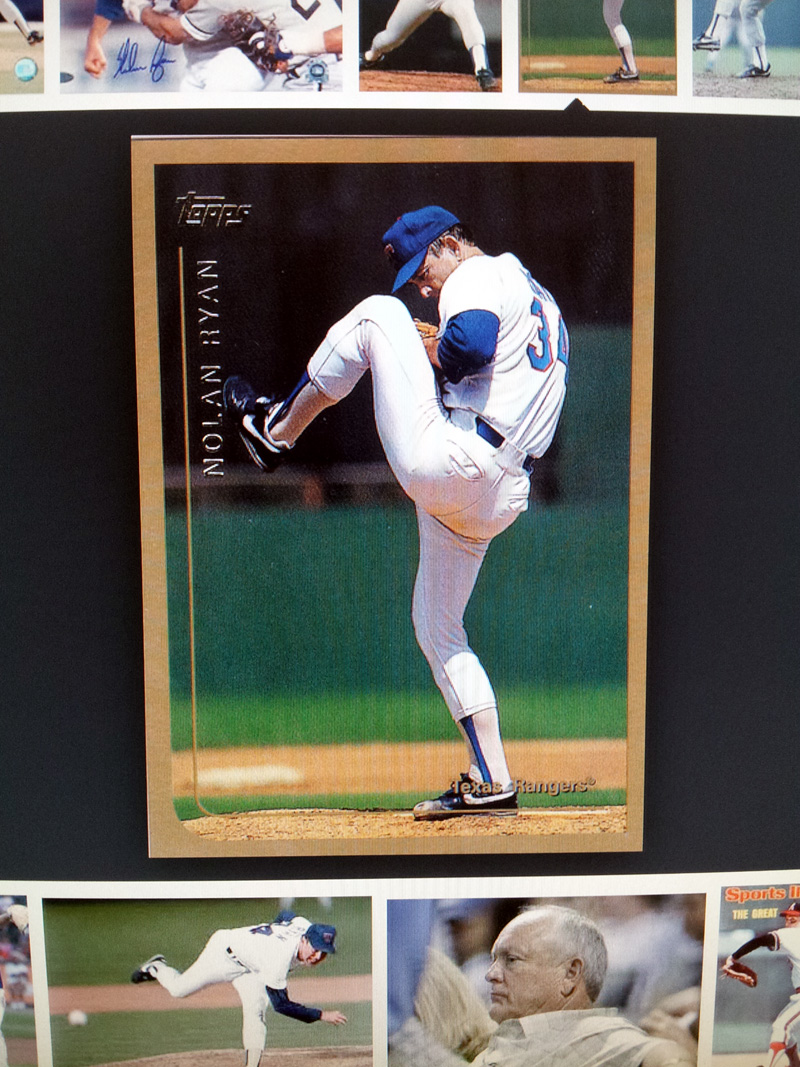 So, there it is – a summary of a fantastic night, with 3 cards that bring me joy that no pack pulled or ebay purchased Nolan Ryan card ever could! 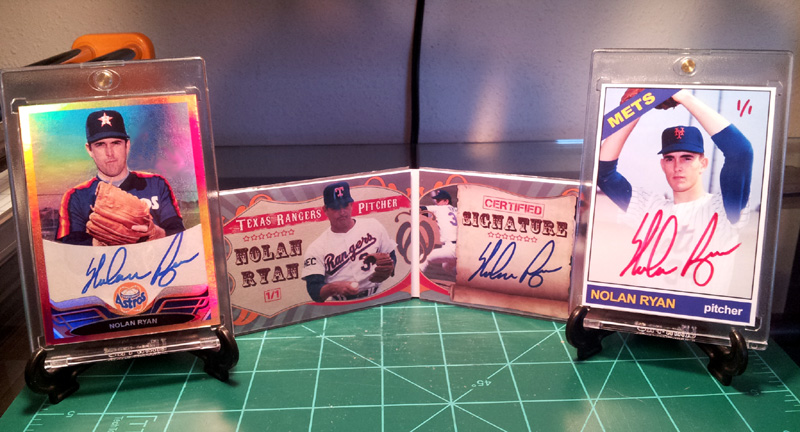