I just caught the TTM bug! (TTM is Through the Mail Autographs)

I remember the first time I tried to send out a baseball card through the mail to get it signed.  It was (of course) Jose Canseco.  My prized 1989 Fleer card was taken and wrapped in cellophane for protection (at the recommendation of my mom, I’m sure – I was 9 or 10 at the time and wouldn’t ever admit to such a thing!)

I began the long process of writing the letter, the address, the SASE and stuffing it all in an envelope.  Not to mention the gut wrenching task of spending 50 cents on 2 stamps which could have gone toward a pack of Topps, Fleer, Score or Donruss!
It felt like decades, but after probably only a few months, I got it back!  I opened the envelope and there it was … my 1989 Fleer Jose Canseco card signed …. ON THE CELLOPHANE!!!
I was happy the card came back, but was bummed out that it was on the cellophane.  It is funny to me to think that back then I wouldn’t have just tried again with a card sans the cello, but it never occurred to me.
Does anyone have a time machine?  If so, if I could borrow it and send like … 100 of those things to him.  Surely he won’t sign anymore free TTM.
Fast forward about 25 years later, the internet is all a buzz about getting autographs through the mail.  From your favorite baseball player to an actor you can’t get enough of.  There are several out there!  A free resource you can try is here:  http://www.sportscardforum.com/ttm.php
I have been meaning to try this myself … just throw a ton out there, and see what sticks.  I have started out with using some customs of Cespedes, Gray and Donaldson:

I hand write the letters and envelopes because that apparently is the best practice for TTM.  I have one huge thing going for me – my chicken scratch writing hasn’t changed much in the past 25 years – the players may think I’m a 10 year old … with very bad handwriting!

I started thinking to myself – WOW this is going to be a *ton* of work if I keep sending out customs like this!  So I decided to send some paper clippings.  This picture may not make sense … YET.  I will post an article later whenever show you what I have done with them.

The main challenge for me was this:  If I’m sending out a lot, I don’t want a lot of time spent in making custom cards, and I don’t want to get a huge picture that I can’t cut the auto out to put in a custom cut auto card that I can make.  That would be a bummer!  Don’t get me wrong – any type of autograph would be fantastic, but it would mean so much more if I could create a beautiful art piece – a custom pc card out of it.

SPEAKING OF WHICH – here is a sneak peek at what I’ve been up to: 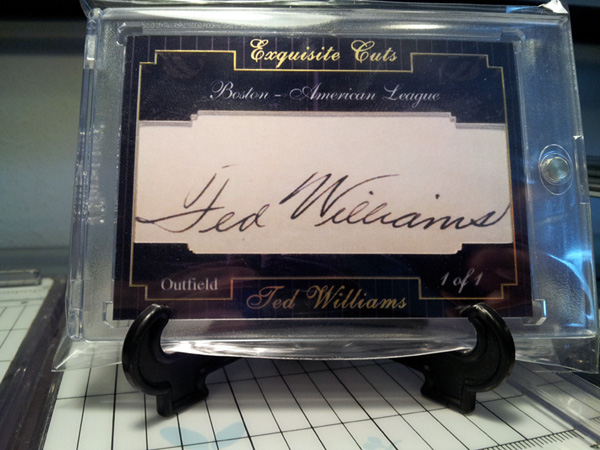 I’ve been trying to do a nice design with some cut autos. This is a nAuto … not-auto (get it? ha!) – I just printed the autograph out and created the design around it. I think it came out great.  It is a little scary at how good the signature looks though.

Okay, back on point.  Over the past few days, here are a few folks I’ve sent mail and email to in hopes of getting back an autograph:  Donaldson, Cespedes, Gray, Will Clark, George Bush, George W Bush, Gina Carano, Pat Sajak & Vanna White, Hugh Laurie, Nick Offerman and others.  I can’t wait to see what I come up with!

PLUS … I have a few things coming in the mail to me which I will be pretty excited to show once they get here.  One of which being an autograph that I am getting for free from an online forum member which I will reveal soon.

Okay, back to writing letters!