Today was a rather busy day. After church, I was to go to a card show, then to a dealer friend’s storage unit to pick up about 140,000 cards, and come back home to sell some card holders to someone coming from over an hour away.

Originally I was just planning on going to the storage unit, but another dealer friend alerted me on my blog to there being a show in town. I was going to say no as it was about 45 minutes away, but it turned out it was only 3 minutes down the road from the storage unit.

I got to the show and it was a very small one. Admission was $2, so I paid my dues and walked around to see some of the tables. I burned through the hour I had allotted myself there quickly. I ended up dropping five big ones for these guys: 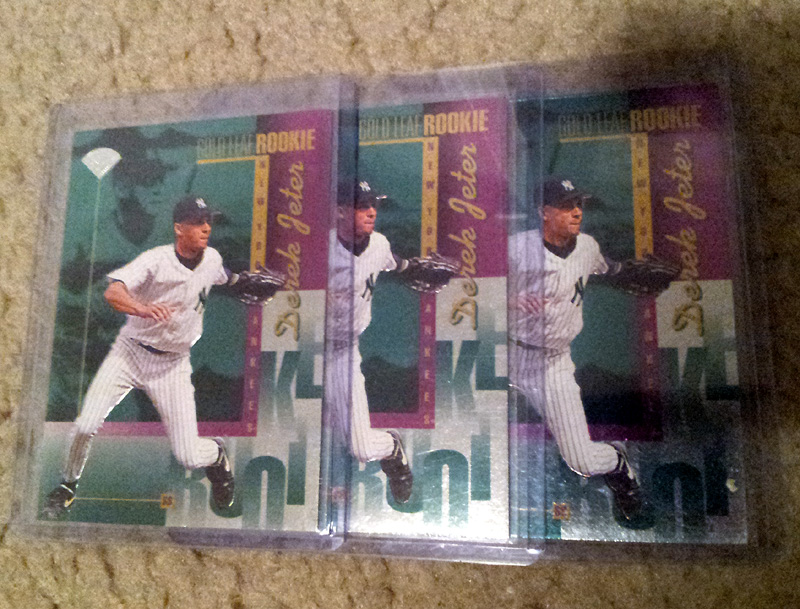 Nothing too crazy, but probably about $25 in sell value here. I mainly got them because they are all very nice looking cards. Some nice eye candy for my desk while I wait to flip them. I also sold the Maury Wills bat card.

This doesn’t have anything to do with the flip, but I might as well finish the story. I can see you now biting your nails “What is going to happen with the 140,000 cards? What about the dude with the holders??? THE SUSPENSE!!!!”

I picked up the cards and threw them in the cardboardmobile (my gold minivan that is now pushing 153,000 miles). 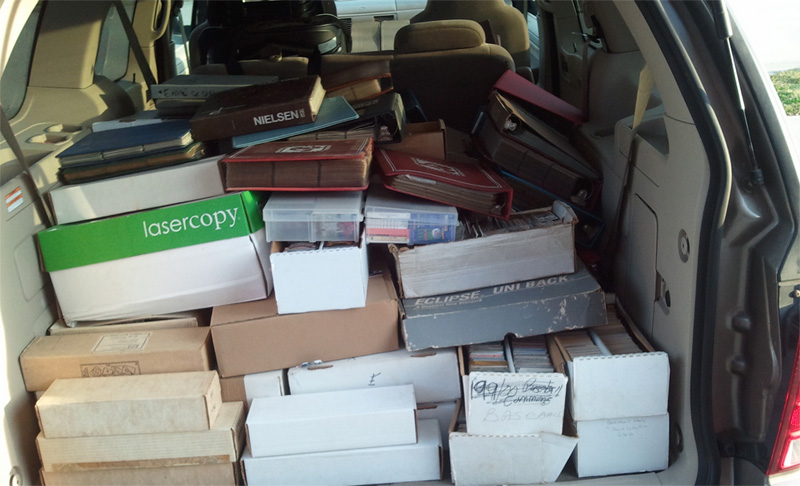 Knowing that I was supposed to meet someone, I called them when I had just finished loading up the cards to let them know they can begin making their 1 1/2 hour trek to my neck of the woods to grab my excess card holders I had for sale. Then it hit me … why don’t I ask if they want to buy the cards I just got?

So as I was just getting on the street, I pitched it to him. I told him my minivan was packed with sports cards and asked if he wanted them. He said he probably wouldn’t because of price, and I said no worries – see ya in a bit!

Immediately, he called back and said “my wife says I should get these so I will!”

This is quite possibly the quickest flip away from a card show ever!

I met them at the corner gas station, and they pulled up in an Impala … with THREE people inside. GREEAAAATTTT … looks like this isn’t going to happen. He asked if I thought they would fit, and I responded “where there is a will, there is a way.”

Throw in my standard “time to put our tetris skills to use” comment and we were off.

Amazingly enough, it all fit!

I was thankful for this sell too, because when I had come home, my wife and son were in the front yard and garage trying to shoehorn / clean so we could get the new cards, yesterday’s garage sale pickups and her sister’s stuff that was just brought over.

All in all, it was a great day (even though our pappa john’s pizza coupon didn’t pan out *grumble*) That’s okay, there is always tomorrow! Speaking of which, a friend is coming in the morning to bring over a nice little lot I’ll likely purchase off of him, so we’ll have even more goodies for this flip quest!

So, here is where we are at!

Keepers (for now)
2013 TTT Cespedes GUx3 Auto
Fabric of the Game Canseco Jersey
Absolute Heroes Canseco Jersey / Cap
2 Security Cameras
6 plates (wife let me know that we will be keeping 5 of the plates!)