So, the last few days have been very, very exhausting and frustrating.  I have been trying out many different methods to get the desired look *just right* for my newest customs.

Before I go any further, I’m going to remind you who is writing this.  Me.  The crazy dude who collects that one dude who had a ball hit off his head and go into the stands for a homer.  The guy who put the spotlight on the whole steroids thang, and hurt the generation of ballplayers I grew up watching of going into the hall of fame.  Well hey, they were the ones that took it, so maybe they hurt themselves, but I digress.

The one and only, Jose Canseco … or as my friends as a child would call him, Jose Can-strike-out.  (Still stings!)  I had hesitated about making a blog posting on this, and just waiting until I get some Bryce Harper, Mike Trout, Yasiel Puig, Frank Thomas or Ken Griffey Jr.

I PROMISE that day will come – I’m gonna push out some frickin’ cool stuff of the big boys, but right now, I’m still testing things and cranking it out for my personal collection.

Earlier today, I came downstairs for lunch with my family.  I just remembered my team, the A’s were on – so I fired up the project, ran to the laptop and watched from the kitchen.

This isn’t THE game I was watching tv, but it shows the projector …. 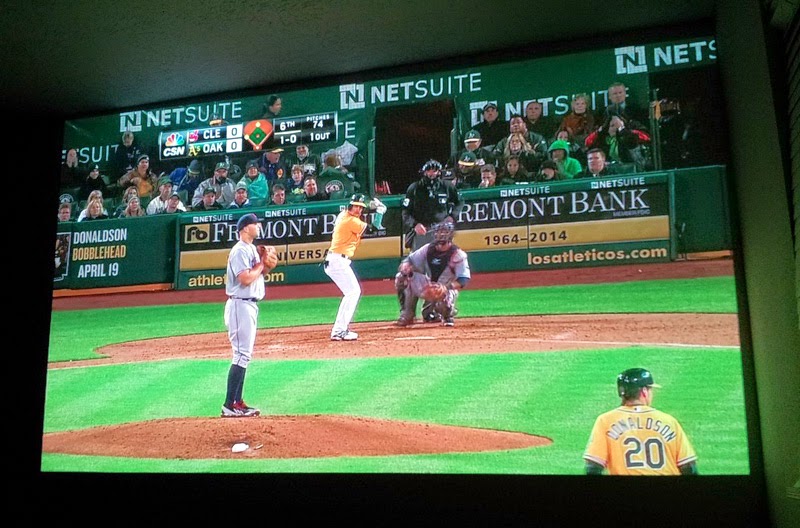 My wife balked at the idea of us swiveling our 50’s style diner bench and have us all sit on one side so we can better view the game from the kitchen (What!?!  It meshes the classic eat meals at the table as a family, and now generation’s addiction to watching tv while eating – best of both worlds!).  So I watched with my head cranked left until I finished, then I went into the living room. 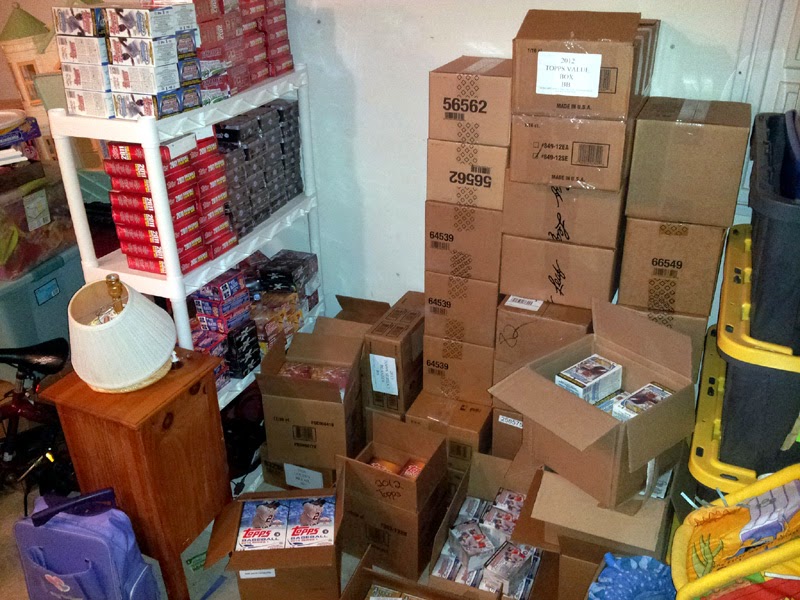 I decided on a few chrome blasters. 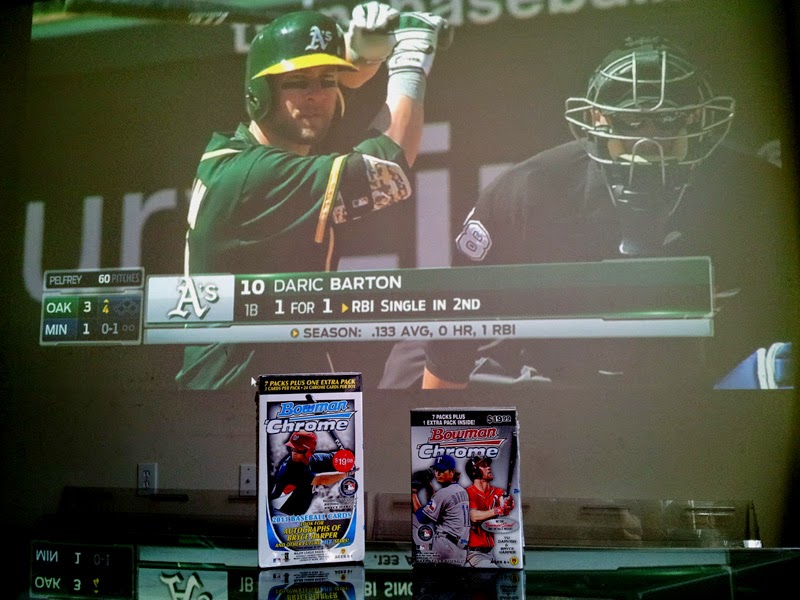 Hmmmm… that doesn’t quite show how big this projector is throwing the image.  Let’s try this again … 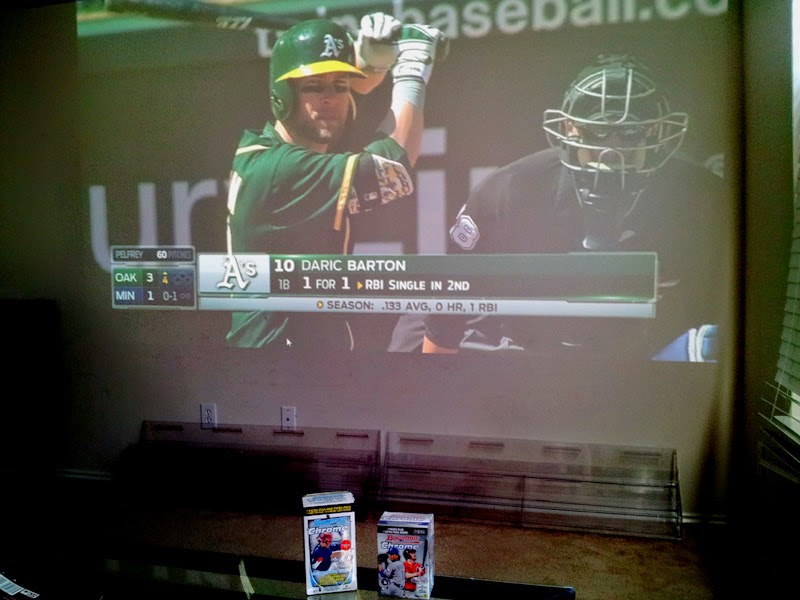 Meh, I tried.  It is a good 142 inches or something like that on my wall . Great picture … not bad for an $800 projector that uses a pringles can as a speaker! 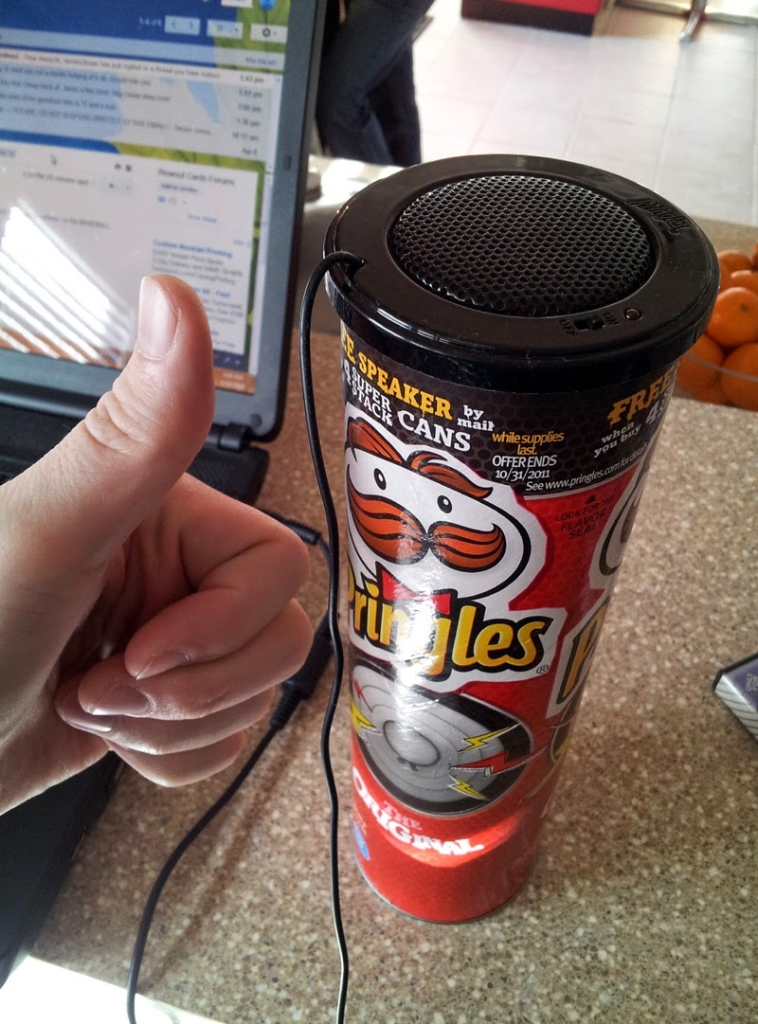 I decided to call my family in to have a little pack wars action.  Well, something like pack wars.  No matter who wins, the cards are mine, mine, mine … ALL MINE!!!  BWAHAHAHAHAAH!

I distributed the packs evenly, and we came up with some cool stuff!  Nothing too crazy…. 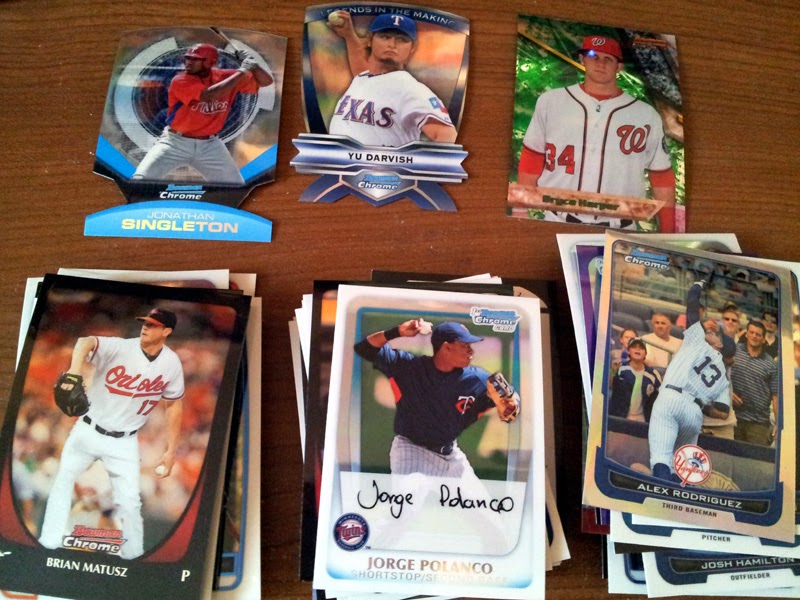 Then I got to thinking how cool would it be if I opened these cards, and found some Canseco? 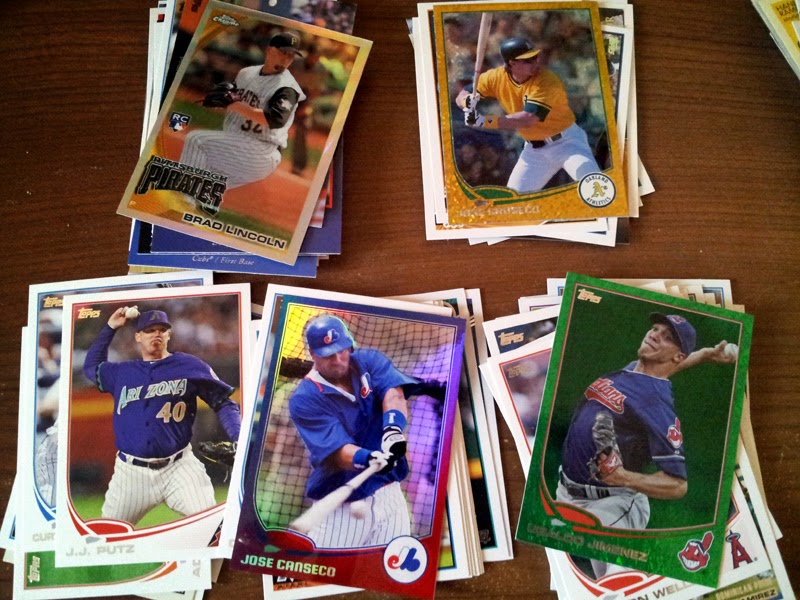 Of course, that didn’t happen, but it really put more fire under me to finish a few projects I’ve been working on.  I’ve been to stores, searched online, tried tons … TONS of techniques, and I finally got it!

Ladies and gentlemen … the atomic refractor 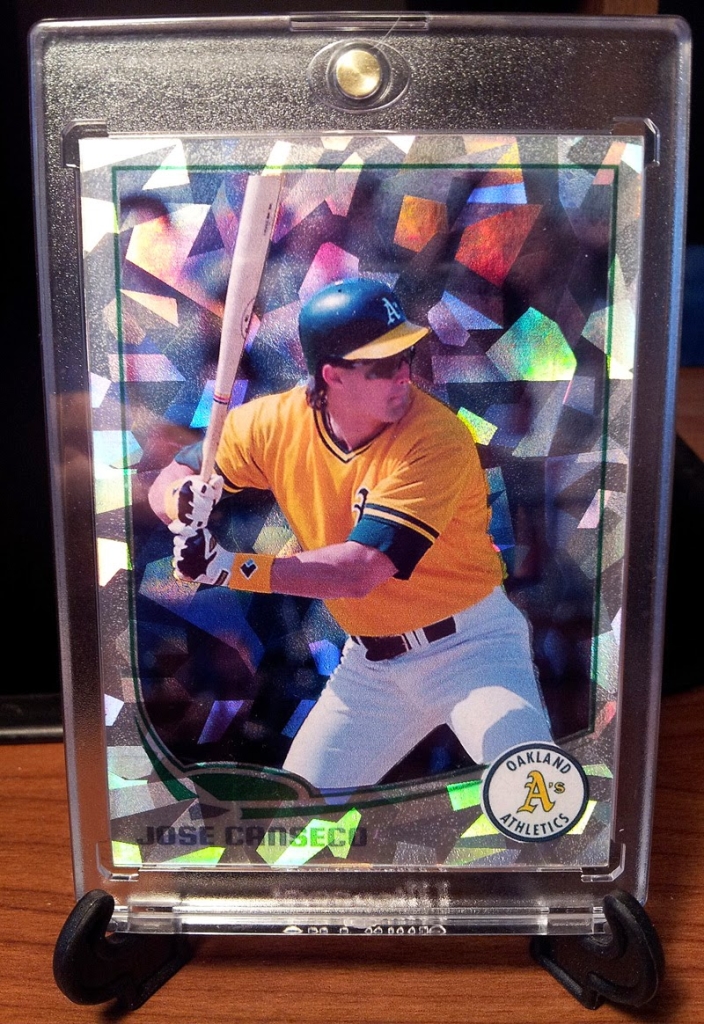 and the blue cracked ice version! 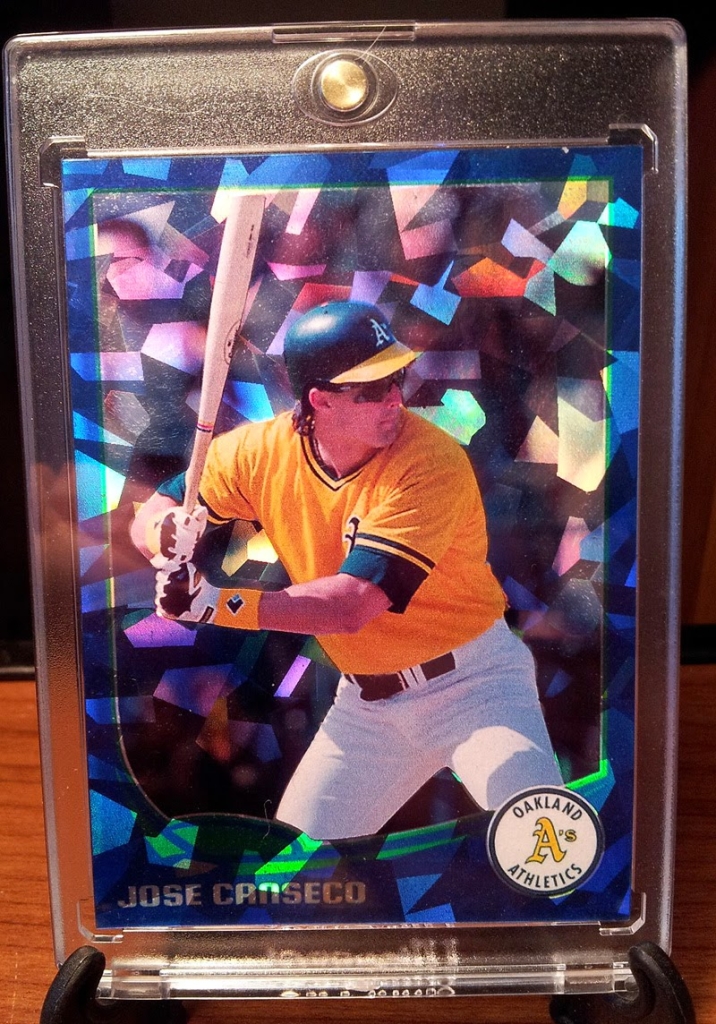 And last but not least, the canary refractor! 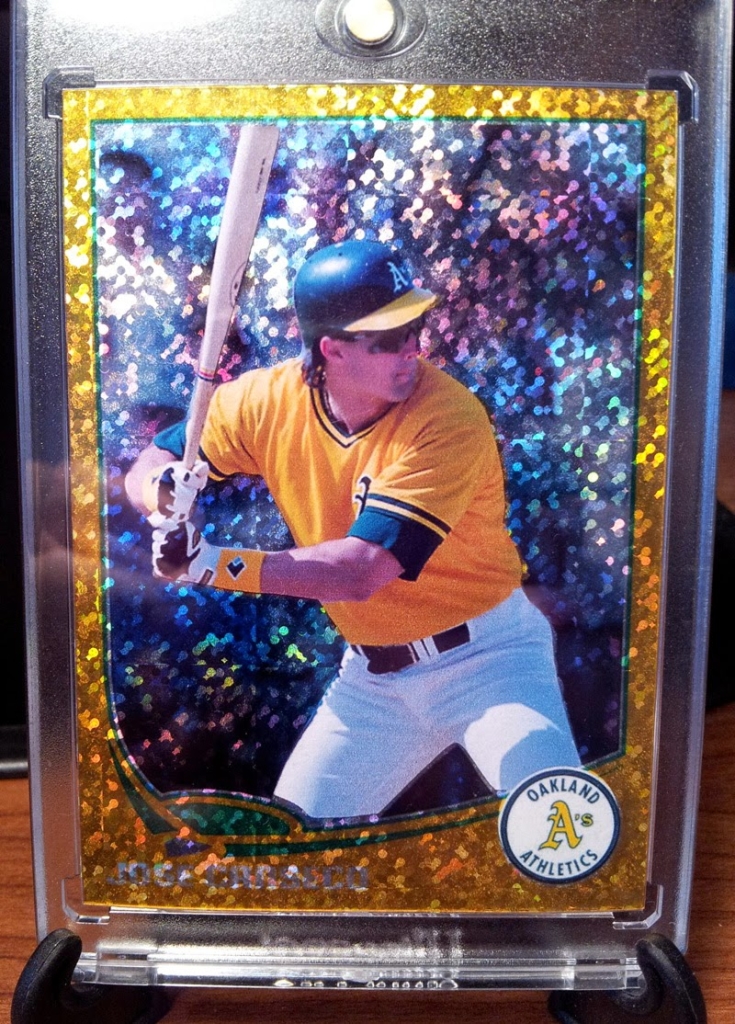 I’m very happy with how these came out.  It all stemmed from my canary idea, because I thought Canseco’s gold jersey would go awesome with the canary.
I didn’t stop there though … I did a few different Expos cards, just to show you I’m not just an A’s Canseco fan!
Here is a blue/purple/red bordered refractor (I called this a multifractor in a previous post … I think I may change the name to a berryfractor though).
Behold … the berryfractor! 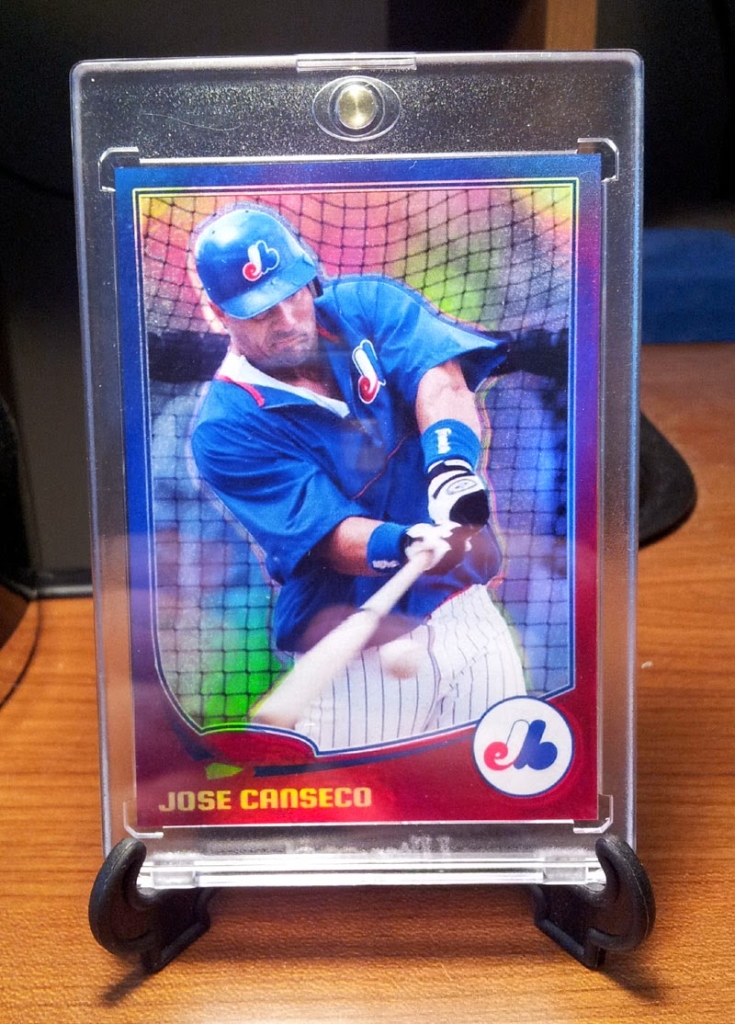 And the cracked ice berryfractor! 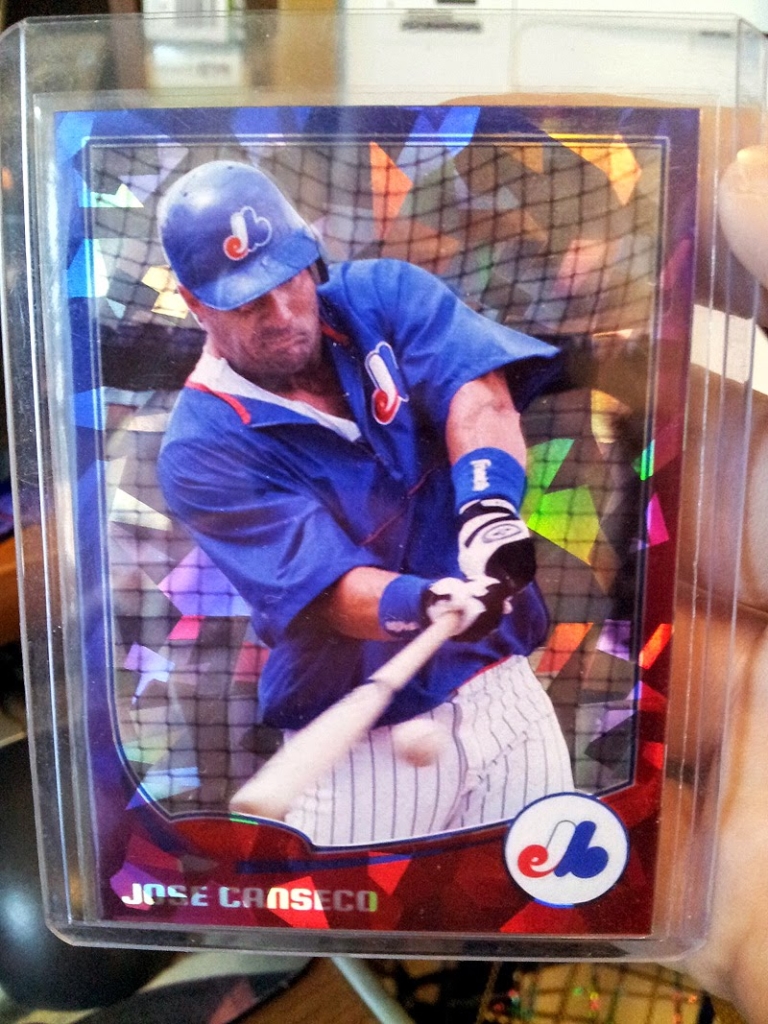 Finally, the multi berry canary cracked iced frac….ehhh … you get the idea …. 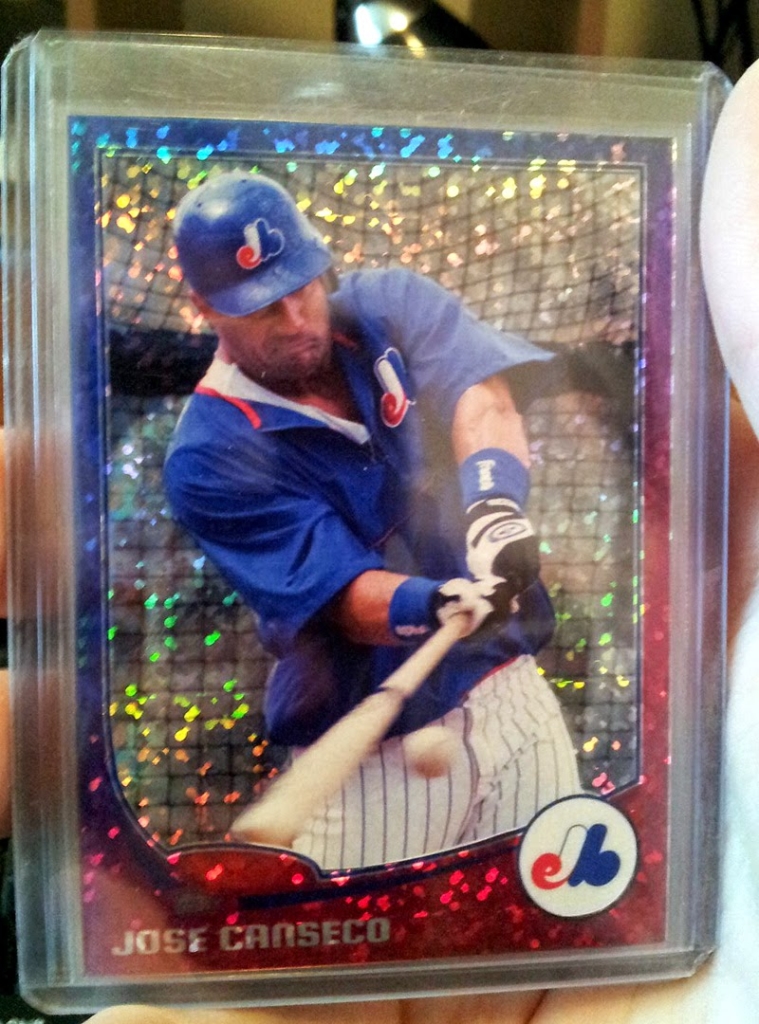 To show you how much of a cheapskate … NO … financially responsible person I am …. remember these? 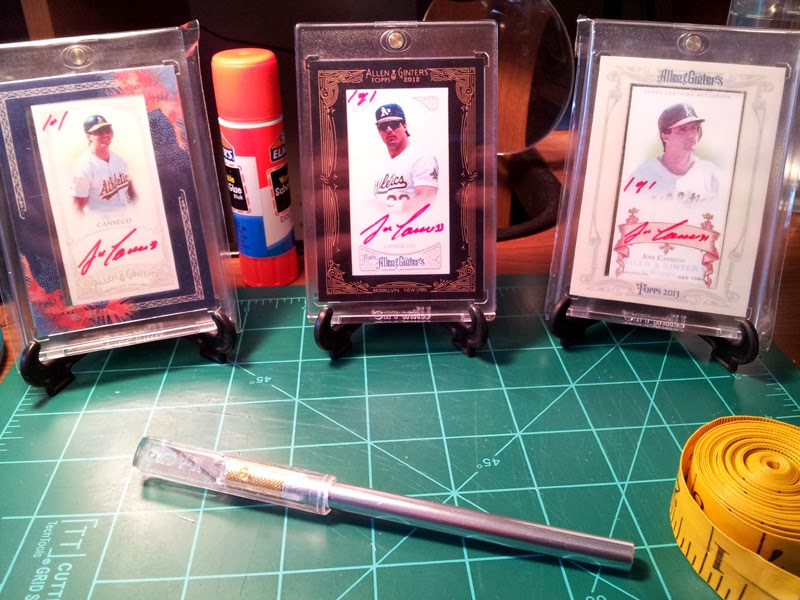 My babies … the three 1 of 1 red ink mini autographed Cansecos (Canseco himself autographed AND personalized them “1 of 1” for me a few months back).
Well, I absolutely love the magnetic one touch holders … but I only have a few, so for staging purposes, I took my 1 of 1’s out to show my Expos Cansecos in one pic.  Here you go: 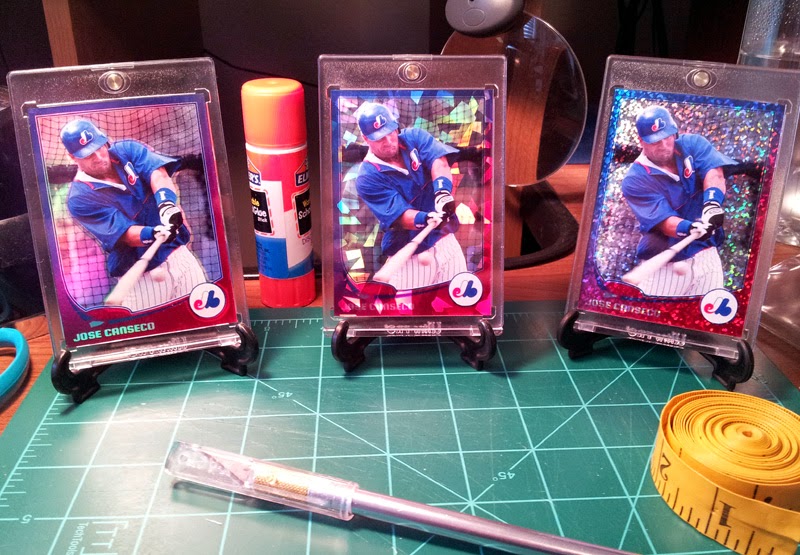 So yeah, that is my story, and I’m sticking to it.  I had a blast with these, and with showing them on the blog as well.  My head is bursting with ideas for my next project(s)!  Thanks for sticking around to read this whole thing.  ‘Til next time, Seacrest OUT!