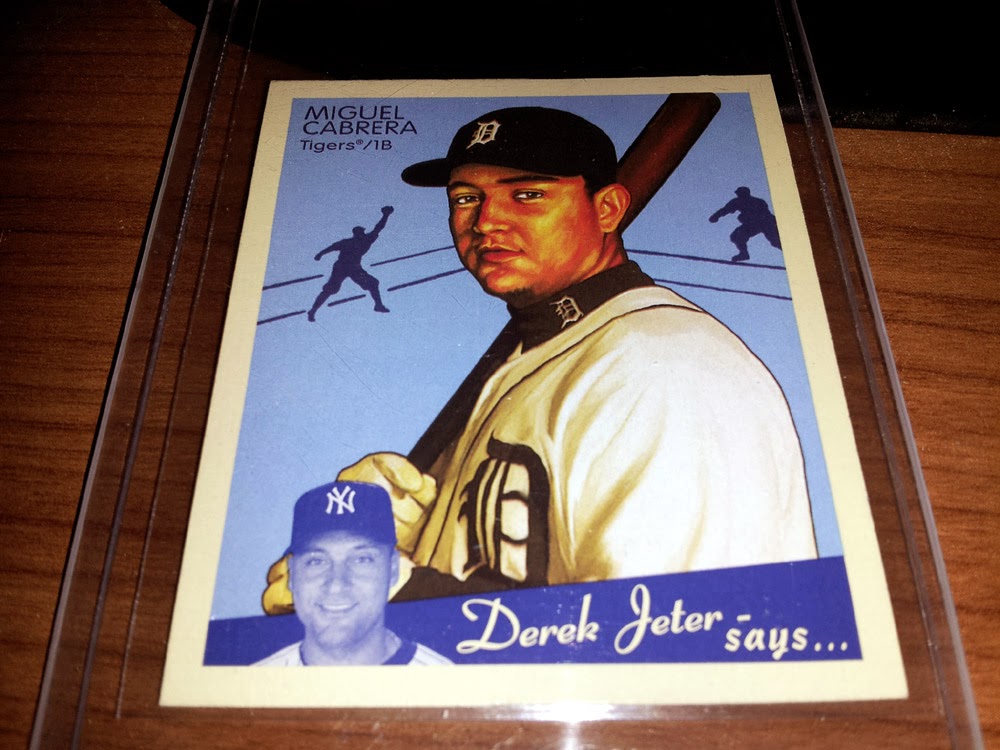 Ah yes, Goudey.  First introduced in the 1930’s with spokesperson Lou Gehrig at the bottom.  Throughout the years, many people have tried to remake them, and finally, in the late 2000’s, Upper Deck did, and got it right.  They added two flavors:  1 with Jeter on the front, and 1 with Griffey on the front.  The packs contained potential minis, green backs, black backs, red backs, blue backs, and a host of inserts.

The back has some cool little silhouettes (yes, I can spell that right … finally!) of players playing baseball.  They vary in action shots from card to card.

Truly a cool card design!  I love the throwback look.  I have a little over a case of it here, and every now and then I will open up a pack or two.  Last night, my wife and I were in my office, enjoying a few packs.  When I put them down, I had an idea …

Why not make a Canseco 2008 Goudey?  I love the design!  I can also put whomever I want on the front!  My wife said “Hey, you know what would be cool?  What if you put your face on the bottom?”

Well, that started a several hour long marathon split up over the next few days.  I couldn’t get the thought of having a Canseco ’08 Goudey mini, and my mug on the front instead of whomever they have on it now … Jeter, is it?  😉

All I had was a few pictures of family portraits we have taken a few months ago.  My wife had the great idea of wearing jerseys for a few outtakes, and holding bats during the session, because I am such a baseball nut. 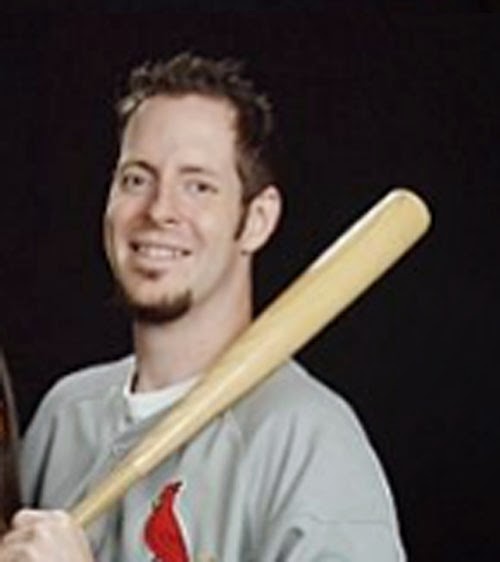 It is a bit grainy, but it doesn’t need to be that big.  Gosh, I really wanted to wear a hat, and where is my A’s jersey?  Oh well, let’s figure this puppy out.

AHA!  Brad Pitt!  In an A’s hat!  We look similar, right?  More importantly, I think I can snag his hat. 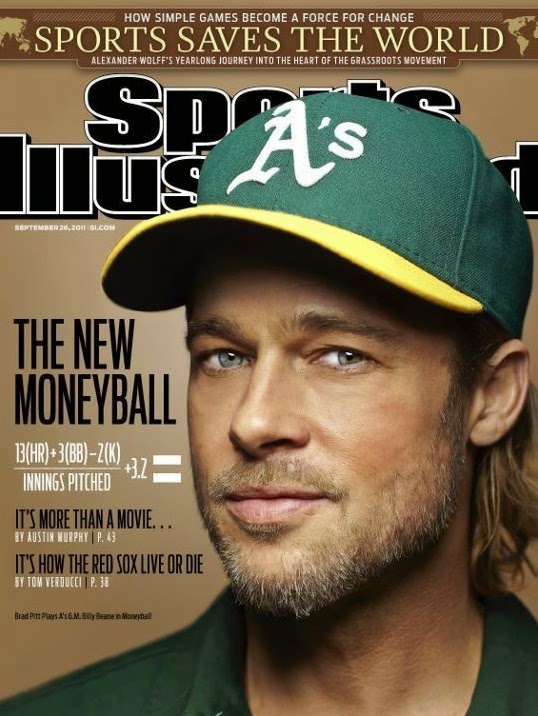 Now, halfway through the design, as I was messing with the silhouettes (me: 2, spelling: 0) I had a hilarious idea.  I thought it was hilarious, anyway.  It gave me the best laugh of the day.

Here are some of the silhouettes (3-0) in Miggy’s card:

Look what fun they were having!

But I really, realllllly thought I could do better. 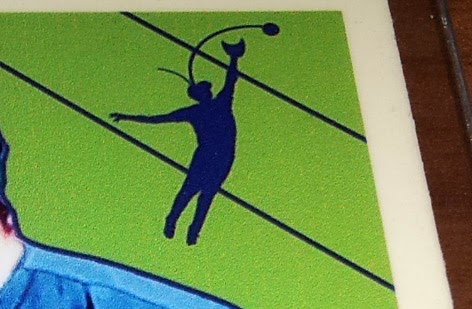 For those of you who don’t remember, let me refresh your memory … 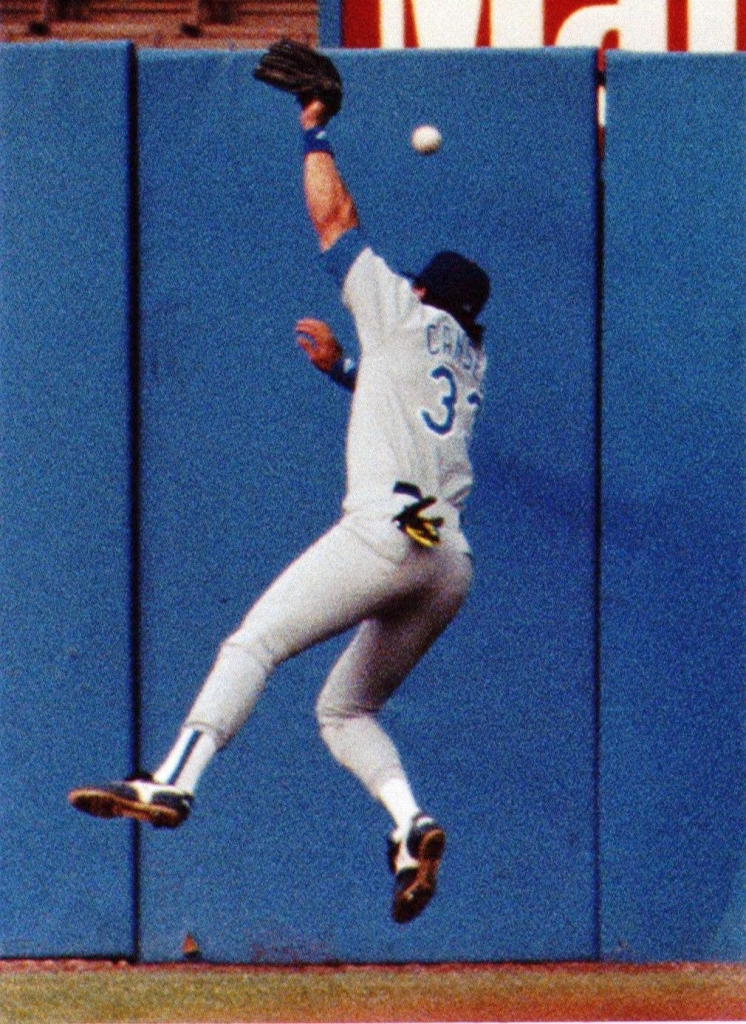 Poor, poor Jose.  I loathe watching those “Baseball’s 100 goofiest plays” countdown shows – #1 is always, ALWAYS my main man having the ball bounce off his head, over the fence for a home run.

But hey, it happened, right?  Might as well have some fun with it!

After TONS of trial and error to get the card right … 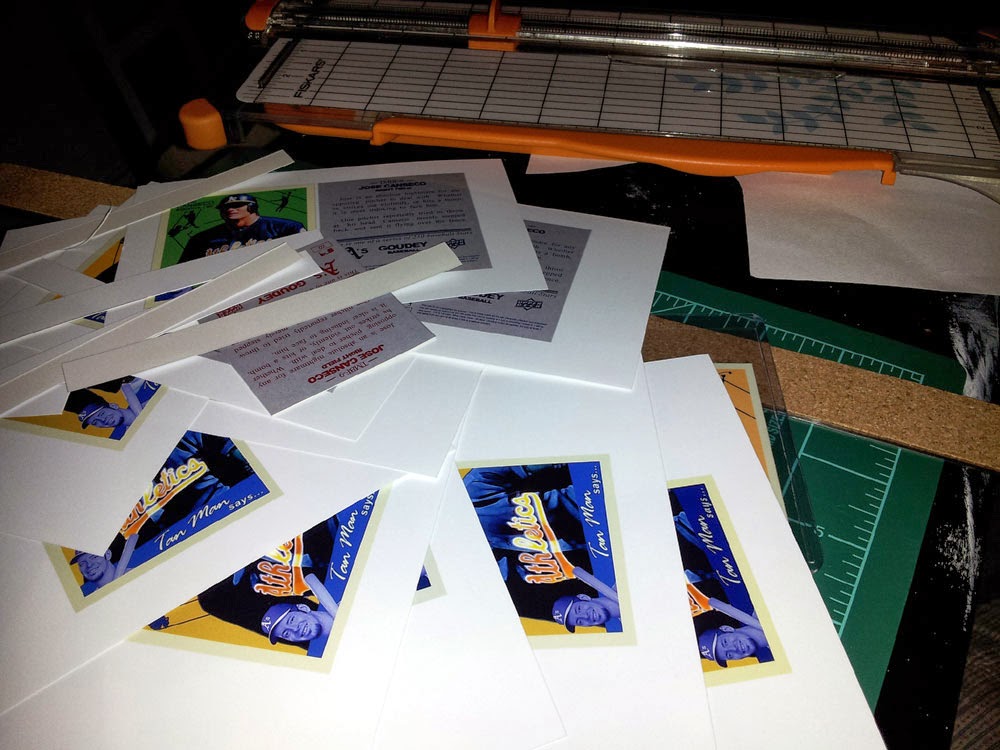 …and a nice Fro-Yo lunch, thanks to a discount courtesy of the Houston Rockets winning last night… 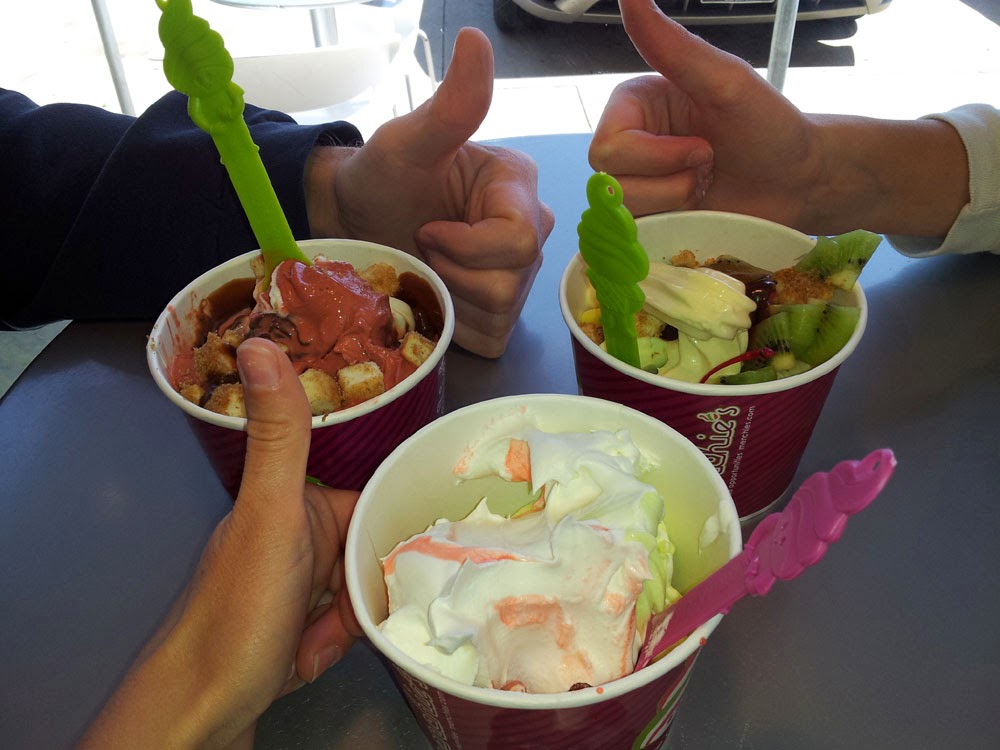 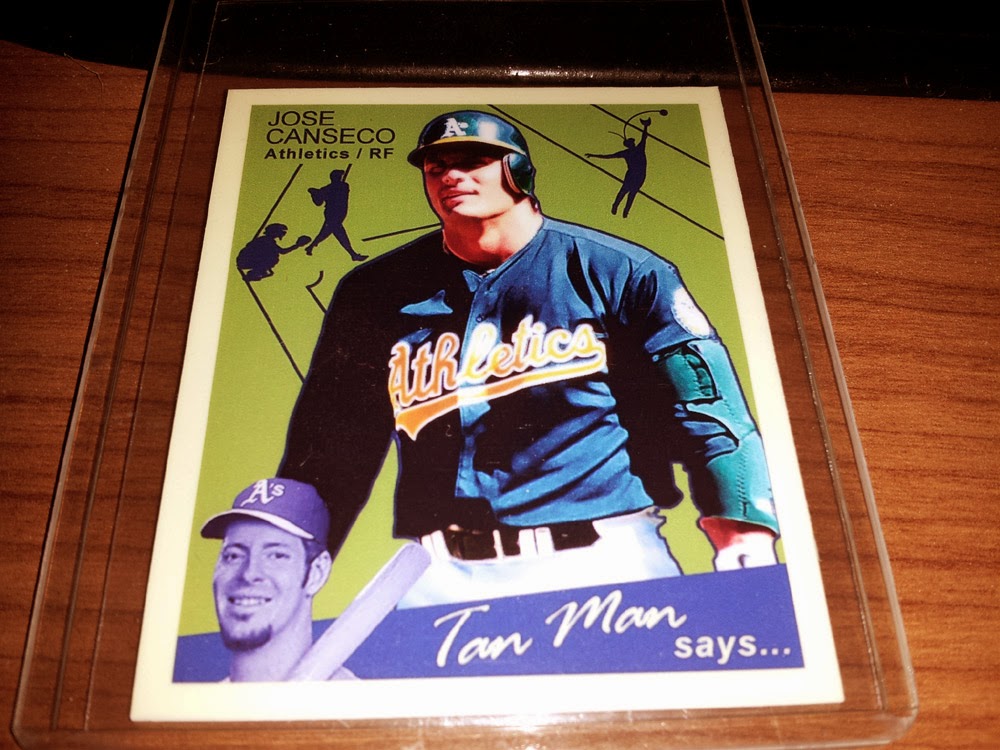 Here it is when compared with a real ’08 Goudey mini: 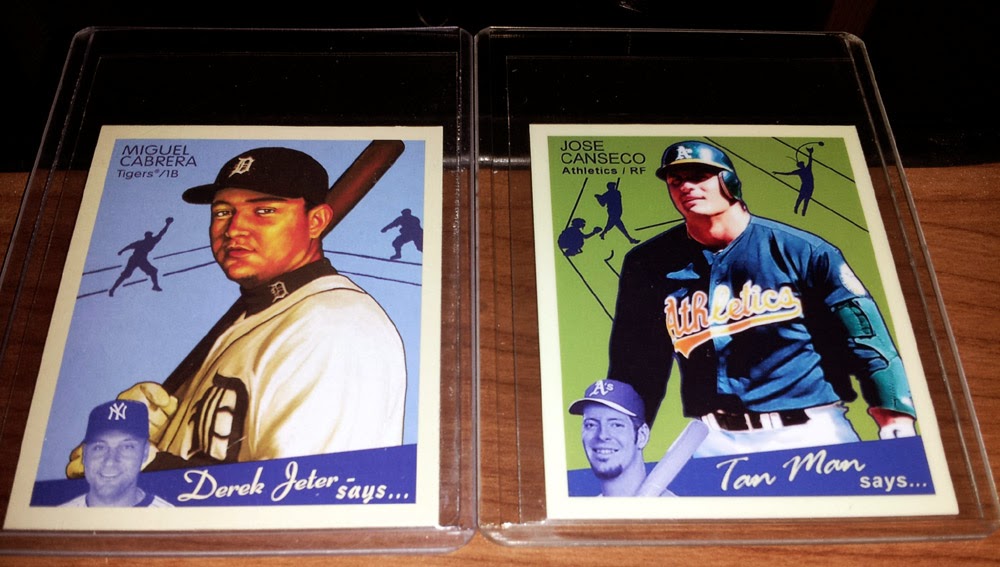 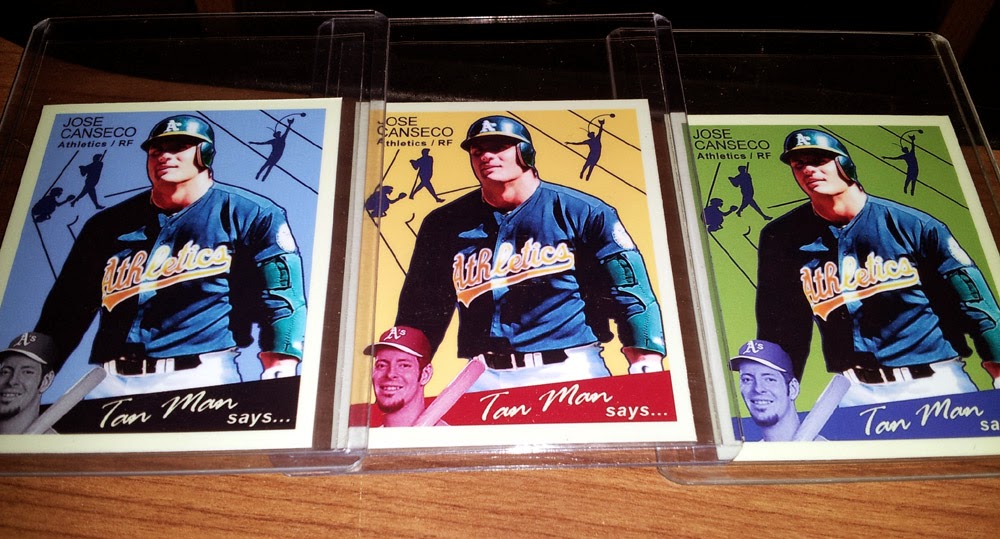 Black, red and blue variations!  Here is what the backs look like: 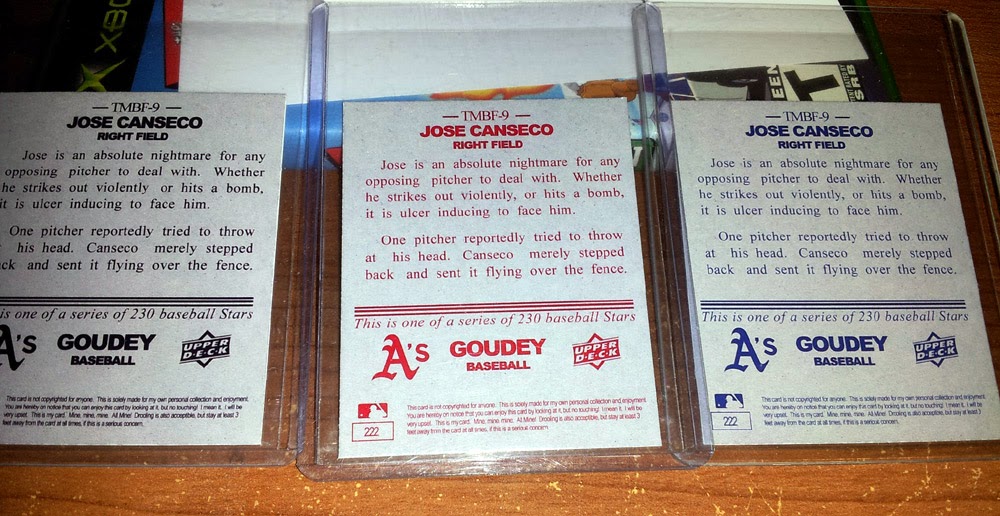 The bottom says “The card is not copyrighted for anyone.  This is solely made for my own personal collection and enjoyment.  You are hereby on notice that you can enjoy this card by looking at it, but not touching!  I mean it.  I will be very upset.  This is my card.  Mine, mine, mine.  All Mine!  Drooling is also acceptable, but stay at least 3 feet away from the card at all times, if this is a serious concern.”

Call it too much time on my hands, or call it not being a good manager of time, as always, I became obsessed over this idea of finishing it up, and sharing my journey with you fine folks.  Hope you enjoyed the read!