A VERY good week for my Personal Collection

I have posted a few times this week about some custom cards for my pc (Canseco). I was really bitten by the custom card bug hard. Mainly because Canseco prematurely ended his career, and I wished that the card companies would make more legends cards of him. Since that didn’t happen, I decided to step in 🙂

Soooo … I pulled out the big guns … 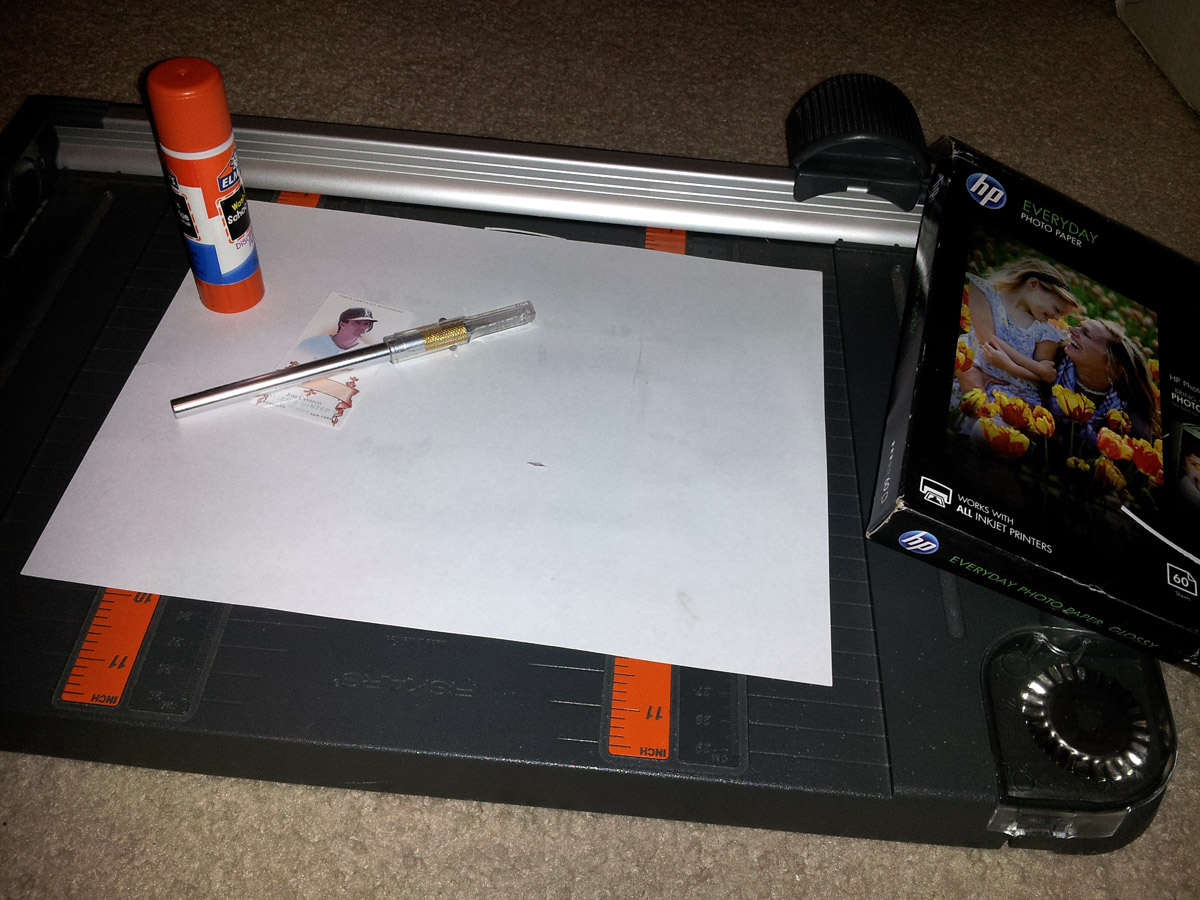 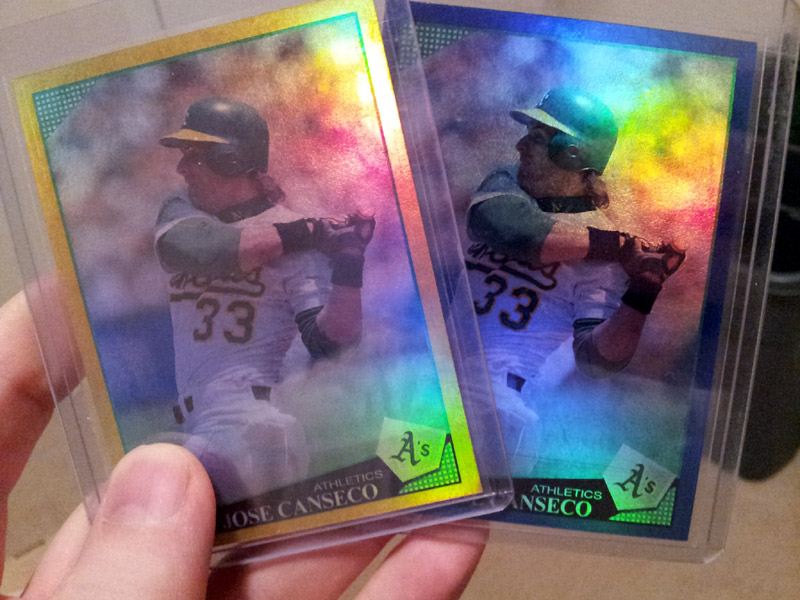 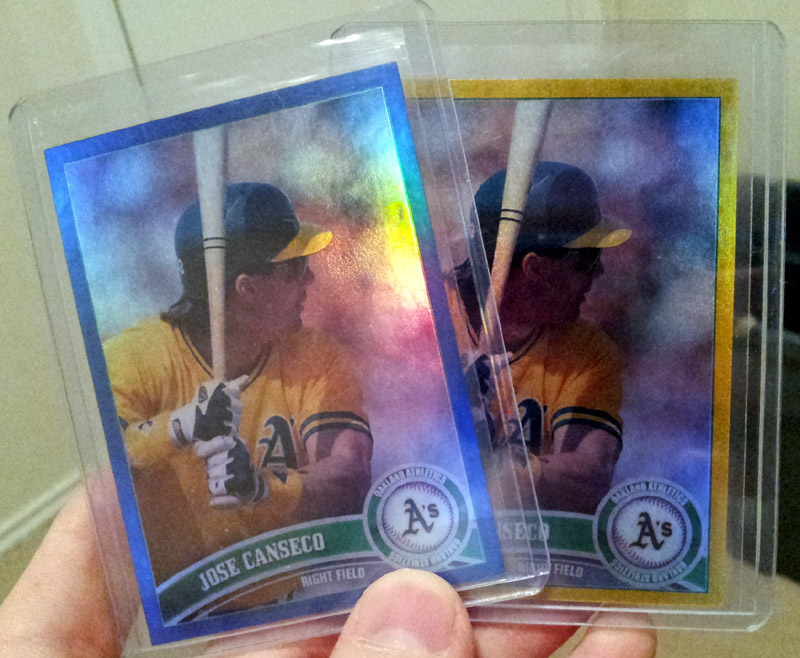 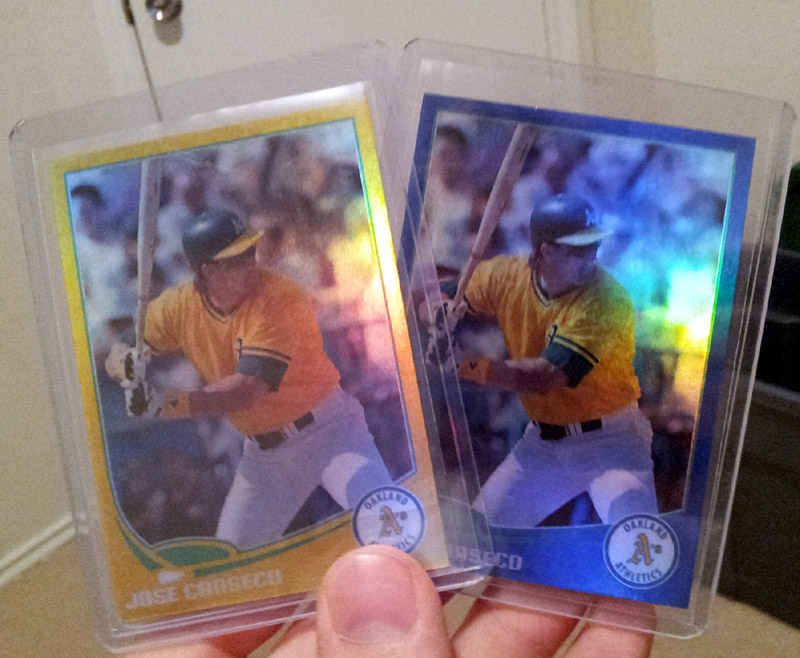 While were at it, I was thinking why not a superfractor? 1 of 1, baby! 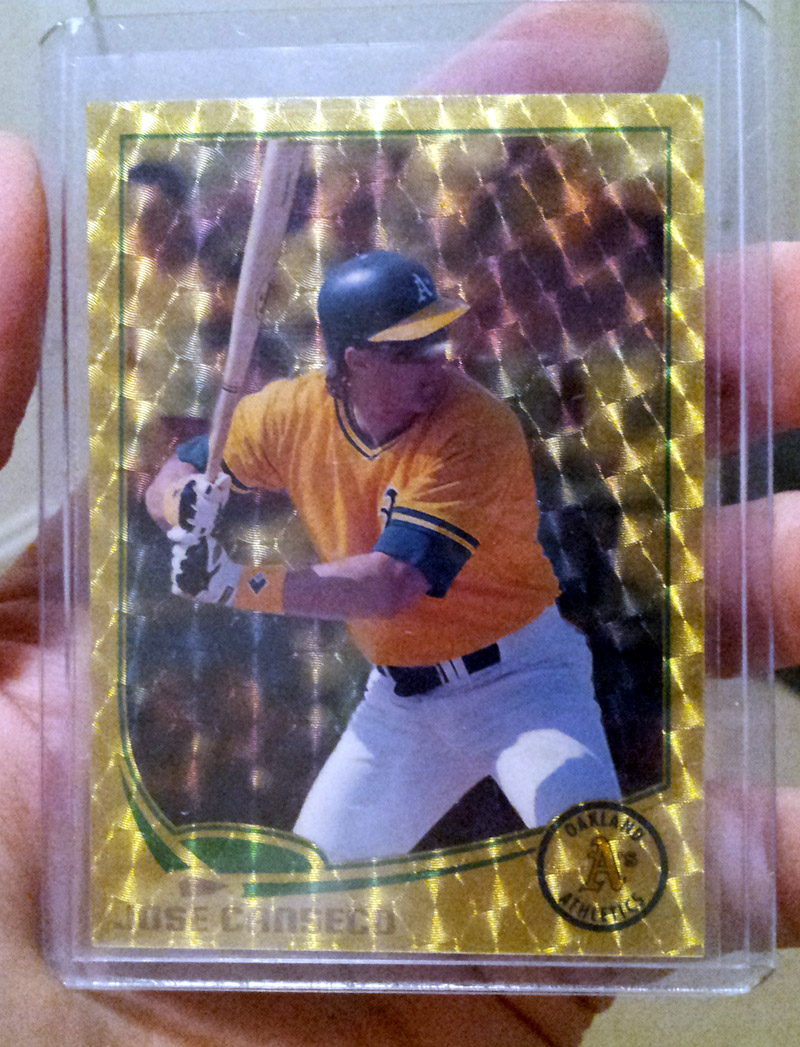 And what the heck, why not an actual custom INVISIFRACTOR – that’s right, folks. You saw it here first! 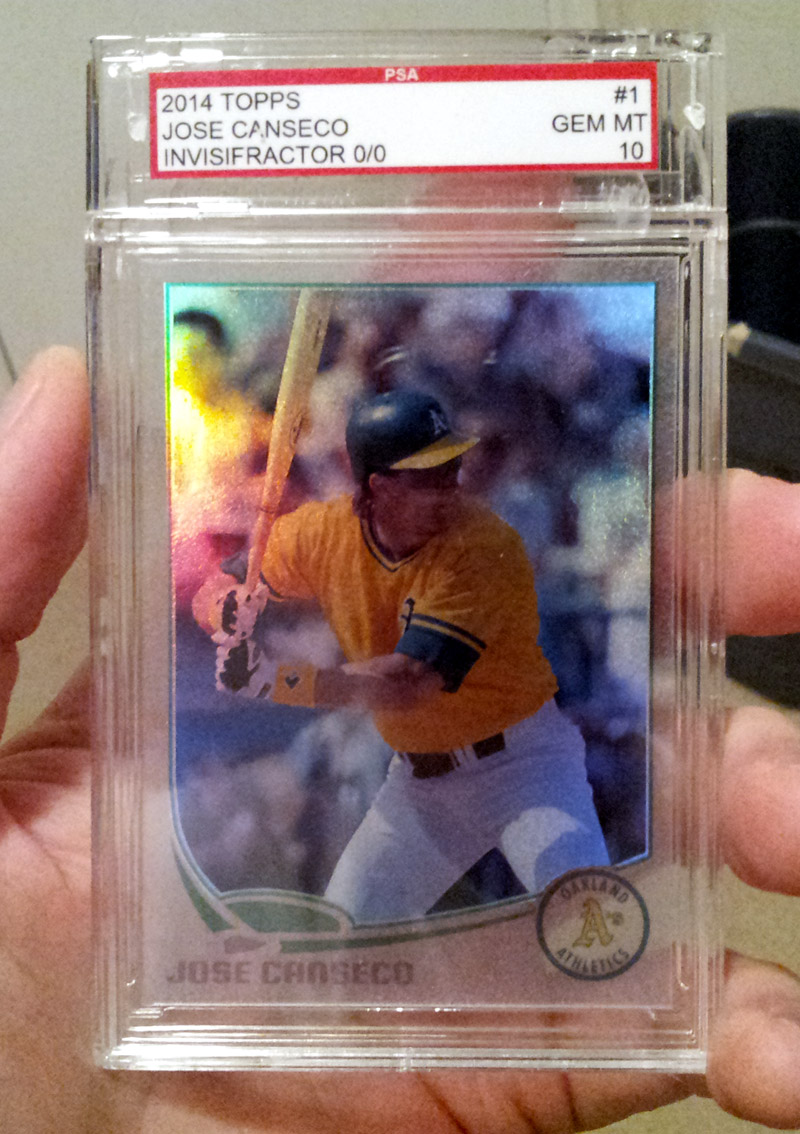 The back reads: “Congratulations! You have just received an invisifractor baseball cards of Jose Canseco.” (It is stamped #0/0). “Enjoy your beautiful new card. It is a shame that you are the only one who can see it!” Then at the bottom it says “The invisifractor: known by all. Seen by none.”

My son helped me with the wording, so I’m very happy to have had him in the mix. I made the cards all to have a logo look like Topps, but have it say “tanmanbaseballfan.com” 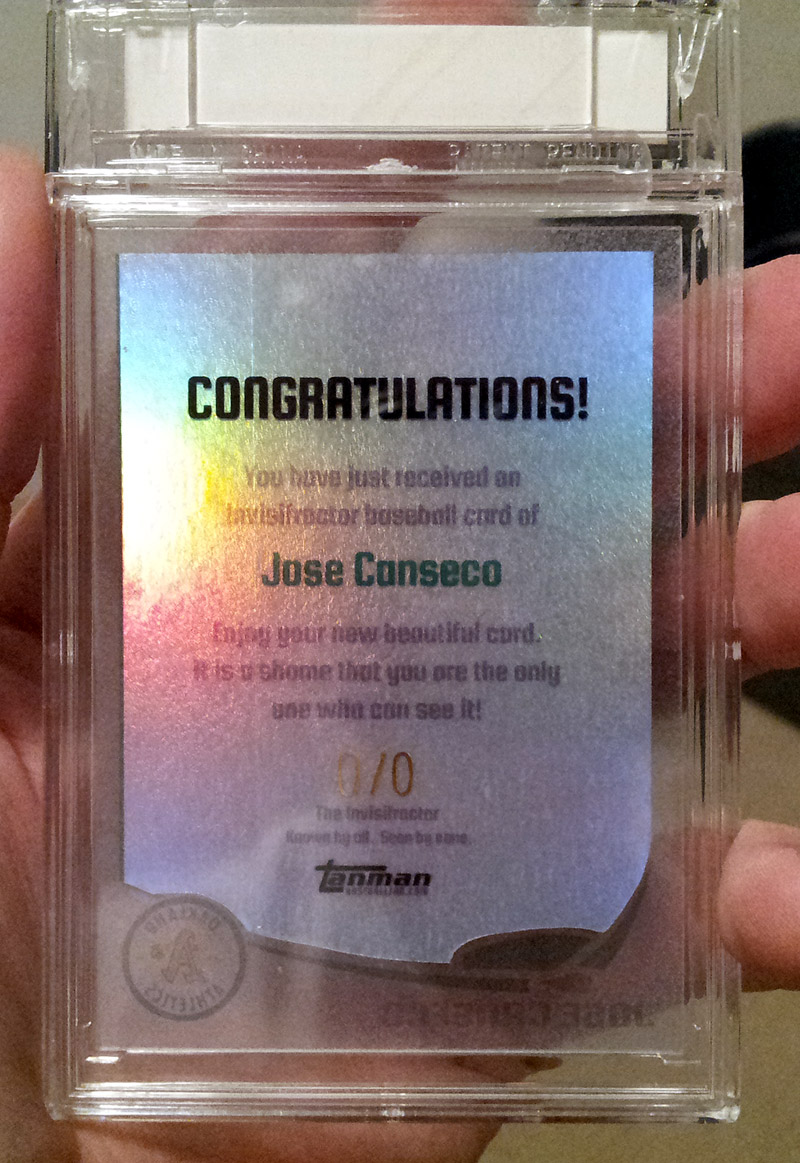 If you don’t know what the invisfractor is, check out more here . It is fantastic stuff.

Sumrtop gave me a surprise by doing the psa holder – that was a great addition!

If you look closely enough to these designs and know what to look for, you will see a blurred picture of me and Jose together in the background of each card.

Shortly before this flurry of Canseco-ey goodness, I found out Jose was going to be in town to sign autographs. (YEAH!!!) So I decided to design a card with an autograph window. Then another. Then another.

Trying to forget what all this was going to cost and remember this is like the ultimate PC opportunity, I went all out. I designed the cards, had them put together and rushhhhed to me next day air.

After scouring the internet, I went to the store and found my answers: 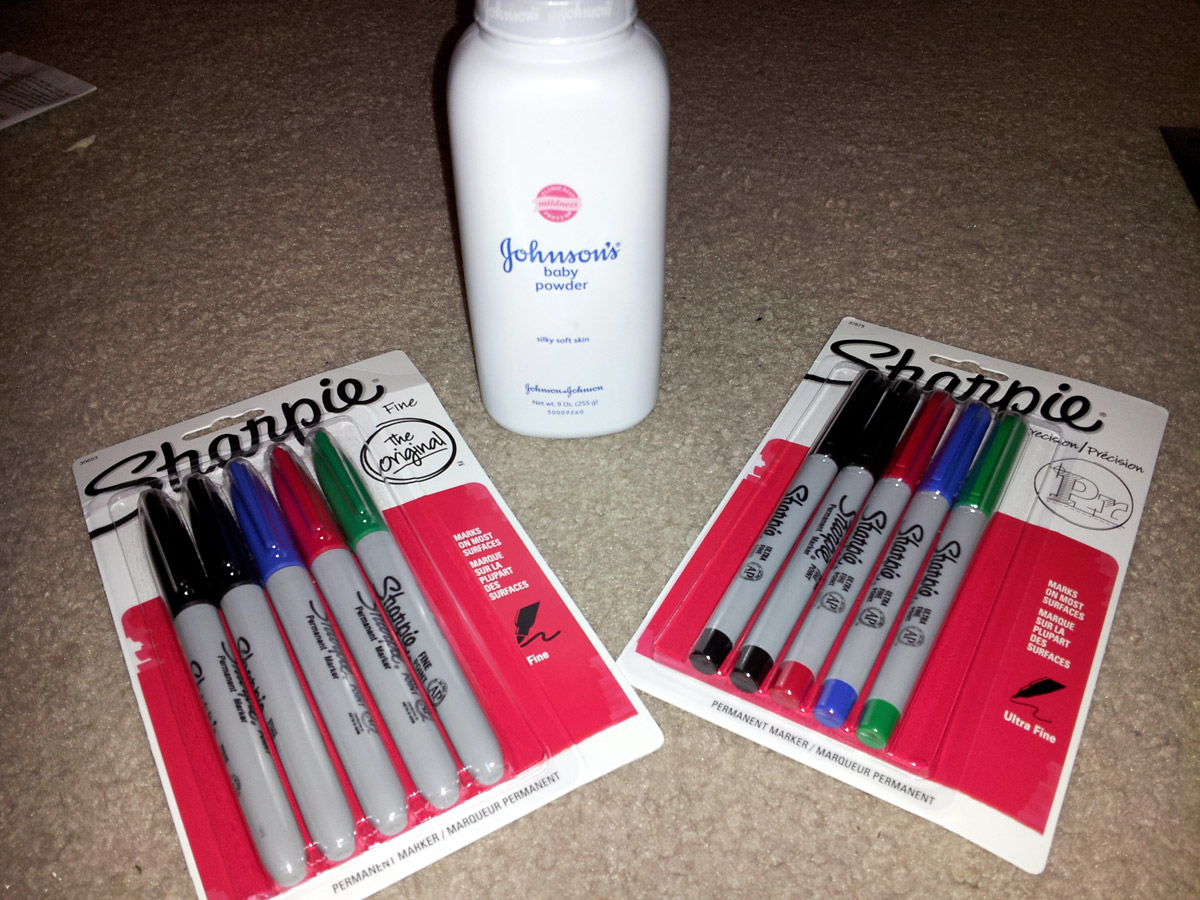 Baby powder to smudge on the top of the card for the auto to stick, and a few types of sharpies to practice with to see what I liked best.

So, with all that taken care of, I went to bed last night, ready for the big Canseco meeting.

But then I had an idea. What if I could design and print out a custom Allen and Ginters in time for the show? WAIT … I’m doing 3 autographs already … why not 3 A&G’s??? What if I could put them inside existing A&G autograph frame cards, after yanking out the non-Canseco auto that already exists???

So I got up out of bed, stayed up until 3 am last night, and that is just what I did.

Then I got up at 7:30 and went back to work on them. At a little after 12, I was in the car with my 6 custom cards ready to be signed. While I waited for Canseco to get there, I went to a few tables to pick up some one-touch magnetic holders (I have never bought these, because I generally never buy anything for my pc!) and some cheap-o A&G autos that I can pop out and put my customs in. I got in the line, and there he was! Mr. Canseco, in all of his muscle-ey glory.

I told him I had 6 things for him to sign and that they were my customs. He said “Really? Wow, these are cool!” I had him sign the 1st 3 in blue, and then the last 3 in red. I asked if he could put “1/1” on the red autos, and he said no problem … while signing the A&G’s, he commented a few times “this is the smallest autograph I have ever done!”

Finally, at the end, I mustered up enough courage to ask if I could have a picture with him, and he was fine with it, so a guy in the line volunteered to take my phone and take a few shots.

So, with all that said – here is what all made it worth it .. 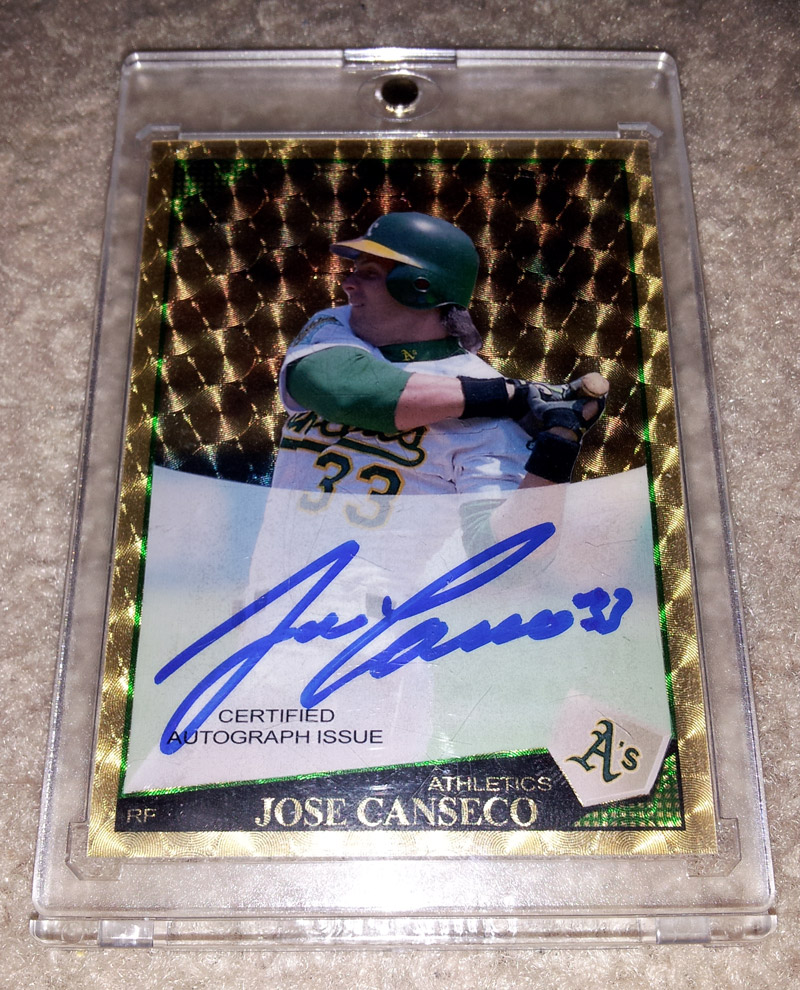 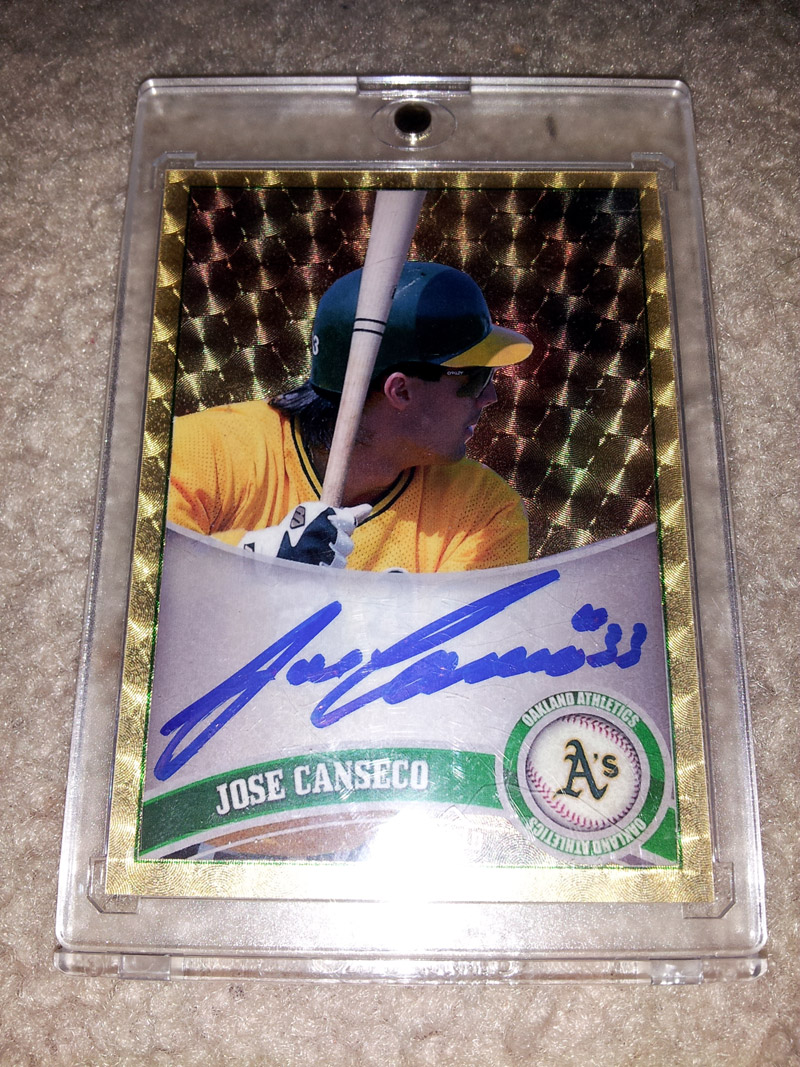 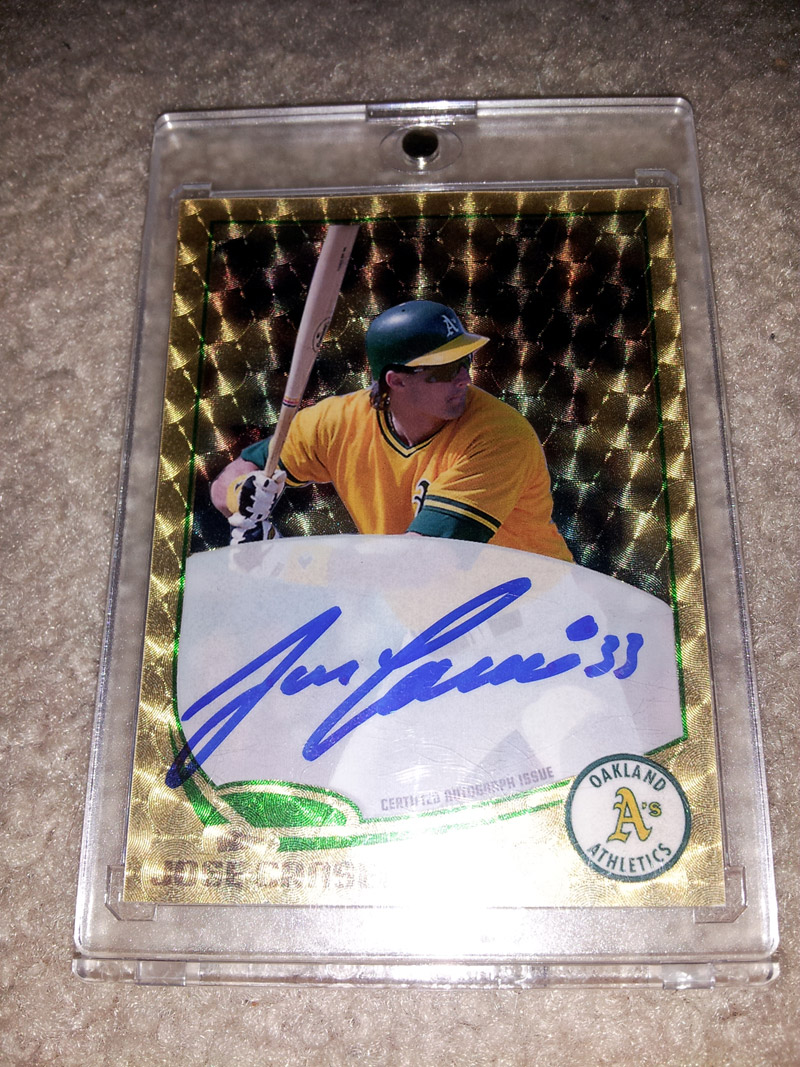 Yes, they have backs – custom wording and such with 1/1 gold stamping 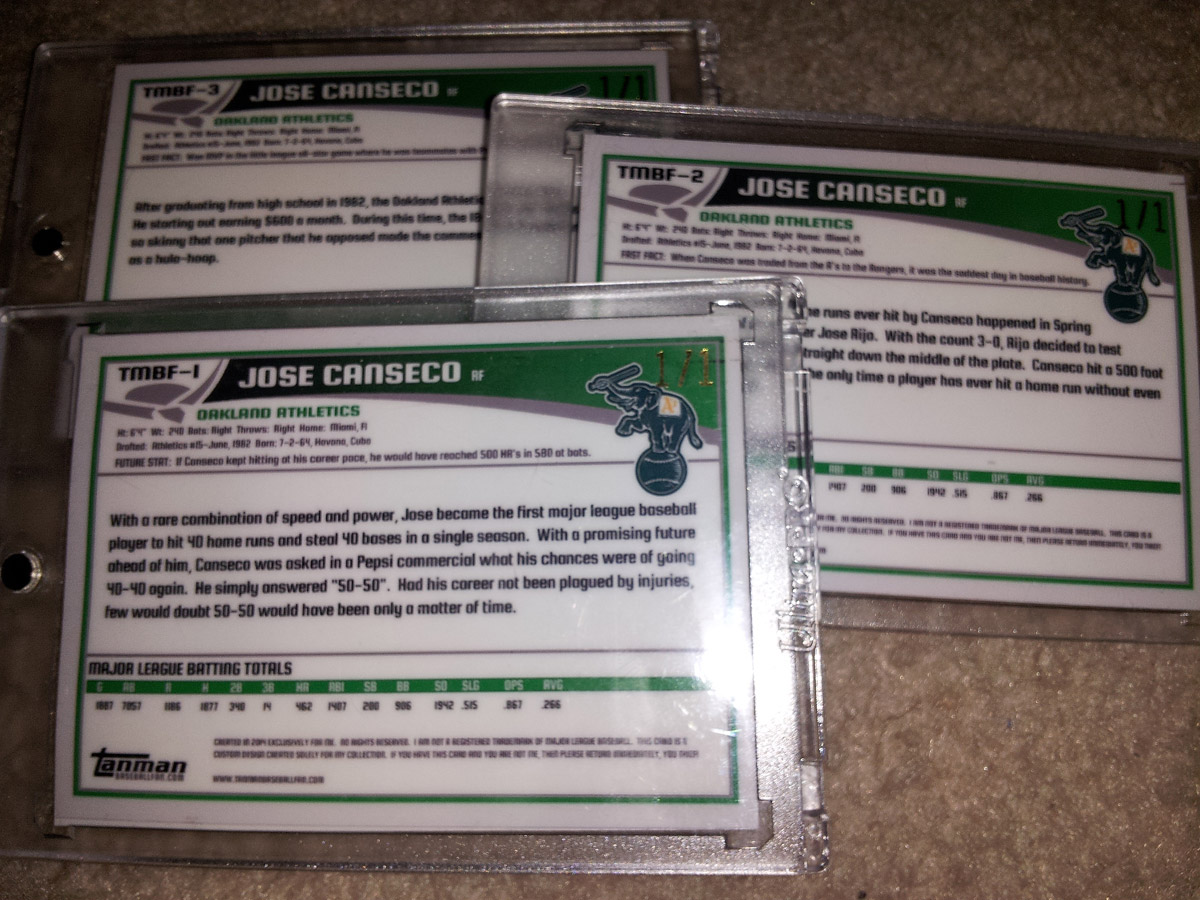 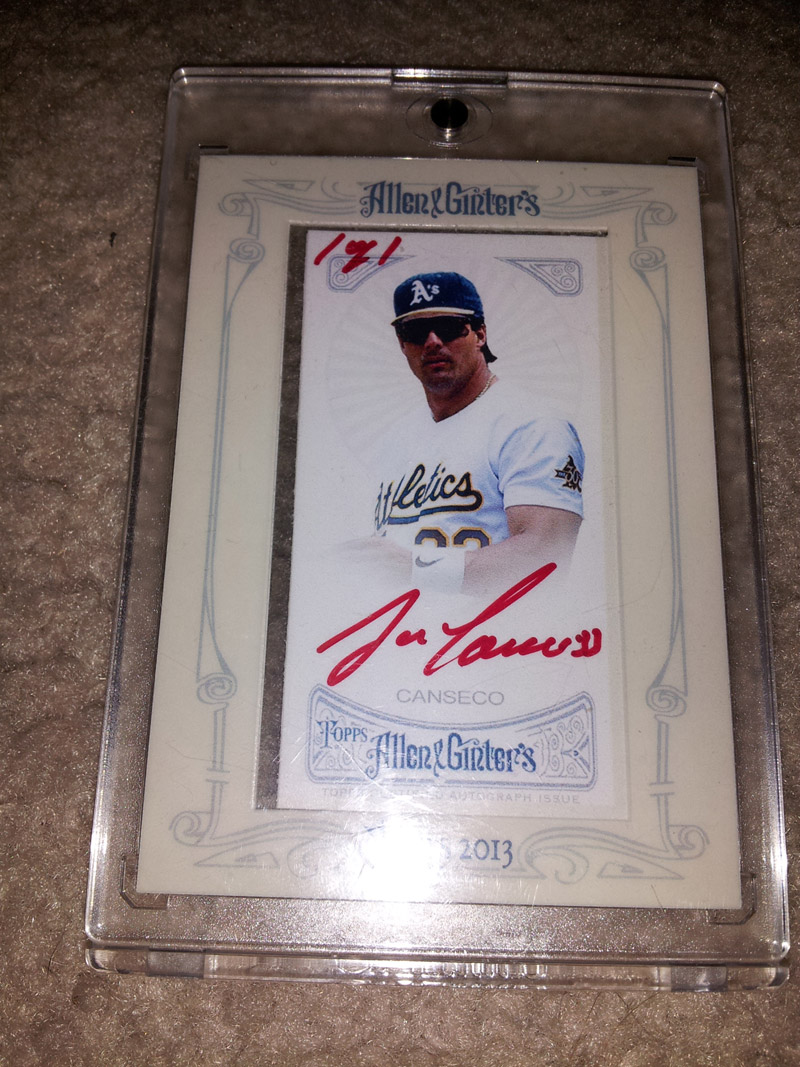 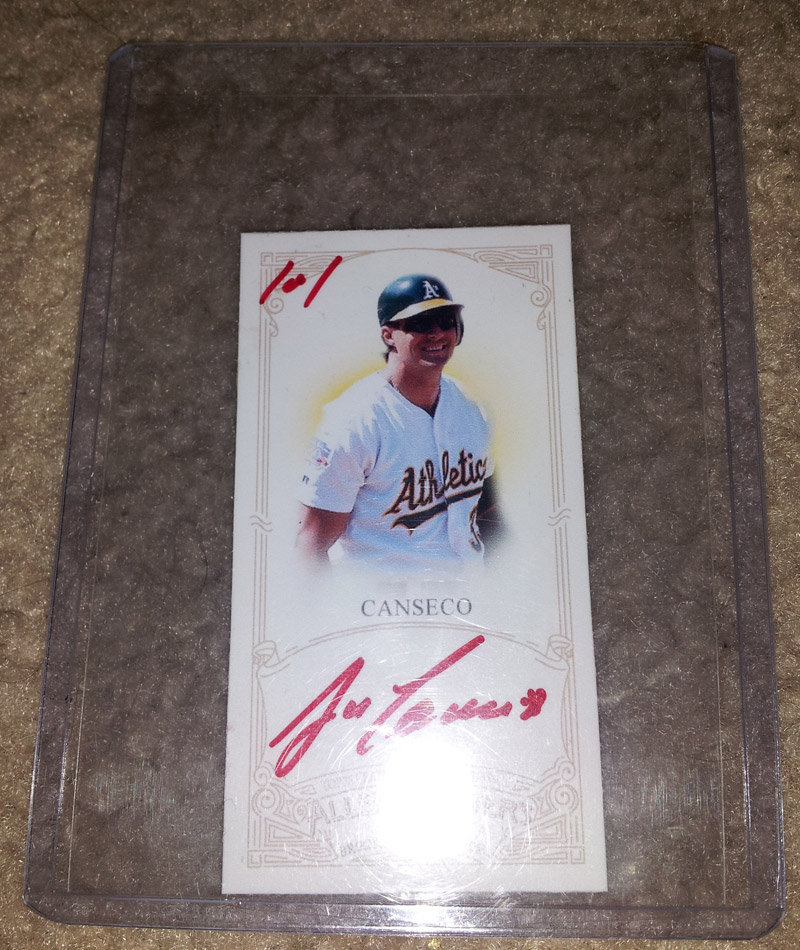 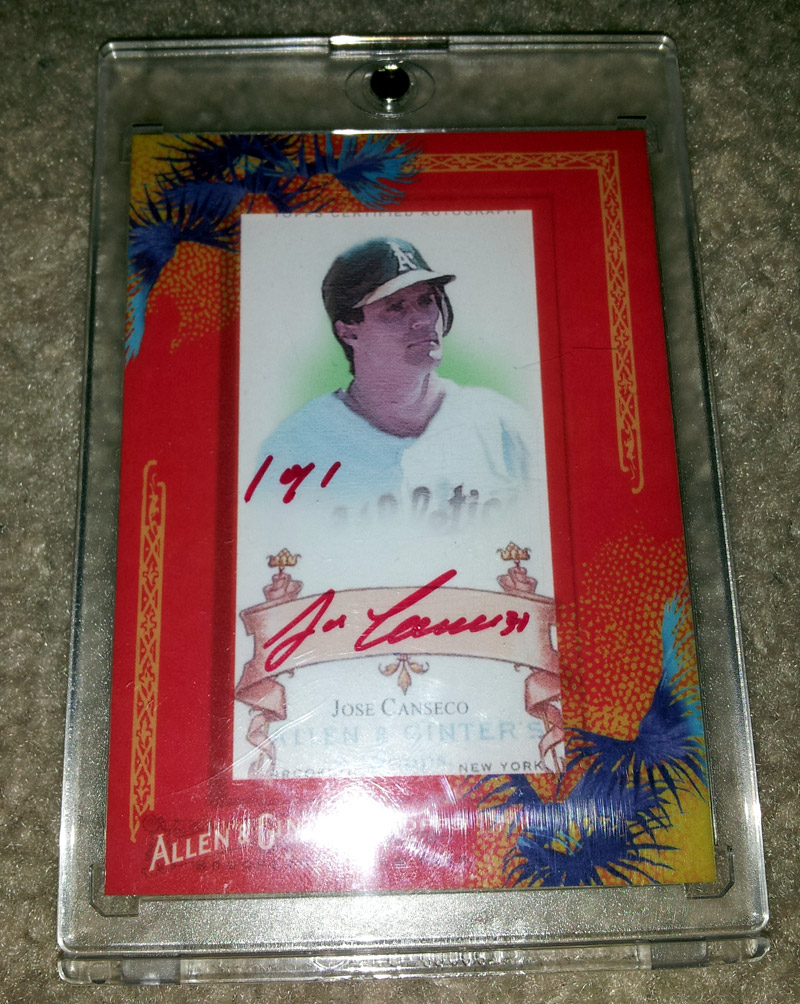 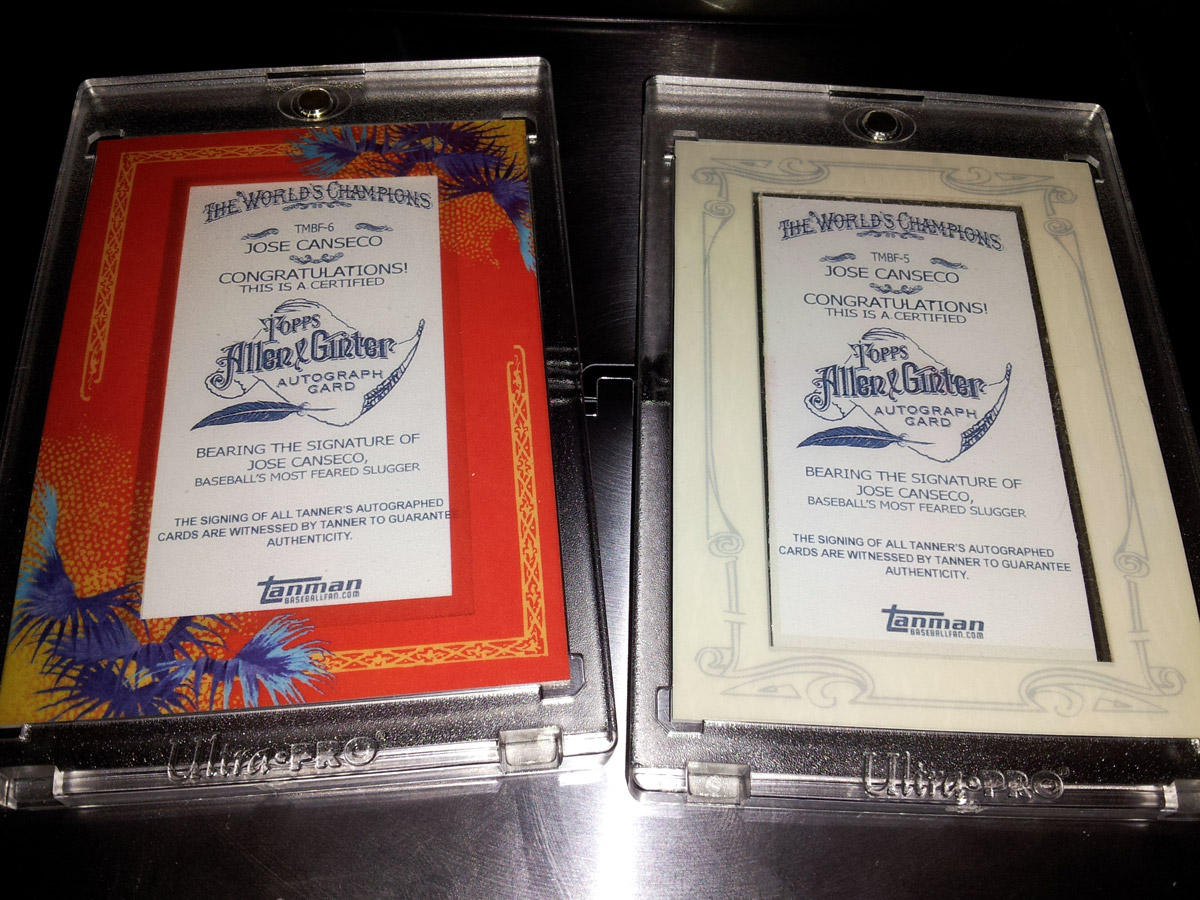 I am so stoked about these new additions, not to mention the memories. I’ve gotten so many compliments on the superfractors and the A&G’s today, it has been wonderful. I’m not sure anything Canseco I pulled from a pack would stand up to these cards, but then again, anything I pull couldn’t be what I put together to my tastes, either.

Finally, here is the pic at the end! 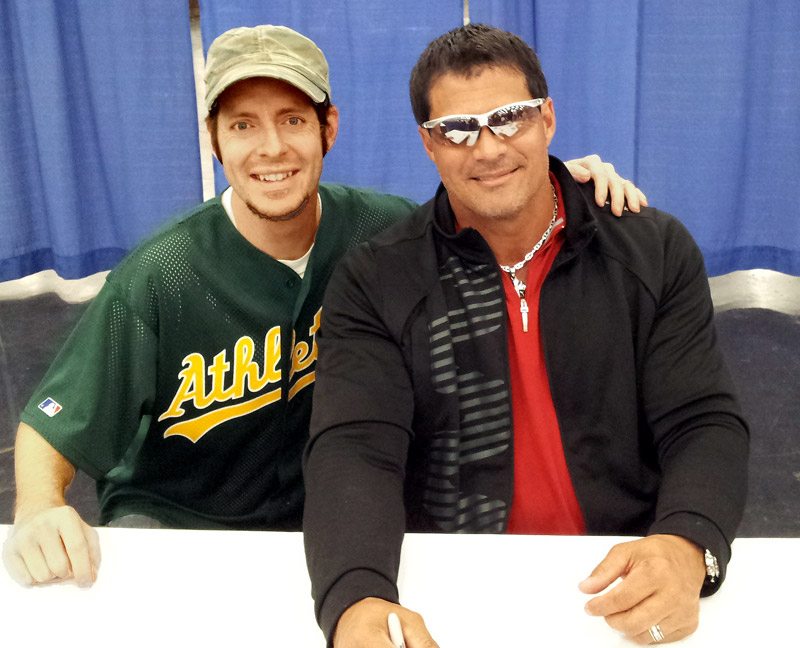 It is nice to have not just cards that I wished had been designed and put in the sets originally, but to know that I’m the only one with them, and they are autographed – and that Canseco gave me a compliment on them.  Such a great day!