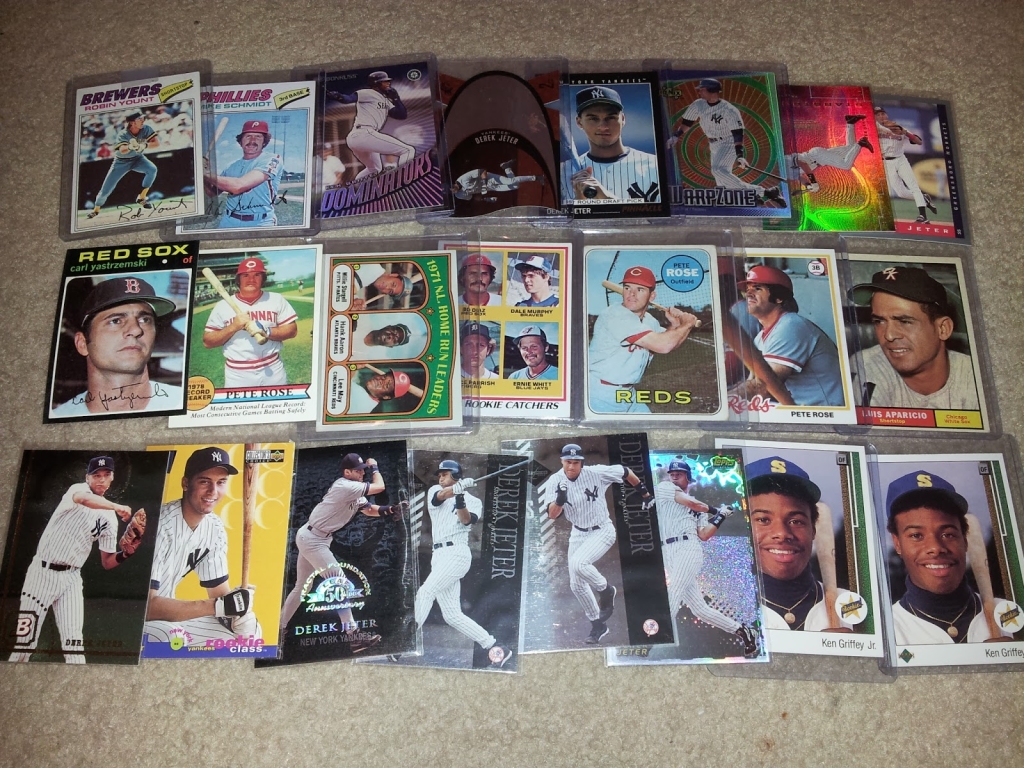 It has been nearly a week since I posted part 1 of this “How to Become a Part Time Dealer” series, and with some downtime now, I figured I would post the other part.  Here you go!

There is a lot of emphasis on the selling portion of this – everyone is hot to sell things, but that is only half of the equation.  Perhaps equally important is the buying.  If you don’t buy right, you can’t sell to make a solid return on your investment.

If you are new to the whole selling thing, or are dabbling in selling, you may find that your first sales will be at a loss.  Why?  Because it is possible that the “inventory” you are selling, was purchased with your “collector” hat on.  That is, you didn’t buy several things in mind to sell … you did to keep, or maybe you didn’t even think about it.  You love Nolan Ryan, so you paid $150 for that autographed baseball.  No way you would ever consider selling that, right?

And then your thinking started to change.

So, what do you do?  You throw up a hail mary and post it up for $150 just for the heck of it.  Never mind the fact that they sell for $50-$80.  What happens then, is that you end up sitting on it for a long time, until you finally come to your senses, and drop it to a price that is reasonable.

This is fine, as long as you want to keep it – nothing wrong with that!  But if you want to sell, don’t play games, and just post it up for the right price to begin with.

When I first got into buying cards to re-sell, I disillusioned myself into thinking I could re-sell.  I purchased under the guise of a rosier outcome.  Why?  Because I was buying cards that I wanted.  Not because I really wanted to sell!  This is when I first discovered jersey cards.  Oh boy … they were so addicting to me.  I bought every single one I could under $3.  Soon enough, I had amassed so many jersey cards, I really painted myself in a corner, because I was going to be hard pressed to turn a profit!

Record your purchases:  I came to my senses, and started recording every purchase I made.  In Excel, I showed for example, 428 Jersey Cards:  $800.  I then marked how much each one was on average.  That is about $1.87 a card.  I tried like mad to sell them at between $2-$5 each, and slowly but surely, the average amount I had in them became $1.50 per card, then $1.25 a card, and so on.  When I sold enough to get to the point that I had about 200 left, that I had on average less than a dollar each into them, I celebrated!  Down the road, I got to the point where I recouped all $800, and had 50 or so jersey cards left.

Making yourself accountable for your purchases is HUGE.  If you keep records with your sales as well, it also gives you something to shoot for, and extreme joy when you get into the black.

Be Flexible in your purchases:  There have been times that I went into a deal, and was, how shall I say, not so pleasantly surprised.  If you have been reading my blog for long, you know that I run into these situations all the time.  Sometimes, I let my feelings of the situation get the better of me, and mentally shut down, think the “deal” just sucks, and don’t try to make a deal.

Then, there are times that I keep a level head and put together a different deal.  A few months back, I met a fellow who had a bunch of 90’s inserts.  He sent over a spreadsheet, and I was salivating.  I mean, it was good stuff!  I drove a half hour away, only to be greeted with a handshake and an “I’m sorry, I forgot to mention – a dealer bought much of the “good” stuff in the collection a few years back.”

I kept my head cool, went through it, and ended up making a deal.  It was one of the best deals I made last year, too.

Diversify your purchases:  This isn’t for everyone, but it works well for me.  There are some dealers that only deal in high end stuff.  I don’t typically have much money in a single card.  What I do, is I think like a reseller.  I go and attempt to purchase everything.  Some people only want jersey cards, or some people only want vintage, etc.  I understand – many people have their sweet spot that they want to stay with.  But you could be missing out on a lot of profit!

A friend of mine comes over and routinely sells me a smattering of jersey/autograph/inserts, and he had started putting in MTG cards, as well as olympic cards.  I was initially sour to the idea … I mean c’mon!  Who actually collects that stuff anyway?

Apparently, a lot of people!

I quickly realized that a $20 bill for an autographed card of an olympic curler is just as green as a $20 bill from a 1989 Upper Deck Ken Griffey Jr.rookie.

Just this morning, I made a deal for some of my unopened boxes for a large collection of autographed 8x10s, jerseys, baseballs, sets, commons, Jordans, old wax packs and starting lineups.  If I followed my heart, I would have only picked out a few things, but following my head told me to get it all, and go forward that way.

Don’t be afraid to trade:  As mentioned above, I just did a very nice trade just this morning with a good friend.  We both walked away happy, and I think we will both be able to sell what we got from each other better than if we had kept our existing cards.  Plus, isn’t trading so much fun?  I am bursting at the seams to go downstairs and look through my new-found treasures.

Eventually, when you get enough practice in, your trades can become more complicated – and beneficial.  A few years back, a guy I knew said he was really interested in football jersey cards and inserts.  I was really interested in his collection, so I asked what it would take to do a deal, and he said he wanted a box with about $500 book value worth of football game used and inserts.

I shot an email to one of my dealer friends and asked if he could put such a box together for me.  He did, and quickly.  My dealer friend was happy to make some money off me, and the guy I was trading with was delighted to get some new football cards for his “crusty old baseball card collection”.  It was a collection that I would have spent 2 1/2 times more for if I just used cash.  A nice three way deal where everyone ended up happy!

Another note on trading:  don’t shy away from cash/trade situations!  If you don’t have the cash, or even if you do, but would rather trade off some things instead, it may interest you to instead to take part of your collection (perhaps parts that you have been having a difficult time moving…only if they are interested, of course!) along with your cash to do a deal that may have been otherwise out of reach.

Understand that there may be more than just what’s on the surface:  The question “do you have anything else?” could be huge!  Some of the best deals can end up that way.  I found a guy online who was selling a lot of 100 autographed baseball cards from spring training.  I was able to strike up a deal with him for 7,000+ autographed cards.  A small deal became massive.  I was able to make good money on that as well, as some people flew out from Colorado to purchase them from me.

Network, Network, Network:  I know, I know, the “network” word is such a businessy word again, sorry.  But it is crucial . Some of the biggest and best deals out there happen before anyone can even advertise them.  If you are known in your circles, and others as “the guy who buys sports stuff”, you may find several deals just falling in your lap!  You see, the moment someone has to take time to take pictures, and post a description of what they have, they are reliving memories over again, and the perceived value goes up in their heads.  When that happens, you have to either pay more, or do more to talk them off the ledge of their high price.

Go through cards in McDonalds:  This is a bit of a silly one, but it works.  I have had it happen to where I am meeting with someone in public, and some guy comes up “Yeah, I’ve got a whole closet full of cards that I don’t know what to do with.”  To which you respond “I’d be happy to help you figure out what to do with them!”  To some people, they see cards from their youth as just wasted space.  To others, they may need some more education to the fact that their closet full of those “old vintage” 1988 donruss cards are not going to be helping them in their retirement years.

Keep relationships going:  Some of the best deals I do with people are those who I have already done deals with over and over again.  Treat others the way you want to be treated.  Help them get what they want.  As Zig Ziglar said “You will be able to get what you want in live if you just help enough others get what they want in life.”  The same is true with dealing in sports cards!

Don’t shy from dealers:  Some people only purchase from those whom they are hoping are sitting on a gold mine and don’t even know it.  A lot of money will be left on the table if you don’t closely look at deals that dealers can have…especially in bulk!  There is a reason why dealers buy from each other.  Heck, some of the biggest deals are made at card shows before the doors even open!

Use ebay as a guide, not as the bible:  We are in what you could call a “post-beckett” collecting era, where price guides mean very little.  Because of this, people have gravitated toward ebay to get some more accurate pricing on things.  But keep in mind that not everyone buys off ebay, or even cares about ebay, for that matter.  Just because someone sold 50 Bo Jackson rookies for $10, doesn’t mean there isn’t a buyer locally for $20.  Conversely, just because an auto patch card of Bryce Harper just sold for $200, doesn’t mean you will be able to get more than $100 for it locally.  Take this into consideration when making a purchase.

That is all for now.  If you have any others to add, please feel free to post!