A Gentle Answer Turns Away Wrath, But a Harsh Word Stirs Up Anger…

If you have been reading my blog for a while, you may recall a guy I bought some cards off of – I agreed to buy them as long as he brought or sent me his Chrome Red Refractor of Peyton Manning.  That day never came.  Until, that is, this past weekend.

As I was browsing for some cards online, I saw the card for sale with a bunch of other cards.  A Topps Chrome Red Refractor of Peyton Manning.  My Peyton Manning.  This had me FUMING.  Where does this guy get off trying to sell the card that was mine?!?!?

It is not going to go down like that.  So, I wrote him under a fake name, and said my phone was on the fritz (he has my # already in his phone, so I didn’t want to alert him.)  He wanted to meet at a public place, so I told him we can meet at the burger joint down the street.

I got there a little early to scope out and make sure it was just him alone.  The creep pulls up, and I put on my hat, then went inside, pretending like I didn’t see him.  Along with my baseball cap (turned backwards to elicit a certain danger) and facial hair I figured he may have a little bit of difficulty placing who I was.  Mission accomplished!  I caught him sitting down with the cards.

“You must be Shane, unless there are others who like to bring sports cards to lunch with them.”

“Not much…let’s take a look at these cards!”

Let me stop right there by saying I am in no way a huge Manning fan.  It is just that I have waited 4 months for this card, and thought this day would never come.  It is because of all that has transpired, that this particular card has acheived near white whale status for me.

“The owner of this Manning?  Yes.  Thanks for bringing it to me.”

I told him that will be all, and as I stood up to walk to my car, and slipped the Manning in my front pocket he LUNGED at me while swearing up and down, ripping part of my pocket open and nearly damaging my Manning.

With a cooler head, I would have not acted this way, but in the heat of the moment, I turned beat red, grabbed what probably was about $1,800 worth of cards and rammed them in an already stuffed garbage.  Then shaking furiously, I pointed at him and gave him a pretty good tongue lashing.

He just stood there dumbfounded.  As I walked out in slow motion, the burger joint exploded and went up in a glorious cinematic blaze, with me merely smirking, and never even looking back.

LOL that sure was fun to write!

Ok, so what REALLY happened was this:

I found his ad online, and became quite upset about it.  I decided to text him and tell him that I knew it was him posting because the Manning was on the list.  I mentioned to him that I would like to take a look at the cards.  He told me that he didn’t know if he felt comfortable with it the way the first deal went down.  He said he felt like I took advantage of him.

I was confused at this and told him I didn’t know how I could have taken advantage of him, as he agreed to the price, made a promise then didn’t deliver.  After saying this, I told him either way, I thought this would be a good opportunity to get the Manning if I bought all the cards.  I said I didn’t like there being bad blood between me and anyone, and hope this clears the air.

He agreed to meet me, and things were about as normal as could be.  He even brought me a bunch of freebie cards as a peace offering!  I ended up buying the cards from him, and it ended up being a great deal.  There were about 250 memorabilia / autographed cards total including 5 autographed cards that are numbered to less than 10.  However, the two that stuck out to me were: 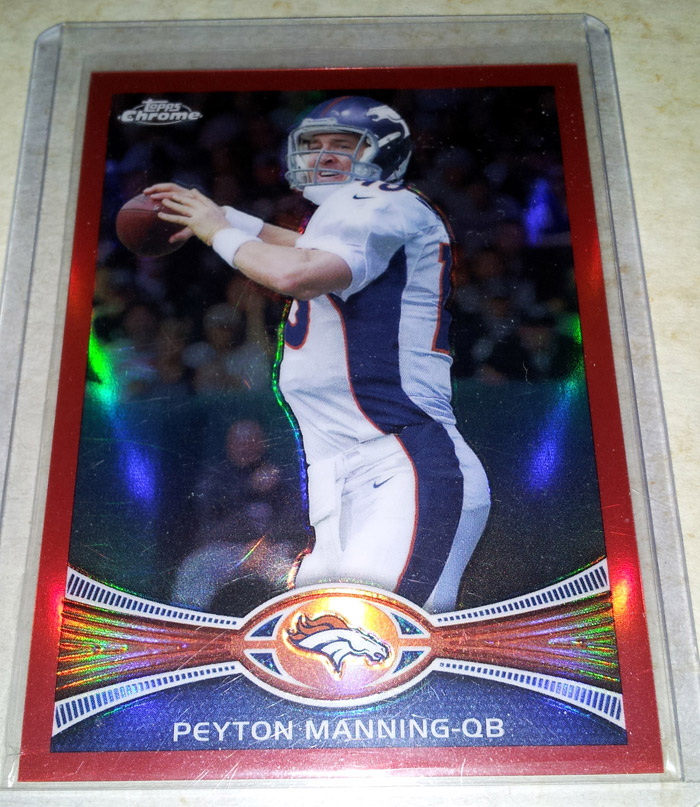 I’m very happy with how it all happened.  I not only was able to get my Manning and make some good profit on the rest of the cards, but also have a guy who, I see myself doing several deals in the future with.

The title of this blog is a Bible verse from Proverbs.  I don’t think we would have gotten anywhere if I started out guns a blazin’.