Mining for Black Diamonds and the Case of the Missing Bautista

Greetings from hot San Antonio!  As I write this, I am in the hotel with my family.  I took them for a vacation to Sea World this 4th of July weekend.  I have been meaning to update my blog, so with my wife passed out on the bed from lack of sleep, and my son on his ipod, I figured this would be the perfect time!

This past week has been another busy one.  First off – a few gems!  I picked up a cool small collection of autographs.  A Nolan Ryan autograph, a Tom Seaver vintage autographed baseball, a Whitey Ford autographed 3×5 and this … 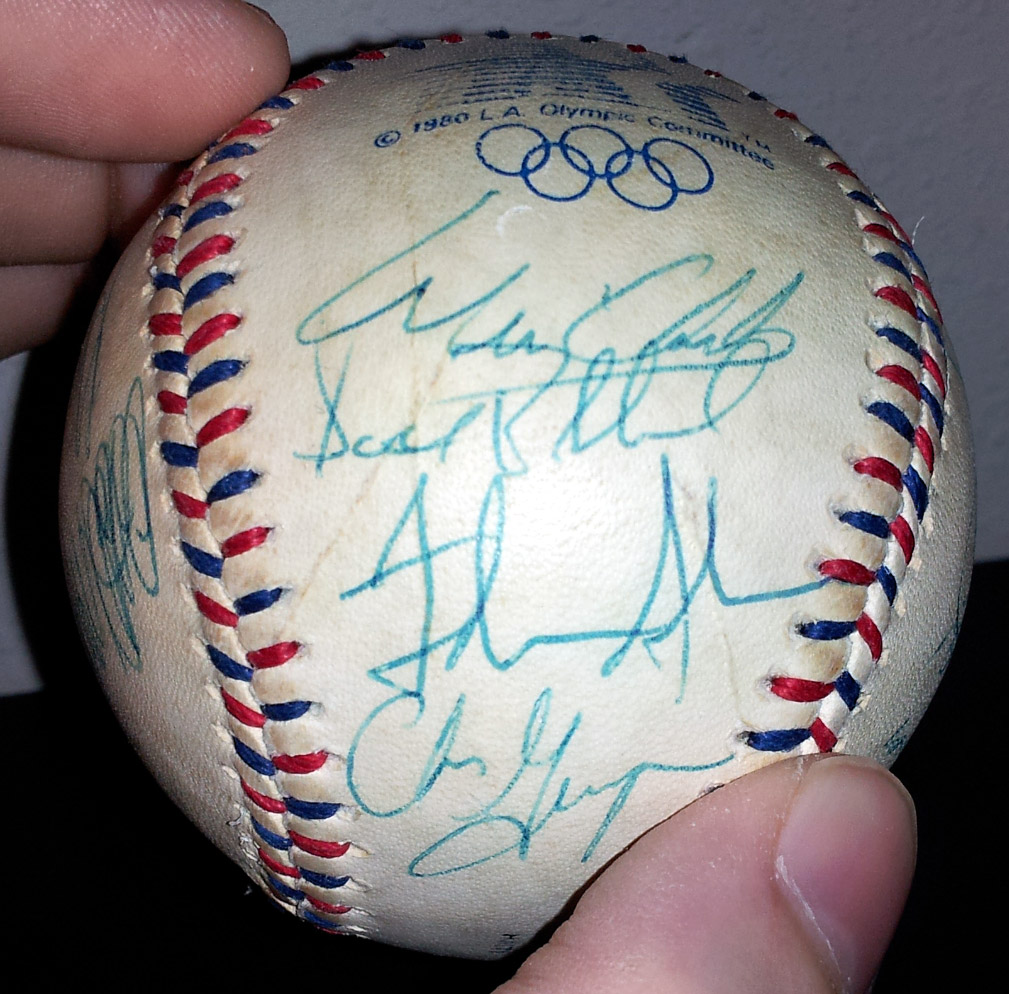 A game used 1984 USA Olympics baseball signed by the whole team!  Yes my friends, that means that the signatures of Mark McGwire, Will Clark and Barry Larkin, among others are on it!  Very pumped to have this in my collection …. until it finds its rightful owner!  🙂

Now, onto a few others pickups here.  I found a few people selling their collections.  One was about 30,000 and the other, about 100,000.  I decided to drive one evening to check out both in one swipe.

The 30k collection was asking a good amount.  She was a reseller, but didn’t know much about cards.  She mentioned that the cards would go for much more on ebay.  I told her cards are my bread and butter, so I would let her know if it were true or not.  Right off the bat, I opened up a 1987 Donruss set, and sure enough, a few of the sealed packages were open.  I told her the McGwire rookie was missing, so probably others were too … though the Bo Jackson was there.

I went through a few of the mix boxes and noticed a few Jeters, so I thought it would be worth a try, provided she accepted a fraction of what she offered them up for.  I’m definitely not into picking up collections unless I have an interest in them and can make money on them!

I got home, and was pleasantly surprised!  A few of the boxes were nothing but the red 2000 black diamonds.  Not too big of a deal, but these boxes yielded over 50 each of Jeter, Bonds, Ripken, Clemens, Griffey, Maddux, etc!  There were some SP Authentic of the same guys, as well as some inserts.  Nothing high end, but about 800 cards of super stars.  I was very happy.

The next collection was interesting.  The guy claimed he had cards from the 50’s to about 2005.  He said this was his collection; that he hadn’t looked at it for years and years.  That he bought packs and that is how he got most of the cards.  Something seemed strange, but I figured why the heck not … so I decided to check it out.  He mentioned most were 2000-2005 and not many at all were 80’s to 90’s junk.  He mentioned there will be a lot, and I mean a lot of good rookies from the 00’s.

On my way out the door, I noticed the email address … remember this story?  Yeah, the lady who I was speaking with via email was the same lady who offered the mis-cut Cobb that someone else had offered.  Something is up.

I went over there and the husband mentioned he was moving.  I asked where to, and he said he didn’t know.  He said that he used to buy a few storage units a week and such, too.

I dove into the cards, and you guessed it … cherry picked to the bone.  Much of it being 80’s 90’s stuff!  I find it hard to believe that a collection had not been gone through … and recently … when you go through a box of rookies where there are multiples of everyone, except for Jose Bautista … the star player who has only emerged worthy of being pulled from such a box within the past few years.

The one thing that saved it for me is that I was able to get them for a price decent enough, and that one box had about 2,000 cards from the 70’s.  There were a small handful of 50’s and 60’s cards.

This was only part of the story, due to my limited writing time today, but I continue to be baffled by the people that continue to lie.  It seems like every time I buy a collection, someone is trying to bs.  I don’t get it!  Come on people – that is not how to treat others.

Anyway, in the end, I am happy with the purchases, and I got a few good stories/experiences out of them.