After buying a huge collection, and dealing with a bunch of other stuff in life, I found myself just last week for the first time, wondering if I should even go to the show this past weekend.  I met Jose Canseco last time … how can I top that?  Short answer: it can’t, and … it didn’t.

As a matter of fact, Friday was probably one of the weaker shows I went to.  I still had fun though.  I brought a few boxes of unopened cards to wheel and deal with.  Within 5 minutes of walking through the doors, a few dealers bought 4 off of me, so that was pretty cool.

A little further in, I saw these mini Jurickson Profar bats that were autographed for sale.  I picked up all six of them.  5 minutes later after walking around a bit, I was able to sell 5 to another dealer for $20 more than I paid for all of them, so that basically paid for my parking/ticket to the show, plus I got a free Profar autographed mini bat out of it!  I got a kick out of that, because it was the first time I remember flipping something from one table to another since I was a kid. 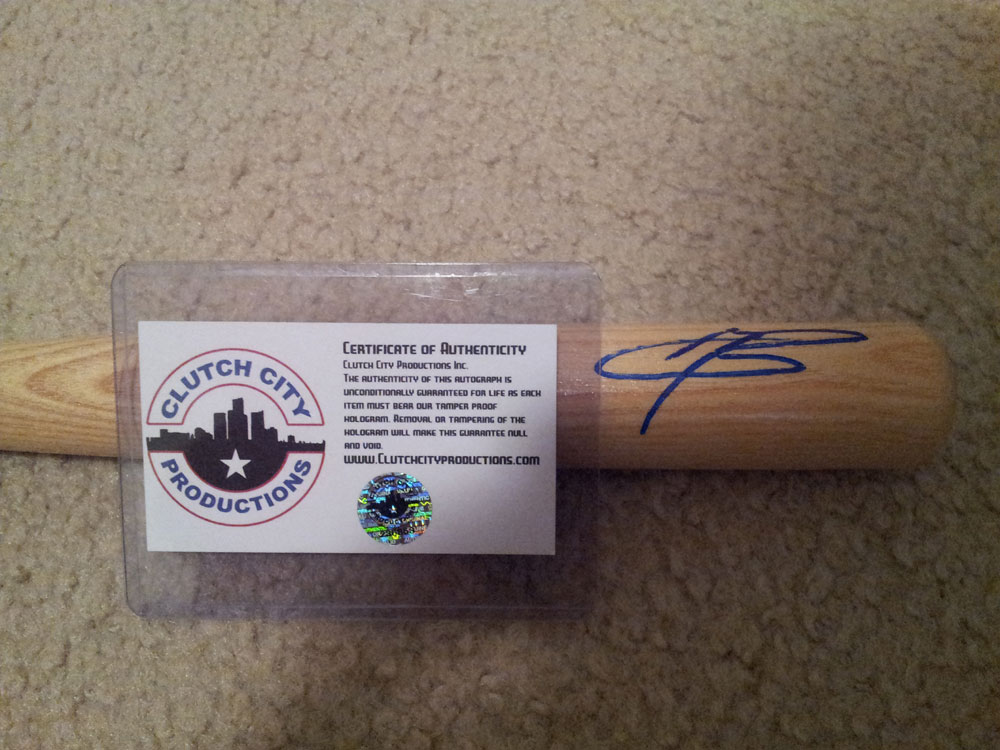 Moving along, I picked up 80 autographed prospects for cheap, as well as this nice Triple Threads auto/jersey of Zach Britton.  I’m a sucker for TTT’s! 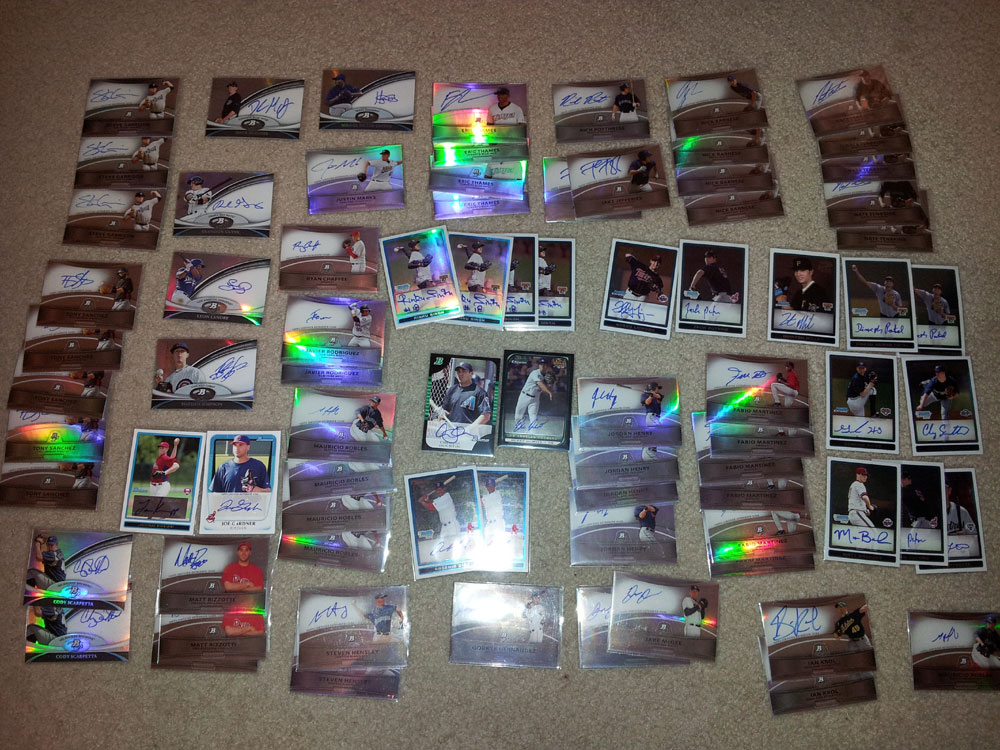 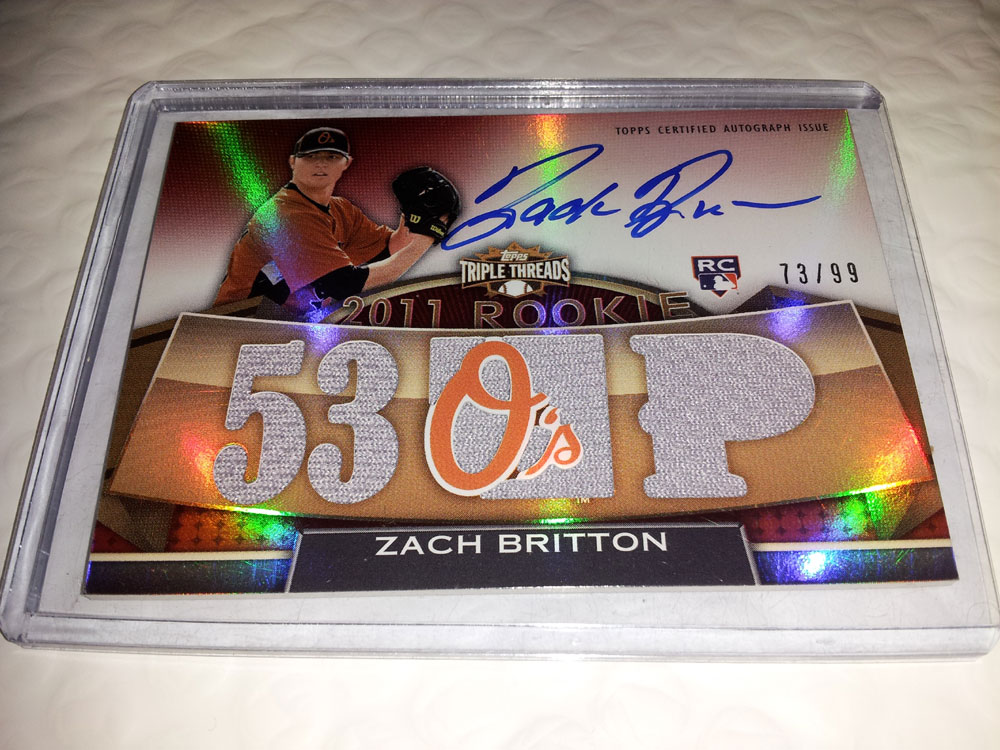 The same table had a 2010 Topps purple chrome refractor Mike Stanton rookie, but we just couldn’t agree on a price, so I had to walk.  Truth be known, it was $5, and I wanted it for $3.  (Should I really had admitted that?)

A dealer who I do lots of business with actually had brought 26 autographed baseballs.  One was of Barry Bonds, one was of Jose Canseco … on a ’99 All Star game ball, one was of Jurickson Profar, a Josh Hamilton, a Lance Berkman, and there were several hall of famers like Bob Feller, Orlando Cepeda, Warren Spahn, etc.  Again, we just couldn’t come to a price.  I told him I would visit him again on Sunday if he hadn’t moved them to see if we could do anything.

Up to this point, I hadn’t dug into people’s boxes much.  I think it was for fear of missing out on deals elsewhere.  I finally buckled down and checked out one table.  I found two very interesting cards:

Saturday, no card show was to be had for me, because I was wrapped up from morning to night with birthday parties for my son.

The next morning, it was storming but I was not going to let that deter me from an afternoon of cardboard bliss.

But then, my car had other ideas.

When I was down the road, the battery light came on.  With it storming, I thought it would be smart to go back and pop the hood to see what I could see.  Yup, battery corrosion and lots of it!  I decided to feed it some diet mountain dew, and go on my merry way.

I made it there, and was happy I was able to.  I brought a few more boxes to deal with.  I was sure selling a few of my ’08 Goudey and Masterpieces would be a hit with a previous customer, but he passed.  I then asked if I could dive into his quarter boxes and grab around 100 for an unopened 2007 Upper Deck retail box and he agreed.  Here is what I pulled out.  I was very happy with the swap! 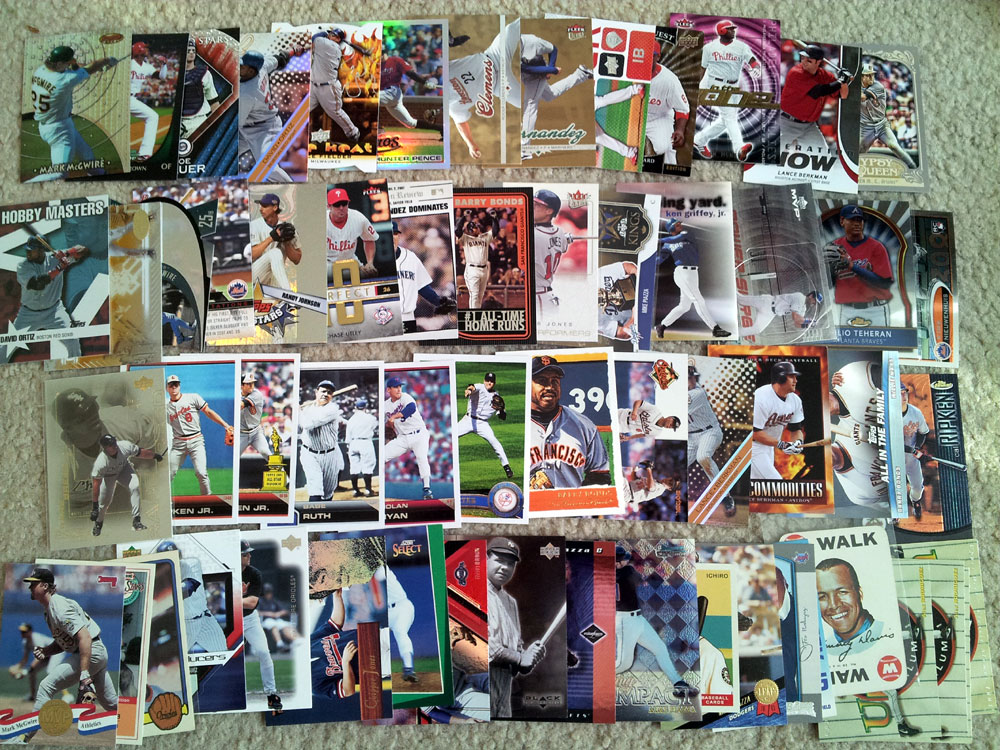 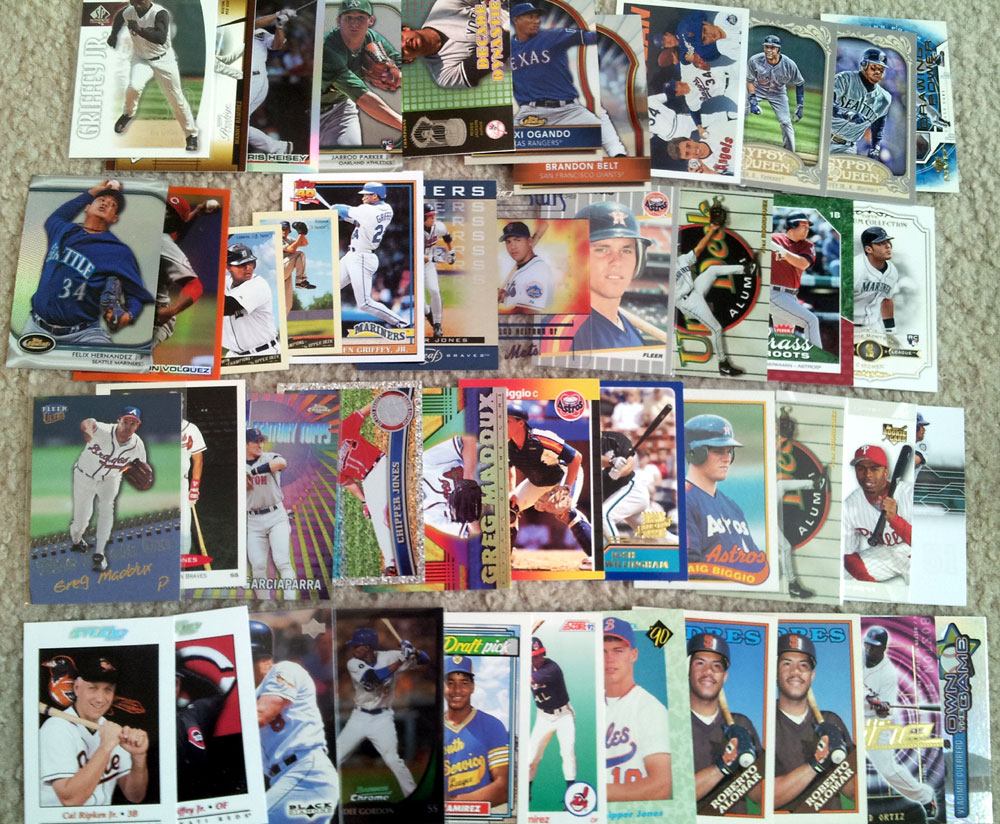 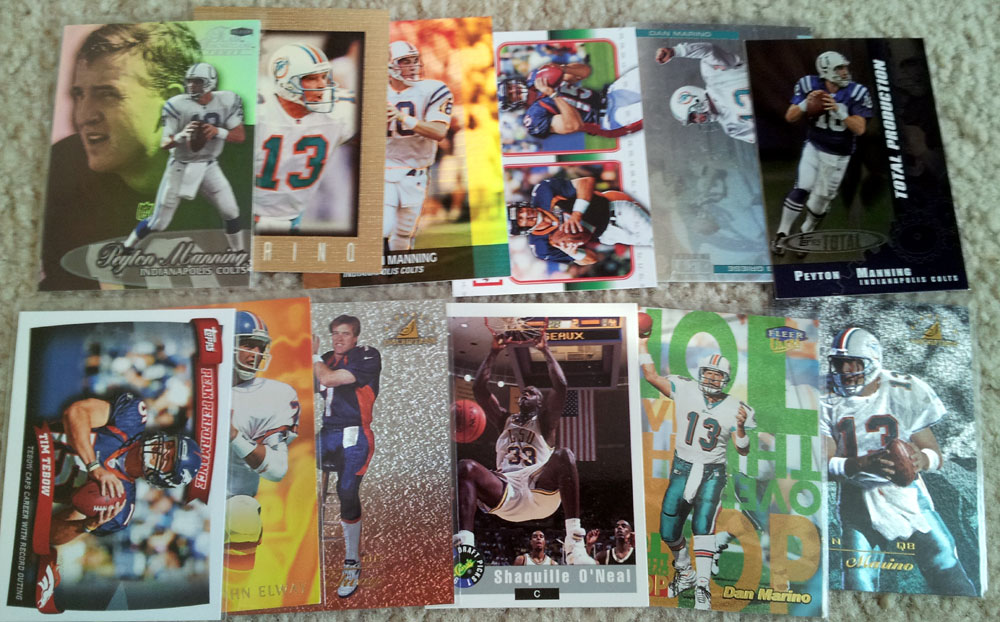 Part of me felt like I had not invested my time wisely sitting pulling out tiny cards like these, but this is kind of my wheel house.  I love the Shaq classic rookie, the King Felix finest refractor, the Arod and Biggio rookies, the classic Chipper rookie, etc.

I stopped at the dealer with the baseballs.  He said he sold one, so he had 25 left.  We made a deal!  Here is what I got. 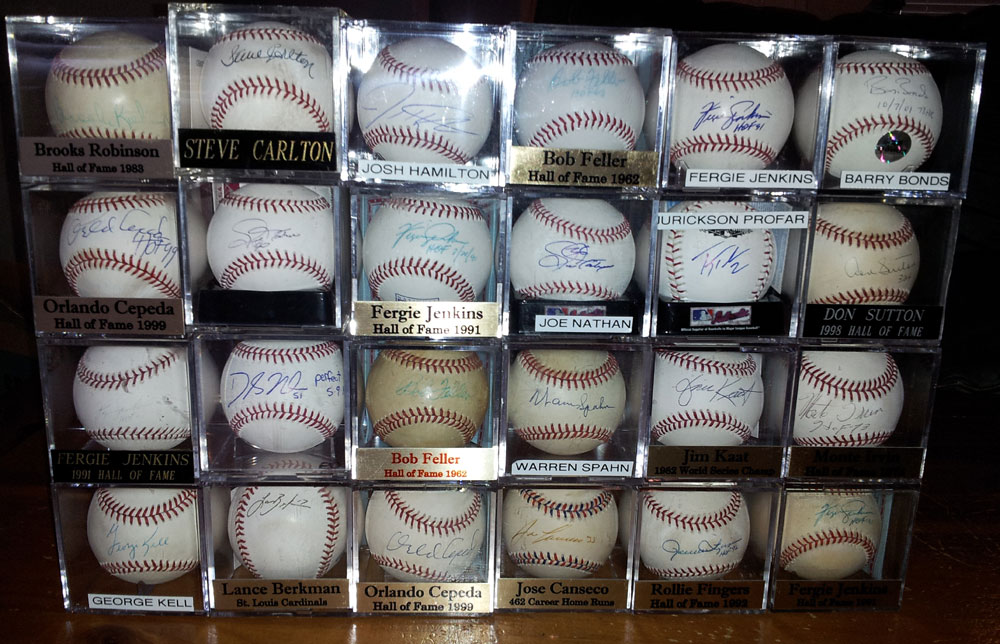 Moving on, I hit a few places and dug to get some cheap cards that I loved.  One in particular … the purple Stanton!  Hurray!  Such a purty card. As well as some vintage goodness. 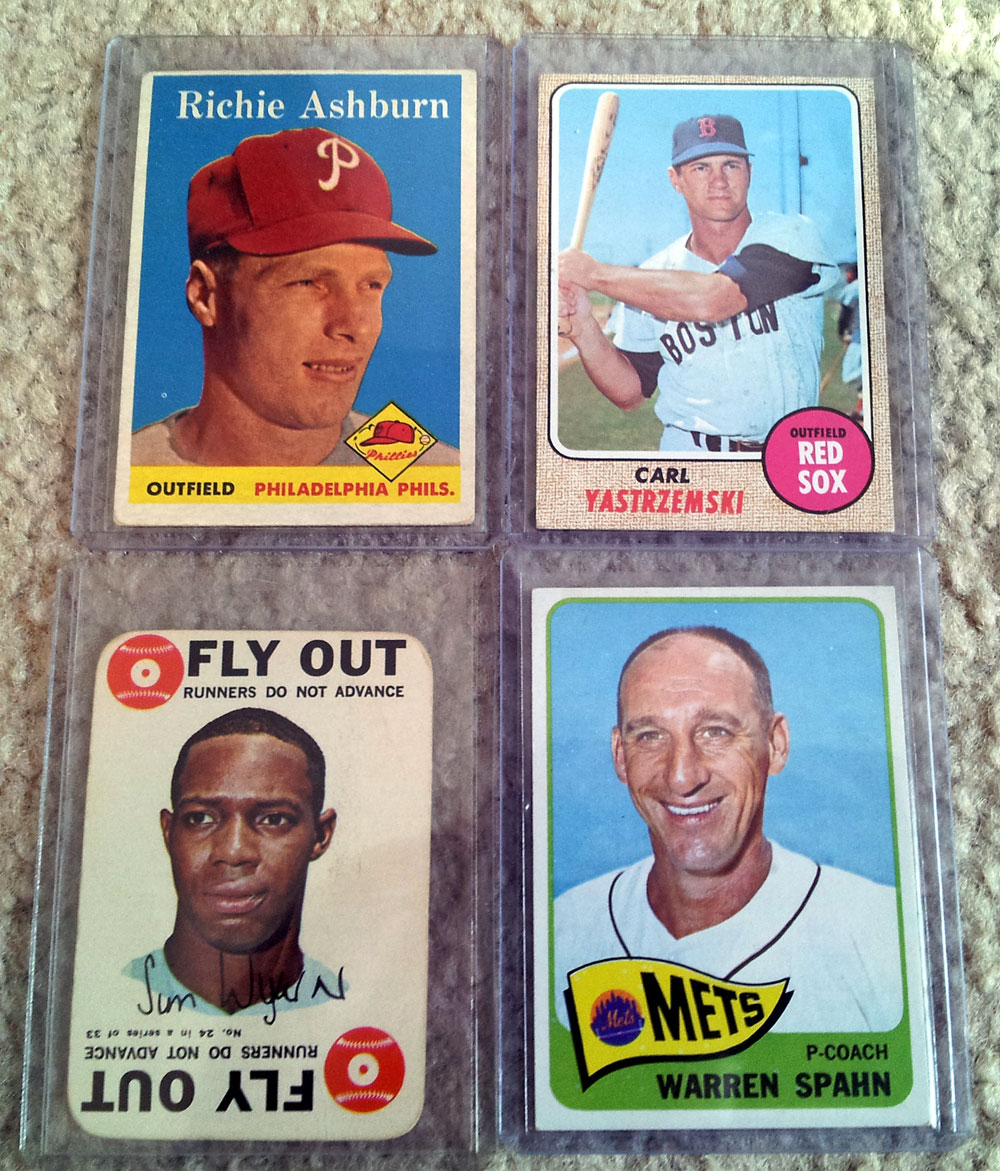 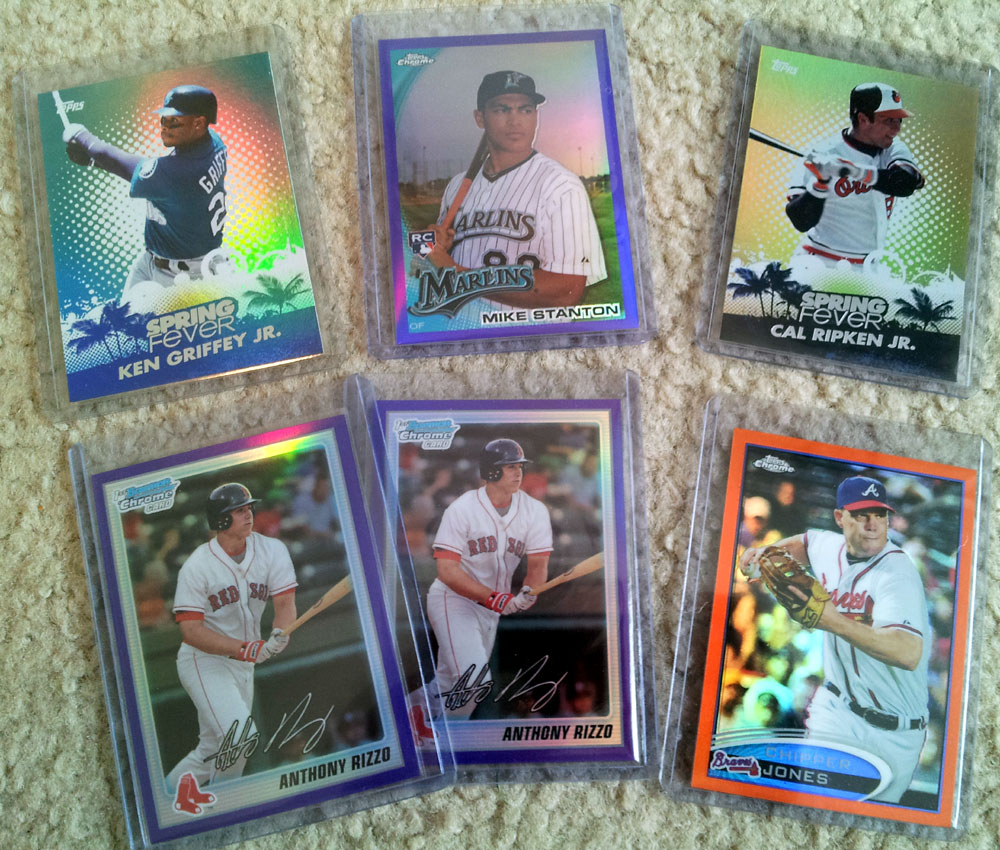 What is not to love?  Some hall of fame vintage cards, and some new shiny goodness.  I love the Stanton, the Rizzo purples, the ’13 Topps Griffey/Ripken inserts and the Chipper orange refractor oh-so-much.

I went back to the place where I got the Profar bats, and noticed they had a bunch of lower dollar 8×10 autographs.  I was able to buy 97 of them total, but that wasn’t all.  I had a good conversation with the owner, and they said they brought in Jose Canseco to do a private signing.  Let’s just say, it was intriguing enough to me, that I may consider doing that myself in the future.  Stay tuned! 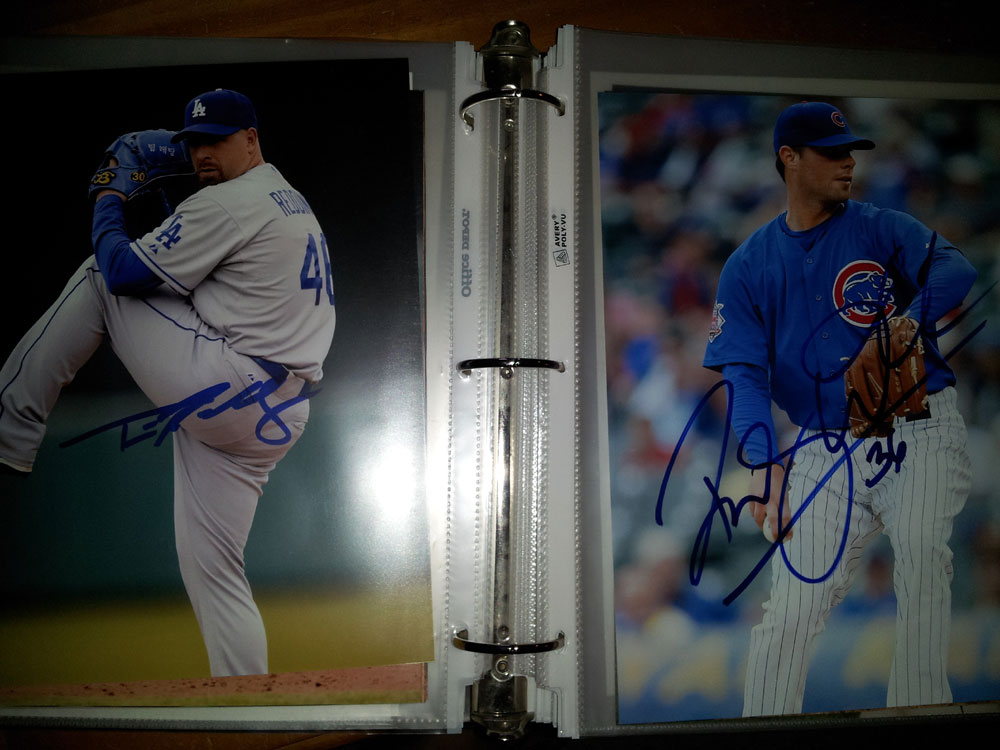 At the end of the show, I went to dive in the quarter boxes of another dealer I know, so I could trade a box of 2007 Upper Deck.  100 cards.  I told him I think I can find enough stuff I want for 2 boxes worth if he was game.  He said yes, and I was quite happy.

Then he said … “Can you believe this?  I offered this guy the entire lot of my boxes to blow it all out, and he didn’t even take it!”

That stopped me in my tracks.  Should I really be satisfied with walking away with just 2 handfuls of cards for 2 boxes, or should I offer him all 6 of the boxes I brought (’07 UD, ’08 Goudey & ’08 Masterpieces) plus some cash to wipe him out of his quarter stuff?  DUH!

I made my pitch, and he accepted.  I requested the use of his trolley to haul my newly acquired batch to the car, after I made one pit stop to the dealer who was holding the autographed baseballs for me.

He brought up his quarter boxes also, and after talking a while, I was able to get him down to less than half of what he was asking initially, so I wound up taking home everything. 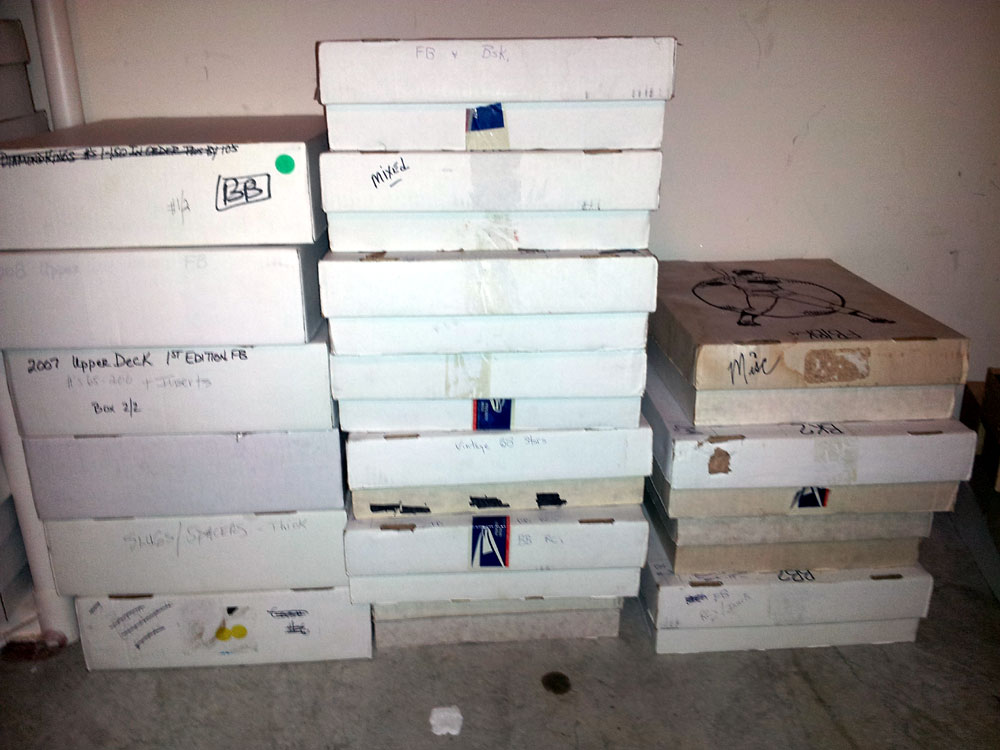 It’s not as if I didn’t have enough already, heck – I still have 20 boxes left from the same dealer from the last show!  I was able to make really good money off them though, and that is why I am such a sucker for these quarter boxes.

All in all, it ended up being a good show – the last 5 minutes ended up being the most action, in terms of quantity, but I really did have fun…as always!