The Quest is Over!

A while back, I remembered seeing online that someone was selling/trading their Josh Hamilton 1999 Topps Traded autograph.  I contacted them, and didn’t hear back.  I tried again, and they continued to ask me to make an offer.  I said I don’t really do offers, and they said they would take $500.  I told them that was more than I could get one for on ebay, and said I was thinking less than half.

I never heard back.

Flash forward to now – curiosity struck me, and I tried searching for it again.  The ad was a few weeks ago, but I figured I’d try.  I emailed – no response.  I texted, and finally got a response.

After a little more back and forth, they said they would meet me about 20 minutes away from where I live.  His brother apparently had a collection as well, so I told him to bring those too, if he wanted to sell.

I halfway figured they would be a no show, or something would go wrong.  I was a bit nervous.  Not only was I about to make a purchase of this card … it was to finish my quest!

They come up and show me all the cards and … well ….

I have not kept up my blog for this quest like I should have, but the other deals ended up in cash, plus I was able to trade 2 jersey cards for this:

I wanted to keep this a secret, but it didn’t work out all nicely as planned … the other card I traded for was this (which by the way, I would have traded straight up for the Fleer set anyday!): 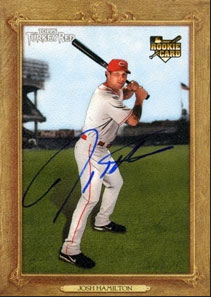 I found it funny that an autographed Josh Hamilton rookie was one of the cards I got in this trade string.

The icing on the top is that both these cards are now freebies, on top of the Hamilton!

I got the Turkey Red Hamilton from a guy who runs a website on doing in person and through the mail autos.  He documented everything for every player, and this one caught my eye.

But the story doesn’t end there, boys and girls.

When I bought the 1999 Topps Traded Josh Hamilton autographed rookie, I also picked up his entire collection for $250 – it had a lot of great stuff!  Probably over 100 jersey/autographed cards including Bobby Murcer, Bob Gibson, etc. a handful of 50’s/60’s vintage hofers in what I would consider NM shape, a buyback Bagwell auto, the big name early 80’s rookies, etc.  I *immediately* went to work when I got home to start working my network to move some of these pieces, and it looks like I’ll already be in the black with this collection, with a lot more left over.

And we all lived happily ever after.  At least until …..

With the door of my vehicle open, to put the cards in, and block the wind, I got up and shook his hand to say good bye.  I heard something drop.  We both looked for a split second and didn’t see anything.  Oh well.  I proceeded to close the car door.  It opened up again.  I looked down.  Hmmm, that’s weird.  my phone fell out.  Oh well.  I picked it up and …. 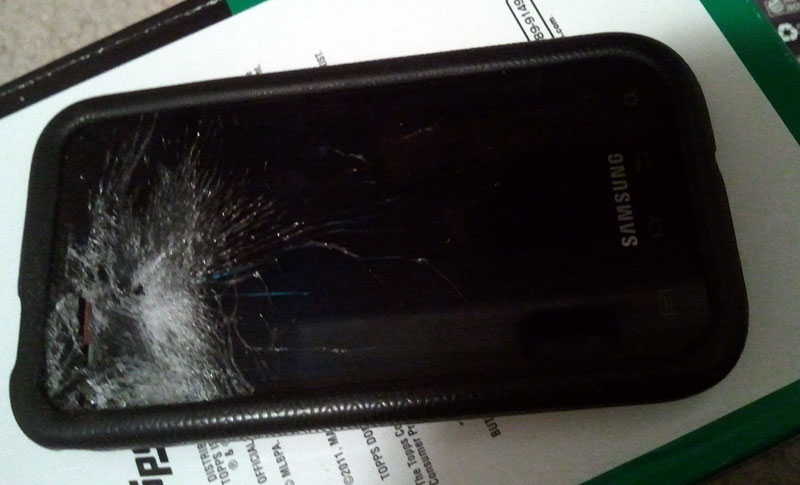 Here is the lesson of the day:  If you hear something drop, do not stop looking until you find it!

So, thus concludes the book “Quest for Hammy”.  A story with lots of twists and turns, and ultimately turns a 1989 Fleer set into a 1999 Topps Traded Josh Hamilton rookie autograph, a 2007 Turkey Red Josh Hamilton autograph and an ARod Triple Threads … Oh, and plenty of new trading buddies along the way!

I supposed my next should be Quest for Celly – the replacement phone, using nothing but the profit I get from the collection I just purchased!  That should be a piece of cake though.