Don’cha just love dealing with people onilne?  I have met plenty of fantastic people through Craig’s List, various forums, the blogosphere, etc.  but man alive … there are some real turds out there.

As a person who regularly partakes in the buying, selling and trading of items, I have come to find that most people are morons.

Ok, maybe that is taking it a bit far, but I’d estimate that 30% of all folks who say they will get something either stand you up, or their dog died for the 8th time, etc.  The others tend to be real tough guy keyboard warriors, thinking that their 2 cents of negative opinions actually hold any weight.  I’m not even going to go into detail on this … I just wanted to rant a bit.

Okay, so first, allow me to discuss the 12 million card deal.  I found this dude online, and he said he had purchased a massive inventory from up north, and it was inventory from THREE baseball card shops.

After speaking with him, he said that he felt it was more like 2 million cards.

No problem.  How am I gonna house 12 million cards anyway?  (For those of you who know me, the answer is “very carefully” LOL)

2 million is still a ton, TON of cards.  He mentioned he had about a dozen Walter Payton rookie cards.  Okaaaaayyyyy … this warrants me taking time off running my biz to check out what this guy has!  He said he would entertain being bought out, which is my specialty.  His warning though, was this – he would like to keep one of the Paytons.

Hopeful that I’m armed with enough Benjamins to do the job, I drive – it takes me about 40 minutes to get there, and meet him.  He is a very nice and pleasant man, perhaps 25 years my elder.

I go into the dark garage to see what he has.  Hmmm, nothing too terribly exciting…scratch that … nothing exciting at all.

Stacks of 1991 Donruss, and pages of commons/semi-stars … many of which are damaged from what I would feel comfortable in calling “yuck”.  Slimy somethingeruther in some of these card pocket pages.  He mentioned to me that the ruined cards were thrown out, and I was thinking wha???? Most of these are ruined!

“Though, some of the cards, if they were ruined a bit, I’d keep ’em.  For instance this Wade Boggs … I don’t care what condition it is in; I ain’t throwin’ it away” <chuckle>  Problem was is the Boggs would have been a penny card … if mint!

He mentioned that this was just the tip of the iceburg and that he had TONS more in his office upstairs.  PHEW!

On the phone, I recalled him saying he had about 20 massive holders of cards holding nearly 100,000 each.  We got upstairs, and the office was filled with cards.  Stacks and stacks and stacks of cards!  He quickly pointed out the tub of rookies and autographs.  YES YES YES

Still semi-hopeful, I asked about the Payton rookie cards.

He went to the other room to retrieve some other cards … I still held out hope that he was bringing something good.

He also let me know that there were a handful of Michael Jordan rookie cards in some pages (I found none) and a Mickey Mantle rookie card somewhere in the cards.  I’m thinking perhaps he was speaking on a Mickey Mouse rookie card, because not a single card I laid my eyes on had any value whatsoever.

As I was about to make my exit, I noticed something….the amount of wall space that I could see.  Shouldn’t 2,000,000 cards look like more?  So I asked him.

“How did you come about your total of 2 mill?”

Him: “Well, you’ve got to remember I packed the sides in with cards too.”

Ahhh, that awkward silence that happens when your math doesn’t add up.

I was quickly ushered out of the house by a client saying he had an email problem, which figures … one of the few times I leave the office during biz hours … and it happens when I’m 40 minute away.  Looking a a “yuck” 12 million … errr… 2 million … errr… 200,000 card collection with a phantom invisifractor Mickey Mantle rookie card.

Oh well.  The day was not all a loss.  Why?  Because I kept thinking to myself I will only hit a home run if I keep swinging.  Well, that and because I scored this: 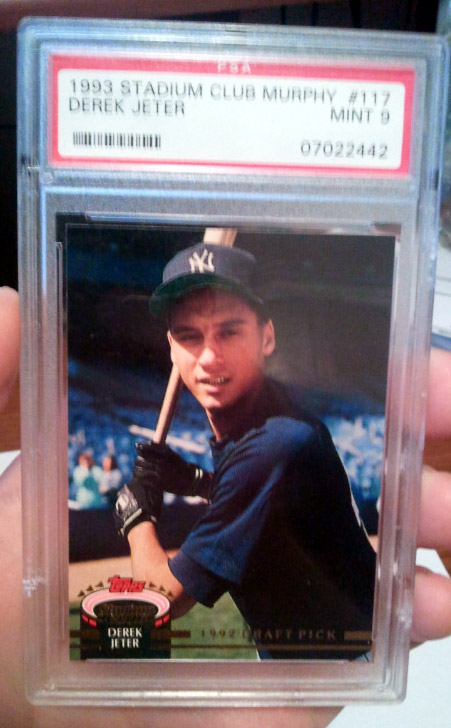 I found it online the night before from someone who said they went online for $100-$150, but he was negotiable because he needed the money.  We started a marathon of emails back & forth, and it ended up that he was going to take $35 for it.  I looked, and sure enough – he wasn’t lying!  The car does in fact sell for $100-$150!

I went to bed dreaming of the card, and realized after a few hours after waking up, that he didn’t get back to me.  That is typically how it goes though.  People will not get back with you for anything…ever….unless it is a scam.

Well, he actually DID end up getting abck with me.  He called saying that he was at the halfway point of where he & I lived with the card, because he anticipated coming up to me to bring the card, because he had to meet someone where he was at to sell some video games. The only way he would be able to drive to me is by getting gas from the cash he got from the games.

The problem:  He ran into a turd who stood him up.  Glad it isn’t just me who finds these guys, but anyway, he was really frustrated because there he was … stuck with his games and the card, and barely enough gas to get home.  I felt bad, and even though I had a rough day with work & the “12 million card” deal, I agreed to drive up there.

I met him and grabbed the card.  I told him about all the experiences that I had with people online – about people usually NOT following through with what they say.

He then told me he dated a LOT of women…from Craig’s List (wow!) and had only been stood up once.

So, at the end of the day, I was able to goto bed with my new Jeter rookie in the fold for a great price, and a frustating, but blog-worthy story.