My Dream Come True … 20 Years in the Making

20 years ago, at 12 years of age, I sat eagerly in the passenger seat while my mom drove me to the Tri Star card show to meet my childhood hero Jose Canseco.

This was before all the steroid controversy (though, after various dui’s, domestic abuse accusations, etc.) – my folks said over and over again that I sure could pick ’em as far as heroes go.

Mom and I got to the line and asked the following question:

“Do you want to have your picture taken with Jose for $50?”

But, money was tight, so we couldn’t have that done.  I didn’t feel disappointed, though.  I was just excited to meet him.

Mom recalls the embarrassment (that I don’t remember at all, I was star struck) of there being no line of people for him (perhaps we were early or late?), and me zig-zagging, left to right to left through the lines setup all the way until I got to him to sign my 8×10.

I got to him – now was my chance to leave an impression that would last forever.

It probably took an hour and a half to get home about 35 miles away, thanks to downtown being an awful place to drive, but I relived those 7 seconds of my life over and over, oblivious to how long it was taking us to get home.

Throughout the years, I followed Canseco.  I recall when he got traded to the Rangers.  I thought life was over, and was sure that my folks would allow me to stay home from school and mourn.  I was wrong, so I threw on my A’s baseball hat, and Canseco shirt, then pouted all the way there.

As you probably know, the Rangers wasn’t his only stop.  He bounced from the Rangers (as the fly ball did on his head over the wall for a home run) to the Red Sox, Blue Jays, Expos, White Sox, Yankees and Devil Rays.

As if he didn’t have enough controversy surrounding him, the pressure cooker was really turned up *after* baseball.  He was in jail, went bankrupt, blew the whistle on baseball about steroids, and many other things.  Yet through it all, I still followed along.

As a young baseball fan just starting out at 9 years old, I had a real life super hero to follow, and I loved listening to the A’s on the radio at night.  It was like when Canseco was up to bat, everything else just ceased to exist.

Fast forward up to a few weeks ago, I was browsing the Tri Star site to see what dates it would be in town, and checked the autograph appearances.

Never in a million years would I have ever thought he would have ever come to Houston again to sign.  But he did!  And sure enough – a photo op was available!!!

I spent the next few weeks planning this thing.  What I came up with was this:

– Get an A’s jersey to wear

– Bring the 1988 All Star game bat signed by Canseco that my wife bought me several years back for him to pose with (and tell him about it).  The only piece of memorabilia I would never part with!

– Determine how to have him personalize it

I searched ebay for a few weeks, and found the right jersey for the right price, as well as what to have him sign:  an original 1989 World Series baseball.  What could be better?

Hmmm…I wonder if he would rub the ball on his sweaty forehead … or perhaps nuzzle it…GAH!!!

What’s wrong with me?!

To my Bash Brother Tanner 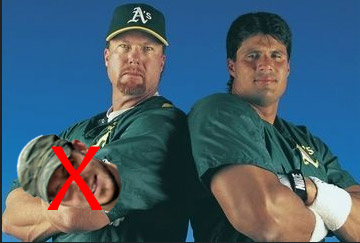 Why do I care so much?

Oh yeah, because this has some weird direct tie to my childhood.

So anyway, the day came, and I was able to hit it up with a few other Canseco fans.  Generally, whenever I hear something about Canseco, it is negative, so I tune it out, but it was genuinely nice to connect with other fans.

So, in typical rock star fashion, Jose comes out – all 6’3 240 lbs of him … with cowboy boots, shades on, and a silver necklace that looked more like a choker on him.

I was able ask him if he wouldn’t mind posing hold the bat my wife got me for Christmas, and he agreed.  In the picture, I was holding the ’89 World Series baseball.  The most significant World Series in my life.

I shook his hand aftewards, and anxiously awaited the picture to be finished processing.

I got the picture back, and admit I was not happy with it. I was really down about it, but that all changed when I noticed a few people taking pictures with him at the signing table!  I use photoshop quite a bit, so I was able to tweak it a bit to make it a bit better. 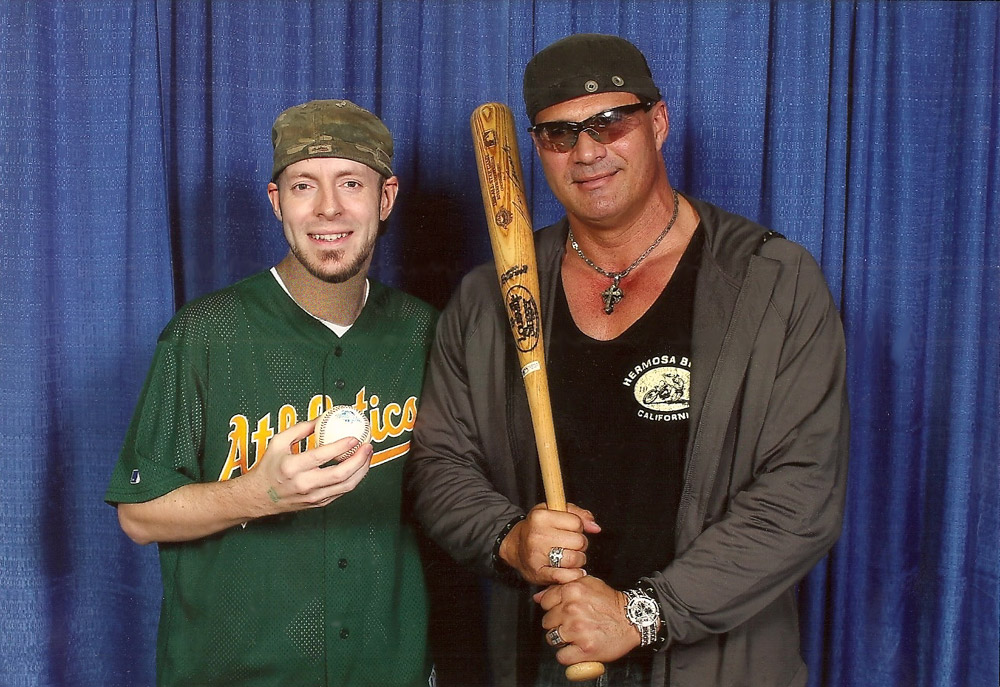 I struck up a conversation with a guy in front of me, and he agreed to take a picture of me and Jose.  I threw up some banter toward Jose and he acknowledged, while chuckling along with me.
Jose told me to hold up the ball, which I did.  Then he said “Here, hold it so you are showing the signature.”

He is speaking to me!  This is a TON better than the “s’alright” I got 20 years ago.

The guy took a picture, but I was horrified … my redemption story was about to come to a screeching halt…

“Oh wait … I took the pic while you were looking down.”

“Canseco, I’m sorry – do you mind if we try this one more time?”

“Sure, no problem.  Here, let me hold the ball this time.”

“Haha, okay – You are probably better at it anyway.” 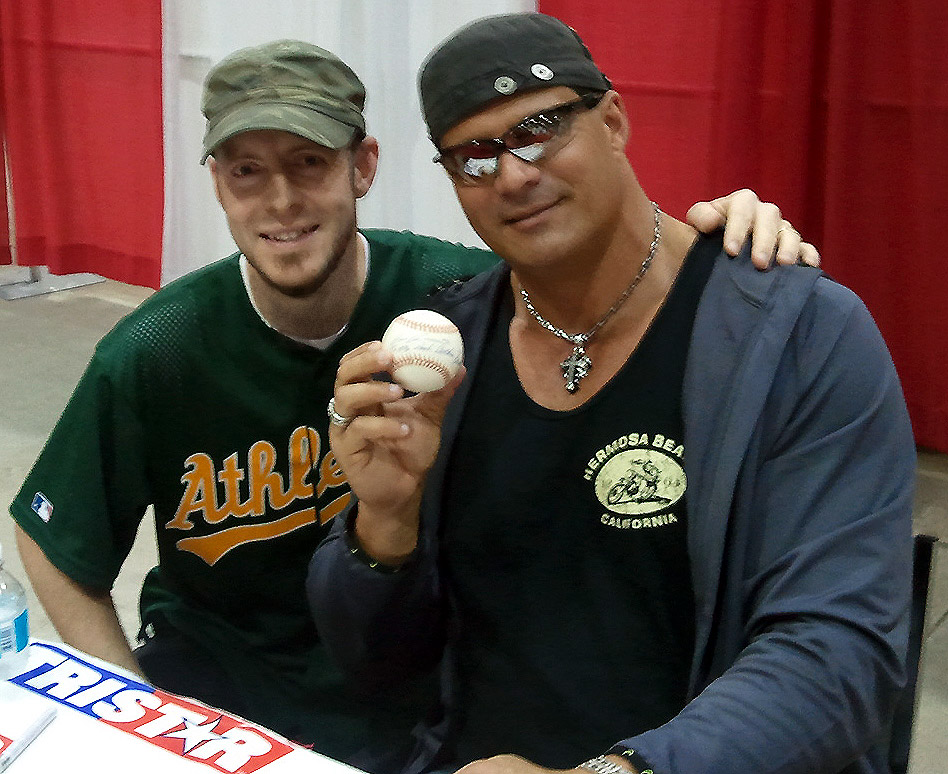 As with everything in my life, it didn’t work out how it was supposed to…rather, how I thought it should, but it ended up being a fantastic experience anyway.  God is good and merciful to me in many ways … even in things like this that don’t matter one lick in the grand scheme of things.

You can’t see it in the picture, but for some reason, he threw up some quotes around my name, so it says:

Jose, is this a jab at me for being pale?  Oh, Jose – you kidder, you.  You always know how to make me laugh!

So now, I have a fantastic memory of my childhood hero, Jose Canseco.  I may not have shown it on the outside, but as you have likely just finished reading my thoughts, that 12 year old version of me was still alive and kicking on the inside.