Are people normally just idiots, or are they all liars?

Over the past several years, both professionally and from a hobby perspective, I have run into many, MANY interesting characters.  Delving into buying and selling sports cards, among other things have really shown me how different people can be.  I think you tend to find out how diverse we really are … especially when it comes to making a deal.

I run into many things that I try to make a buck off of.  If I post a barbie, you get all kinds of moms who want them for their little girls, so they hop in their $50,000 SUV, and buy.
If I post a pair of Air Jordans, you get everyone trying to haggle … and almost no one seems to be able to spell, or use proper English!  Email requests on them are like one run-on slang extravaganza, which takes me a while to decipher.
Example:  “sup u gotz jorans take fitty they fake?”
Ummm … What????
AGHHH why do I get off into these tangents???? That isn’t what I was going to write about at all!  Anyway, let’s get to the meat of the potatoes.
Yes, buyers come in many shapes and sizes.  None so far, have held a candle to who I will call “Ty”.  It is important to remember that Ty is probably about 26 or so.  He is not some punk teen.
I met Ty a while ago.  He bought some boxes and binders of cards off of me.  I met up with him, and he had all of these fantastical stories about how he is going to be drafted by the Tigers for his phenomenal throwing arm.  He is working on a record label, and was in the military.
Look, you can tell me all the BS you want … I enjoy being entertained, and will typically just smile and nod.  But Ty … well….keep reading.
He said thank you for the cards, and a week later, he asked me about some other cards I had up.  He only wanted a specific player.  I told him fine, and quoted him a price.  Ty did not like said price, and accused me of trying to rip him off … wha????  I said ok, fine – well you don’t have to buy, but my prices are really good.
He then proceeded to tell me that he is not interested in paying my prices, and his Uncle who owns a shop said I was ripping him off.  Interested, I asked where his uncle’s shop is, and he said out of state.  He never could give me specifics.
I continued on and said I am sorry he didn’t like my pricing, and that was it.
A few weeks later, he emailed me out of the blue, saying he had a bunch of cards and Nolan Ryan autographs he had to sell because he needed the money badly for something about his parole officer.
I decided to give him another chance, and agreed to meet him, and gave him an offer.  I even brought him a FREE card just to be nice.  As it turns out, there were only half the cards he said there were, and the Nolan Ryan autograph COA’s were “not with him”.  I said I would be interested in them too, but would like for him to go home and get them.
“OK no problem bud … I’ll text you when I get back so we can meet up.”
I never did hear back.  What I did find in the cards I bought from him was, this!!!! 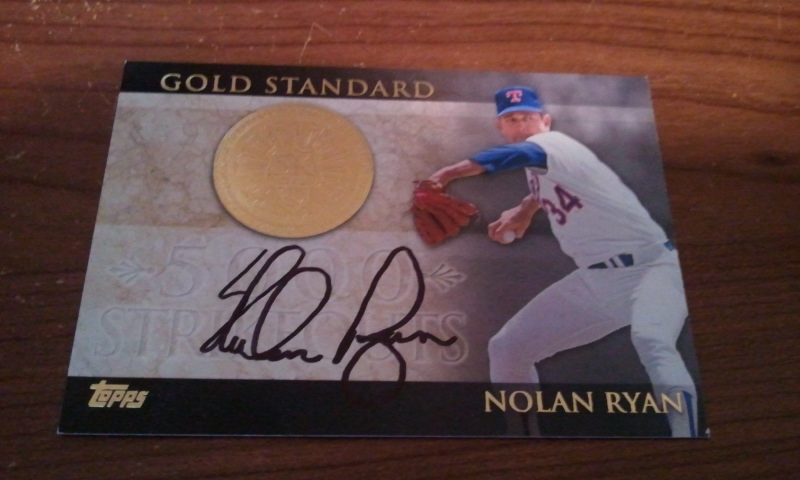 Nice!!!  Surely the cardboard gods were smiling upon me for being nice to this fella.  Flipping it on its back shows this … 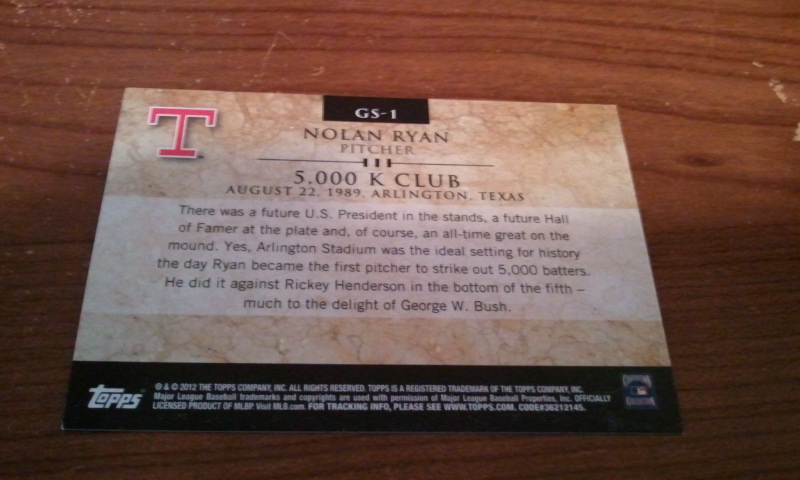 Wait a sec … is something wrong here?  Aren’t these supposed to have a message or something on the back?  Like confetti jumping out saying “Congratulations!  You won the lottery!  You are a rich man, for you are now the owner of a Nolan Ryan autograph!!!”????
Nopers.  Nothing like that at all.  Upon closer inspection, it looks like the penmanship of his signature could have been done by his grandson.
Looking up at the box that held the cards I bought from him, I had to laugh out loud, and mighty heartily, might I add.  The box he gave me, on the inside flap, had several of his signature forgery tests of Mr. Ryan.
It totally figures with this guy!
A few days later, I have the cards I bought from him for sale, and Ty writes me saying he wants to buy back some of the cards I bought from him.  I told him I was sorry, but they were already being worked in as part of a deal.
THEN, he had the audacity to say I’m a cheat … I ripped him off.  That I *stole* these cards from him, and I know it….etc.
I was not happy with this guy, because in the past several dealings, he has called me a lie, a cheat, a rip-off, etc.  So I called him out on it, and how I don’t do business that way.  I was really dumbfounded.  I mean, come on … what adult does this?  Don’t answer that … many do … why?  Because many people are idiots.
So that is where the story ends … wait … no, no it doesn’t.  Keep reading….
We continue to chat, and I finally give in, saying he can buy his cards back from me, but he better knock off the immaturity.  I said it needs to happen the next evening, if he wants this to happen.
He proceeds to tell me that he has a terminal disease, and that “I won’t have to worry about him much longer”.  Wow … I just don’t know about this fella anymore.  I mean, who would joke/lie about something so heavy, you know?
The next night comes, and I do not hear from him to meet up to sell him back his cards.  He tells me that he is sorry, but he was coughing up blood, and had to be sent to the emergency room.  I told him I’m very sorry, and hope he feels better soon.  He told me he was right there in the hospital bed right now.
I decided to give him some more time … until … I got an email from him responding to an ad of mine … one that he didn’t know was me.  He asked if I still had the cards I had posted for sale.
Now folks, it is important to note that I don’t do what I’m about to tell you I did, ever, but this time called for it.  This may be tricky to explain, but I’ll give it a try.
With my phone in my hand texting him as myself, I opened my email up and  used another account under the name of Ashton to answer his request about the cards he had just asked about, saying they are available, but only tonight, and he would have to drive to me in the next hour or so.   He agreed to do so.

As myself, I texted and asked him what hospital he was at, and how long he would be in for.  He told me where, as well as that he would be in the hospital for days, and I said great!  I’m very close to there.  I would be happy to drop the cards off to you and you can just pay me for them later.  “What is your room number?” I asked.  He said “I’ll have my wife see and get back to you.”  <crickets>
As Ashton, I gave him a great deal on the cards.  So great, that apparently he was willing to get out of the hospital bed and meet me within 15 minutes close to where I live.
So here I am, as myself, texting him ..this poor, terminally ill soul, coughing up blood in his hospital bed who will be laid up for days, and there I am on my email, conversing with him who is seemingly an entirely healthy man.

What is one to do?
***
So, we made the meeting to get together in 15 minutes.  Him, not knowing it was me who he was meeting.  I just simply could not wait to see the look on his face when he saw it was me he was trying to lie to.
I scurry over to the grocery store and grab some congratulatory balloons for beating his sickness, and a get well soon card…complete with his Nolan Ryan forgery stuffed inside.
I get there, and wait.  Sure enough, like clockwork, Ty shows up and apparently doesn’t recognize my car at first, because he turns his car off, and is about to get out.  Right when he steps one foot out, he looks at me, standing with balloons, a card, and an evil grin, he shuts the door on his leg *HARD*, tries to make a fast getaway, trying to turn the car’s engine over, but it simply wouldn’t go.
His car died.  ….. 😀
He slams his head on the steering wheel, opens the door, and hobbles out with his newly injured leg, and his hands up in a surrendering fashion.  “Hey man.  I’ve had a rough night. ”
“Yeah, apparently you have!”  I said.  “Here, I got you something.  Here are some balloons for congratulations for making a speedy-quick recovery.  Here is also a card for you.”
As he opened it, his Nolan Ryan fake fell to the ground at his feet.  I didn’t think he could get any whiter than he did when he first saw me.  Boy, was I wrong.
My first thought is that he would just apologize, and/or make excuses.  Instead, he looked up and said “Do you have the cards?”  I laughed, and walked off.  He called out louder “Can I at least have a ride back to my house?  My car is completely dead!”
Man, this guy is unbelievable!
I stopped, turned around and walked back to him.  While he was gripping my balloons, and card, I said “No, Ty.  No you can not.  Now give me my balloons, and my card back.”
I got in the car, and a pack of velociraptors jumped in, and devoured the little liar.  Amidst his screams for help, I sped away.  The deliciousness of the experience shall live on forever.
***
Ok, so maybe everything in between the starred section didn’t happen.  That was just how it kept playing out in my mind.  Instead, I just decided to stop talking with him.  But c’mon … who wants to read my blog about how I was polite, and did the right thing???