Well friends – it has been about 2 weeks since I acquired the massive lot of unopened stuff, and I am down to 249 boxes.  While I have plenty left, 66 boxes have flown the coup!  I have had fun opening some, and trying out different ways to sell.

I sold a few pack lots to some folks online, who promptly requested upgrades to 25 pack lots, got them, loved them, and are asking for more when money comes in.  Would you like to try a pack lot?

I sold some online, and locally, too.  One of the online guys is this feller, the one they call The Dimwit – I promise, he calls himself that.  I would never call someone as nice as he something like that on my own!  He bought some boxes for a group break he is going to do online.  I love watching those things, and this is the second year in a row he has done it.  Good luck to you, Sam – and all your fellow following Dimwittians!  I look forward to it.

Still, my garage is majorly packed with cardboard.  And I’m okay with that!  HOWEVER, that is not what is taking up most of my space these days.

Funny, how that all works out!  Each time I get a collection, it is *right* on the heels of the previous collection.  There is some sort of overlap.  Yes, I actually began talks with the previous owner of these comic books right about the same day I sold the last collection.  I told him I was ready to buy, and he said he was holding them for someone who put a deposit on them, and took a third of them with him.

Throughout the next few weeks, I checked in, and he still said he was waiting, but the deadline was set for December 3rd.  If the guy didn’t come up with the cashola, then he was going to allow me to come over.  I was excited, though, at this point, I had forgotten what kind of deal it was … I just remembered it was “killer”.

I asked him to remind me, and it turned out to be the same amount of comics I bought last time (about 7,000) for half the price of what I bought the last collection for.

This is one of those *RARE* occassions you will see me not haggle.  I was just hoping that the other dude would bail out.

Friday night, after we took care of the kiddos, my wife and I took out the seats in the mini-van, and I made the half hour trek up to his house.  It was amazing.  He told me I probably had 3-4 trips, but I assured him my minivan is a BEAST, and has handled 7,000 comic book collections with ease before.

So, I loaded up the minivan to the brim, but there was a problem.  There were so, so, so many more to go!  I asked if I could unload them at home and come back.  He agreed, and I must say, it was the most miserable time unloading when I was done.  On the bright side, the total count was approximately 20,000 comics!!!!  I have never, ever seen that many or had that many comics at one time!  It took two trips, and I was praying all the way home that the clearance between the back tires and wheel wells would still be there.

I was absolutely in shock.  There are many duplicates, and it is so overwhelming, I don’t even know where or how to begin looking at them.  I keep thinking … what if there is 1 Walking Dead #1?  What if there are 5????  The guy before me had this collection for about 3 years, and admitted there are boxes he hadn’t even gone through.

So yeah, the possibilities are endless here, it looks like! 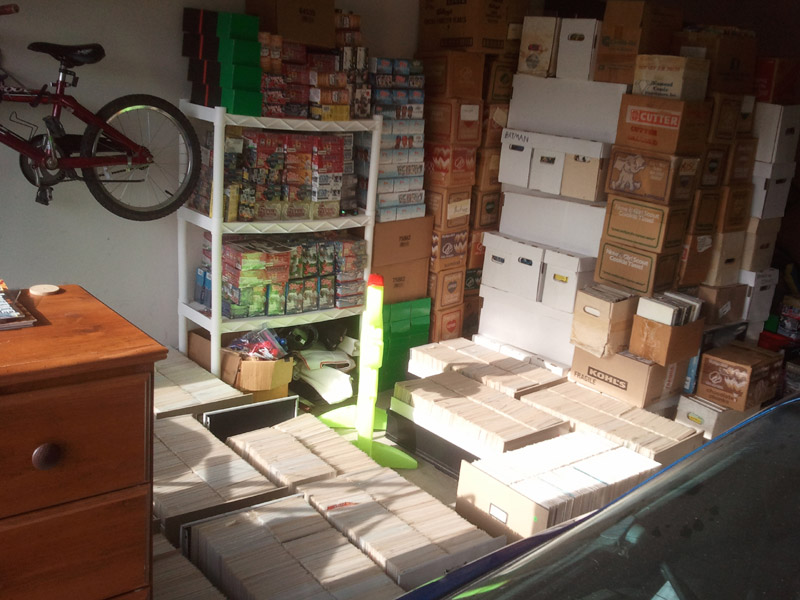 I try to imagine myself at a 10 year old boy … what I would have done, had I been able to look into a crystal ball and saw a glimpse of my garage 22 years in the future.  I probably would have flipped!  I remembered dreaming about the unattainable goal of opening up a full case of 1989 Score or 1989 Donruss.  How funny that I have over 100 cases worth of that stuff in cards and comics in my garage right now.

Oh, before I forget … check the DEALS HERE link on the right side of the site.  I have gone head first into selling online, since I found out how easy it is to print shipping, and leave a message in the mailbox for my mailman to just pick up the packages at my doorstep.  Easy, peasy!