On my way to grabbing dinner for my family, I ran into Target.  Interestingly enough, they had two clearance blasters at $11.99 each – 2011 Allen & Ginter, and 2011 Topps Chrome. 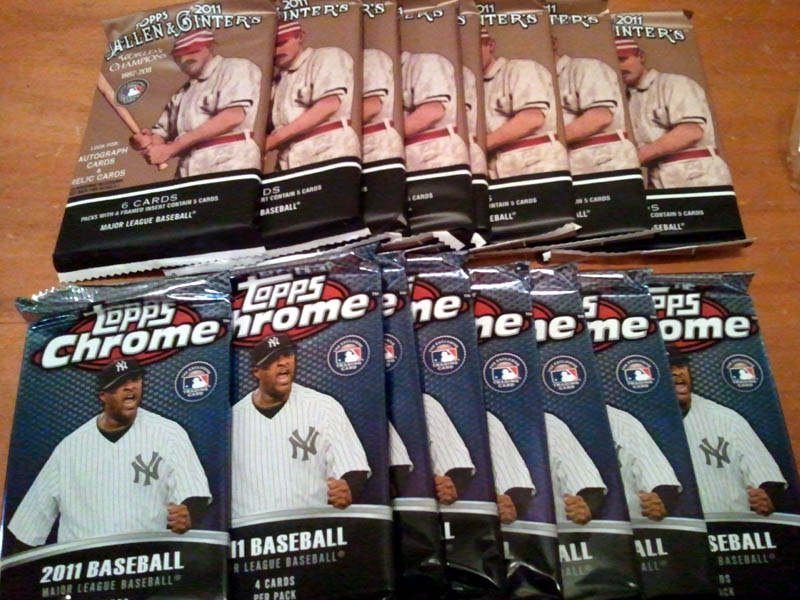 I got some cool stuff, but nothing that reall made me go WOOOW!  Dipping my toe in the pool really made me think a lot … a lot about if I want to put the entire amount into blasters.

And I think the answer is no.

Because you see, the two blasters that looked so shiny and mouth watering on my table, ended up being a pile of cards, where nothing really stood out.  Sure, I got some cool SP’s, serial numbered cards, refractors, x-fractors, rookies, etc.  But nothing that made me go HOLY COW!  If there is one thing I want, it is to make money on my purchases … and then perhaps be wowed.  Neither happened.  So, as I see it right now, I look at a pile of cards … in a box.  And I think to myself “is this $26 worth of cards?”  Definitely – but not to me.

Even if I had bought ONLY $11.99 blasters with ALL the gift card money, that would mean I’d have 42 boxes to go.  It sounds like heaven … it really does!  But, after the wrappers settle to the ground, I simply may not have the kind of enjoyment that I would when having bought them.  It is, after all, only 2,000 cards, if each pack has 6 cards.

I know how I am – having that kind of money wrapped up in cards that would net me a few hundred dollars loss … just leads to heartache.  So, it was a blessing in disguise to be able to only get a few blasters for now.

So, I’m going to bite the bullet, do the smart thing, and get the cashola.

With that said –  Let the “what can I generate out of the $550 worth of Target gift cards?” game begin!