I feel like I’m a high roller with all the money I’ve been putting out recently for cards!  Actually, I’ve been putting up record breakingly low prices for things.  I’m not sure how I keep running into these deals.  Many of them aren’t super-awesome-fantastic.  They are just THERE, and they are not a risk, because I know at a minimum, I can make a small bit off of them.  Particularly, these $10-20 deals I run into that I feel confident I can have fun with, then pull $20 profit out of or so. 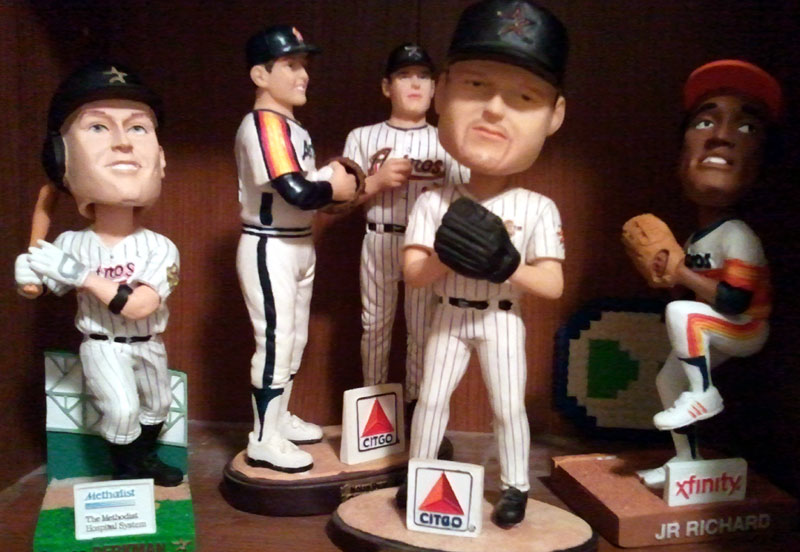 Friday night, I met up with a dude who wanted to basically just get rid of his collection.  It was good and ungood.  I got home and found several cards in horrible condition, but there were some Griffey rookies, some vintage commons, etc.  I figured I’d be able to make some off of it, after having fun going through them.  There were even a few autographs, so that was nice.

Tonight, I met with the same guy whom I got the cards on Thursday as well as the jersey.  Such a nice guy!  He kept throwing things at me – Ultimately, I got an 8×10 autograph of a football HOFer, a Darvish chrome rookie, Eddie Mathews game used bat card, Astros hat, Orioles blanket, McDonalds bucket of Scooby Doo for my son, and some other stuff … all for the price of about what I could get for the 8×10 auto.

That wasn’t the awesome thing though.  While garage saling with my wife this morning, we found a girl who was a nutso Astros fan.  I walked up the driveway, and saw only her husband.  There were some binders of cards with decent stuff, though it was overpriced.  I did see a bunch of bobbleheads.  I made an offer for all of them to clear them out, and they gave me a great deal.  After talking with the wife for a while, she said she had a bucket of autographed baseballs.

They were not gradable quality, and they were mainly of lower players, but I was able to pick them up for a *very* good price.  There were about 15 autographed balls altogether.  I also picked up a few cool Jeter items.

It was great, because I hardly ever find any cool baseball/sports stuff at garage sales.  While I can’t say I hit the jackpot, I would say today was a total winner.