Steroids and the Hall

With all this talk about the Hall of Fame, it got me to scanning some blogs, and thinking a bit about the steroid era, and the players who were my heroes that were in it when I was growing up.  I’ve said before, Canseco was my favorite player.  In the late 80’s – early 90’s, it looked like he was going to put up Hank Aaron numbers, but instead churned out something that looked more like Dave Kingman.  A great player, mind you, but nothing near Hank Aaron.

Then you have McGwire, a guy who was in Canseco’s shadow for a while, and had a few off years.  Then, he moves to St. Louis, and puts up some absolutely ridiculous numbers.  McGwire was a different guy though, because everyone loved him.  He was the face of St. Louis for a long time.  Then, he disappeared from the public eye for about 5 years.  I’m glad to see him back as hitting coach for the cards.

Finally, you have Bonds – a guy that many folks didn’t particularly like off the field.  A man who was already a hall of fame calibre player in the 80’s and 90’s … a fast 30/30 type player … probably all of 170 lbs.  Then, bulked up to the 220+ range, with all kinds of muscles in his late 30’s / early 40’s.  Sure, people started talking.  The way I see Bonds, is some evil mastermind that got some sort of super-human boost to make him the most powerful cheater on the planet.  Think hobgoblin in Spiderman.

﻿
The numbers don’t lie!  73 home runs in 2001, 4 straight MVP’s…heck, the man walked 232 times in 2004 as a 40 year old … in 617 plate appearances.  Yes, he averaged being walked more than once in three plate appearances.  In ’01, he his a homerun every 6.5 at bats.  This is the only player that I recall seeing being intentionally walked, with the bases loaded!  The proof is in the steroid laced pudding:  He had pitchers scared.

Would all of this have happened, had he not juiced?  His numbers would likely have been substantially lower, but still would have probably easily made it to the hall of fame.  But lets not stop there – let me play devils advocate 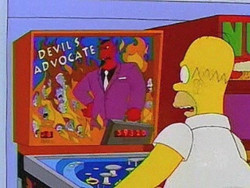 Ok, thank you for that.  Now, I’m back.  Let’s step back and consider a few things:

Baseball has never been a “static” game in terms of playing conditions.
Our nation’s record of equality hasn’t exactly been stellar.  Can you believe that blacks have only been able to play in the majors for a little over 60 years?!?  I think Satchel Paige, a player who’s legend may never be surpassed, didn’t start in the majors until I think he was 47.  It is absolutely sad that we weren’t able to see him play for the previous 27 years.  Wow, what an amazing thing that would have been.

All ball parks are different shapes and sizes.  An absolute bomb of a home run in one stadium may be a fly-out that doesn’t even reach the warning track in another.

Pitchers probably were roiding up too.  This is one of my favorites here – if pitchers were on steroids too, then doesn’t it kind of end the debate of unfair advantage as a wash?  I’m not saying everything was fair (it never is) I’m just saying that it isn’t like the roided hitters were hitting against non-roided pitchers.  (See:  Roger Clemens … another player who had a resurgance in his 40’s.)

So, where does that leave you with your unofficial vote of the HOF?  I am not sure where I stand, but most likely, I tend to think that perhaps if the players change, and the home runs are flowing a lot more….taking into consideration that pitchers were doing it too … that maybe we need to adjust the criteria for getting into the hall.  To me, while I may be a lifelong fan of Canseco regardless of his tomfoolery…while I will always like McGwire…while I may think Bonds is a jerk … perhaps 2 of the 3 (the latter 2) should get in anyway.