The 1933 World Wide Gum Babe Ruth is a fascinating issue.  Before we dive in, let’s first visit its better known version, 1933 Goudey.

1933 Goudey is a monumental set in the rich hobby history of baseball cards.  It is considered one of the “big three” sets, alongside the T206 White Borders, and 1952 Topps.  In the eyes of many, the Goudey set was a breath of fresh air for collectors, because baseball card collecting had hit a production quality lull during the prior quarter of a century, likely thanks to World War I, and the Great Depression.  This time period was filled with low quality strip cards, and black and white photo cards.

As the first American company to issue baseball cards with each stick of gum, Goudey was reminiscent of the golden age of baseball card collecting (when T206 tobacco cards were created).  Full color lithography with beautiful artwork, distribution with gum, and a loaded checklist all make this issue legendary.

The featured player of the Goudey set is none other than baseball’s most popular figure, ever: Babe Ruth.  He was featured not once, but four times in the set. 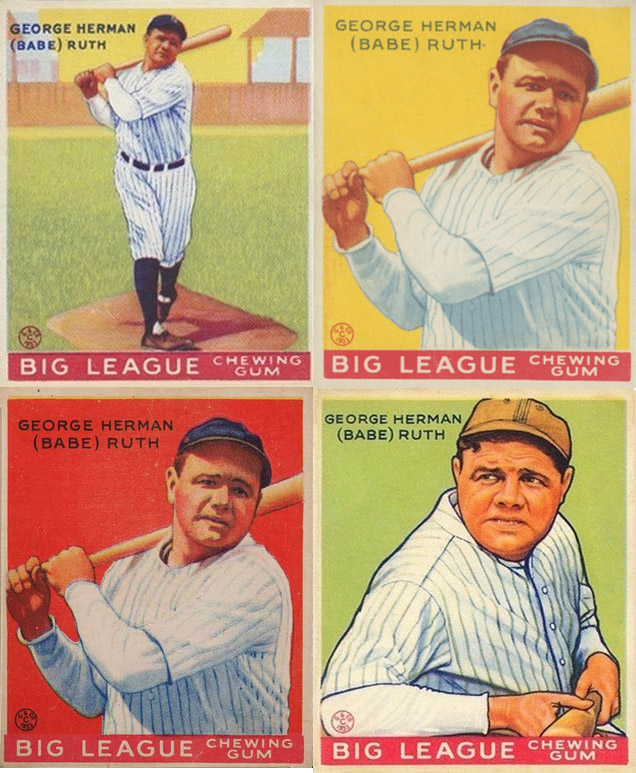 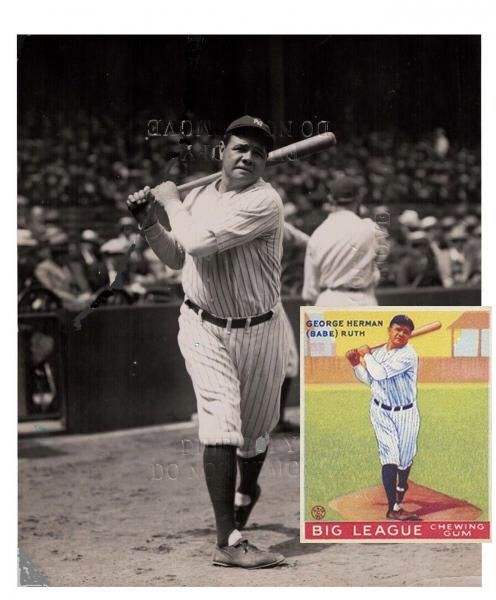 As shown in the uncut sheet below, the full body Ruth was double printed.  1930’s children would have been delighted to find an extra chance to pull a card of the Sultan of the Swat instead of Jake Flowers.  (No disrespect to Mr. Flowers meant!) A hidden gem unknown to much of the modern collecting world is an issue that is known to many as the Canadian Goudey, Goudey Canadian Back, or Goudey French Back.  Printed in Canada, World Wide Gum was owned by Goudey, and produced a very similar set to the 1933 Goudey American issue.  The fronts are virtually identical, down to the Goudey Gum Company copyright on the front.  The Canadian set has fewer cards, and the backs show various differences, leading with French and English text, though some only have English. 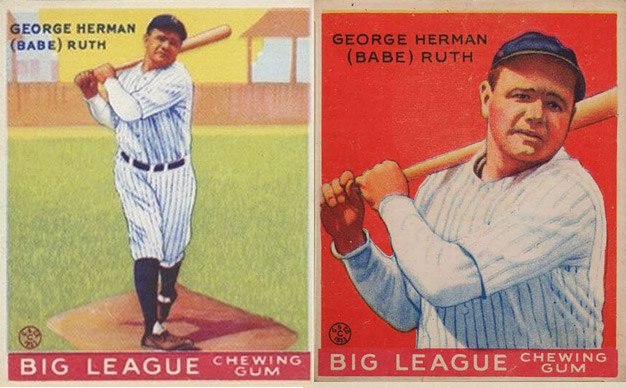 Both of these are exceedingly rare when compared to their American counterparts.  For example, the 1933 Goudey full body Ruth has over 1,400 copies that have been graded by PSA, while the World Wide Gum version has less than 100.  Here is a graph to give a visual comparison: 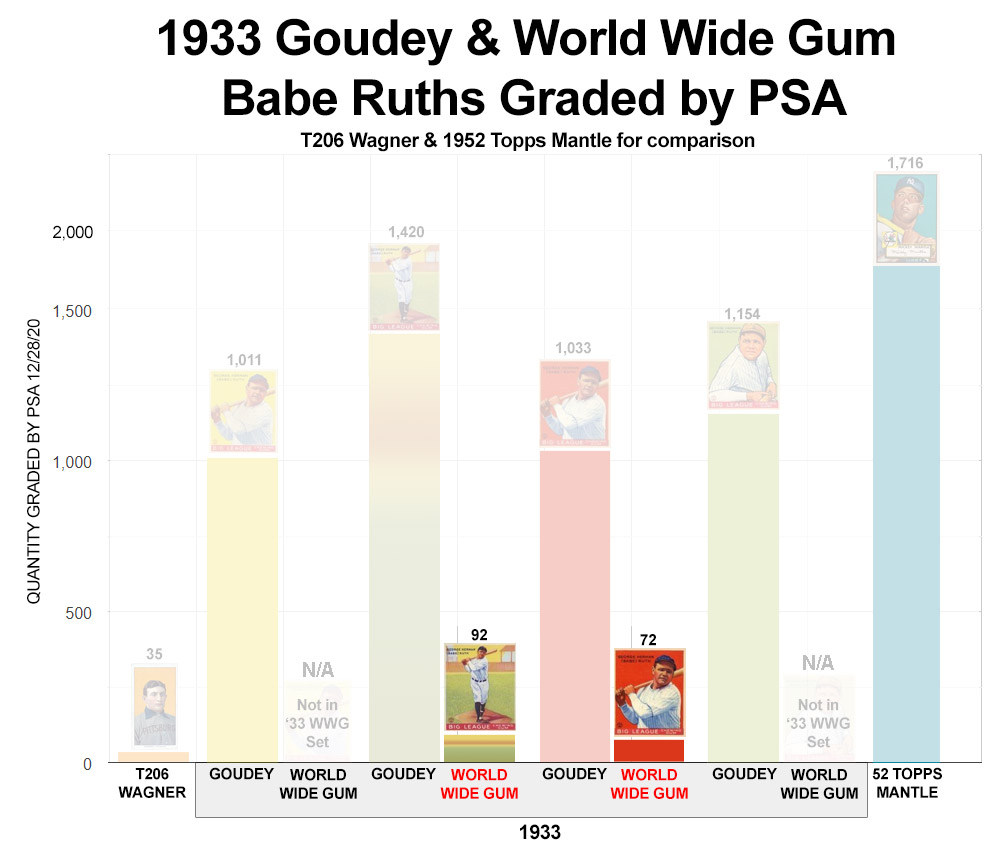 Looking at the PSA POP reports for the *entire sets* show Goudey as having over 90,000 different cards graded, while World Wide Gum has just over 2,000.

It would be far reaching to say Goudey Babe Ruths are plentiful (we’ll save that moniker for 1988 Donruss), so perhaps a better word is obtainable – if you have the funds available, that is.  They have enjoyed a significant rise in value recently, as have the World Wide Gum issues.  Both Goudey & World Wide Gum PSA 1 full body Ruths sell in the $2,000-$4,500 range depending upon eye appeal at the time of this writing – and show no signs of stopping.  Ungraded copies that are ripped in half even sell for several hundred dollars.  While anyone would be proud to own any one of the 1933 Babe Ruth issues, an argument can be made in particular for the World Wide Gum issues being drastically underrated, given their iconic presentation that is virtually identical to Goudey, and drastic scarcity relative to their Goudey counterparts.

1933 World Wide Gum – A Victim of its Own Scarcity

If you think of a Babe Ruth baseball card, which one comes to mind?  For many, it is the 1933 Goudey full body Ruth.  It is seen by many as the most iconic card of the most iconic baseball player in history.  The artwork alone is enough to make this case, but given that it was double printed likely helped propagate its popularity.

So why isn’t the World Wide Gum full body Ruth worth multiples of its Goudey counterpart?  The presentation is virtually identical, after all.  This is likely a case of the WWG being a victim of its own scarcity.  As previously mentioned, the very name Goudey holds extreme weight in the hobby as one of the “big three” sets of all time, whereas the name World Wide Gum is virtually unknown to the masses.  15 years of sales history data shows the search term “1933 Goudey Ruth” returns 13,250 results.  The term “1933 World Wide Gum Ruth” returns about 200 results. 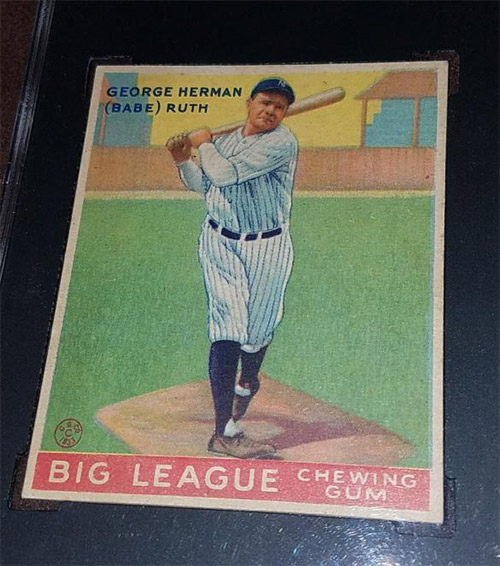 Many hobbyists think that a rarer card is more valuable than a card with more copies, oftentimes forgetting how demand plays into value.  For example, there are many cards with fewer known copies to exist than the T206 Honus Wagner, yet it remains the king of cardboard.

Speaking of T206, there are more similarities here to be explored as well.  The T206 cards are offered with 16 different backs, but since all different backs fall under the mighty name of the T206 umbrella, the rarer the back, the more valuable the card.  A prominent Hall of Famer with a Old Mill back can be worth multiples upon multiples of the same card with a Sweet Caporal back. 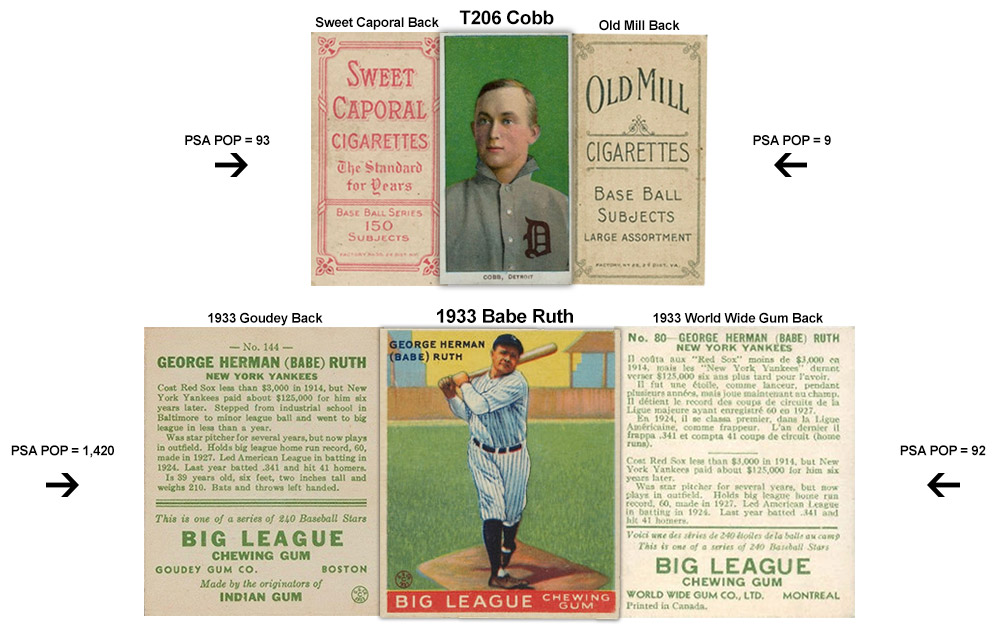 Given that the World Wide Gum issue’s presentation is virtually identical to Goudey, with the main differences being wording/placement on the backs, it is not hard to see how this can be a drastically undervalued issue.

Though the value has not paralleled the T206s with rarer backs (yet, at least!), owners of 1933 World Wide Gum Babe Ruths can be glad to have the rarest versions of the most iconic cards of the most famous player in the history of baseball.