It has been quite a while since I’ve had a meaningful Jose Canseco mailday.  This one, my friends, is a doozy!  It consisted of 11 cards total, but I will only show three here, so I don’t drone on.  I would like to spend some time on each to talk about their meaningfulness to me.

If you read my book, you may recall the story of a guy who I wanted to buy about 50 or so cards from, but after several months of negotiations, it fell through.  I sold the bulk of my collection, and reached back out to the guy after I realized I didn’t want to completely give up everything.  I targeted about 10 cards I wanted the most – one of which included a 2005 SP Legendary Cuts Legendary Duels dual autograph with Will Clark numbered to 15.  We were able to make a deal, and I was extremely happy!

Then this card showed up.  And I lost.

This version is the dual patch #/10 – it has only showed up one other time as far as I can see in the sales history, but this one ended up selling for nearly $700!  Much more than I thought it would have, but it is one of those cards you have a hard time getting out of your head once you see it.  This is a headlining 1989 World Series card that takes me back to 1989 as a kid in California who looked forward to seeing the newspaper, and the promos it included about the upcoming “Battle of the Bay” World Series.  Jose Canseco would be on one side and Will Clark on the other.  This card is perfect, and how a patch card is done the right way – by pairing two players from different teams that have a meaningful connection.  Bright patches of each is just icing on the cake! 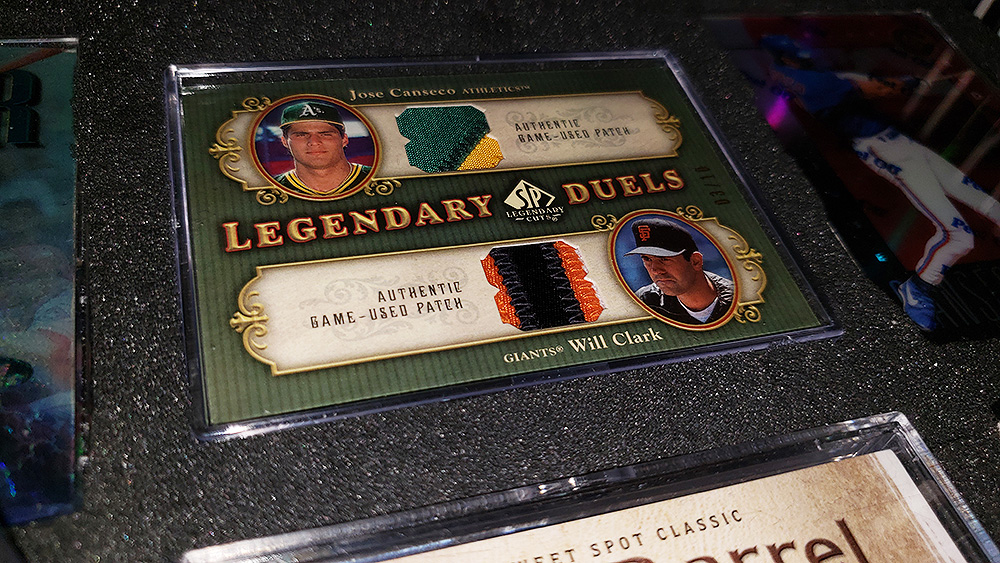 I want you to think of a world where your favorite player has very few baseball cards made of him.  When it came to sole licensed cards, that was Jose Canseco from 2006 to 2013.  I think he had less than 10 sole licensed cards during that 8 year stretch.  Frustrated, you reach for a pack of Sweet Spot and BAM!  You pull a BAT BARREL card of your favorite player – the first one ever.  Talk about knock you off your feet!  The next bat barrel card wouldn’t come for several more years. 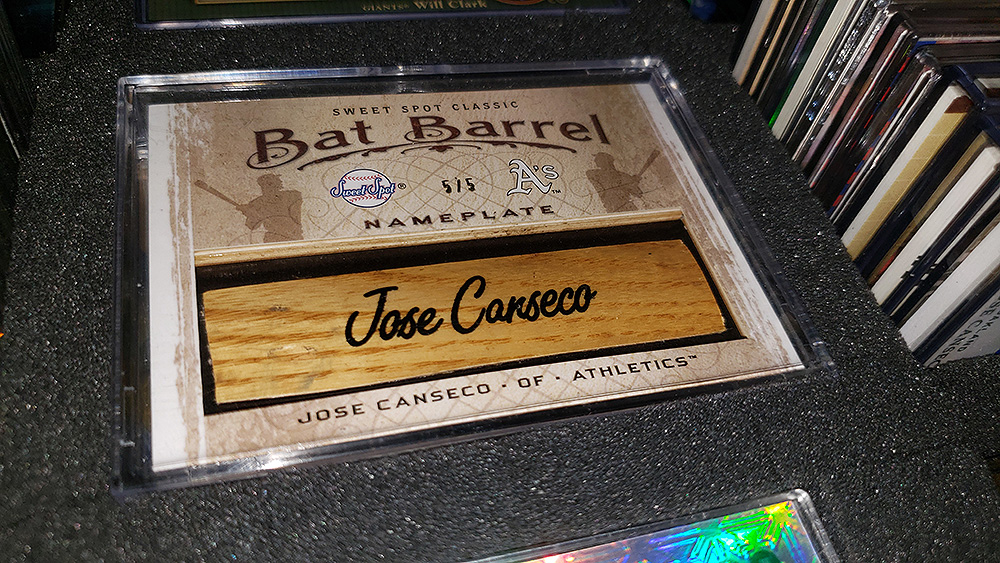 Ladies and gentlemen, this is the big daddy.  A holy grail card.  If your guy is in this set, it is quite possible that you want your player’s red Crusade card over perhaps any other 1/1 out there.

I sold my copy of this, but eventually came to face the fact that I wanted one again.  MUCH more easier said than done!  Over the past few years, 3 of these have popped up for between $400 and $750.  A couple had refractor lines or damage, and one was in a gross looking holder that sold in the wee hours of the morning.  This one is about as perfect as you can  get! 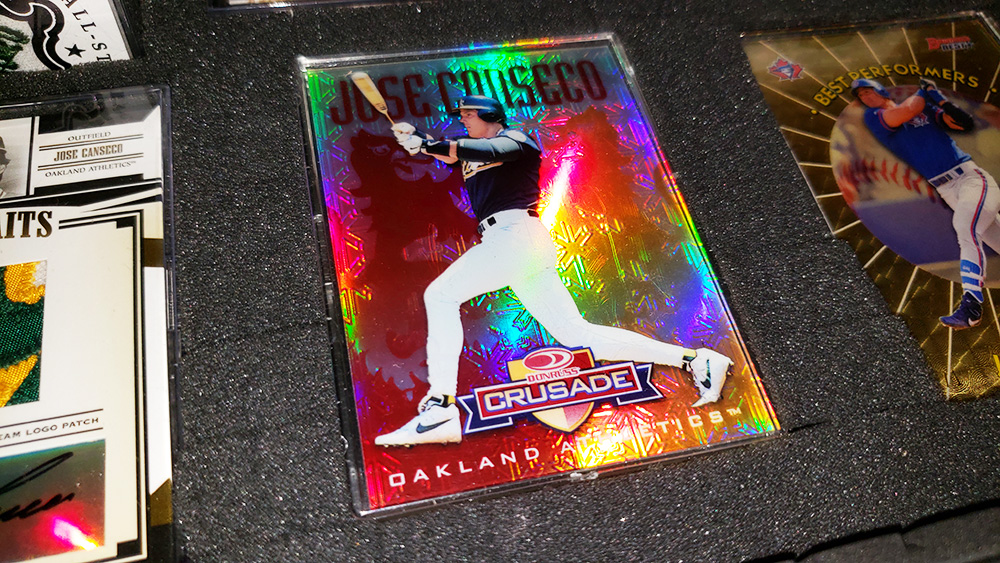 Landing this card is much more significant than the first time, because is it does something for me that I’ve never done before:  It completes the trifecta of my most wanted cards.

Back around in 2014, I determined that the best 3 cards (at the very least from this time period) were the 1996 Select Certified Mirror Gold, 1997 Pinnacle Totally Certified Platinum and the 1998 Donruss Crusade Red.  These cards kept me up at night.  They never seemed to pop up, and I never had them all at once.  First, I had the Red Crusade … then I picked up the 97 Totally Certified.  I sold out of everything, and got back the Totally Certified.  After selling out, the Mirror Gold popped up.  Finally, today I got the Red Crusade, so now I have all three for the first time, ever!  This is a pretty big goal/dream that started about 6 years ago, and I place these above most all other 1/1 cards, or any other cards from the time period. 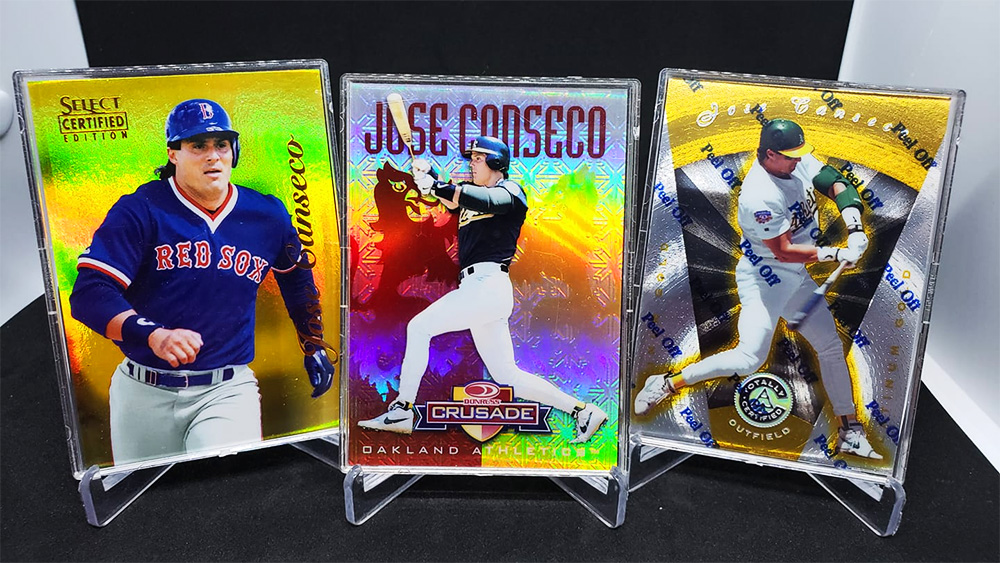 That does it for this mailday, though there were other amazing cards.  The only way it would be better is if the Red Crusade were an executive prototype!