Last year, my wife heavily hinted that the waxed stache needed to go, so I’ve decided grow another wax stash instead … wax boxes that were released during my childhood.   I’ll be periodically posting my newest pickups with memories, perhaps some customs based upon that specific year, video reviews, etc.  It should be good fun and I hope you enjoy going down memory lane with me!

Why am I doing this?
When I began collecting again as an adult, I (like many here) wanted to rekindle that childhood spark of collecting.  I did this by attempting to assemble a run of sets from 1980 to 1992/3 or so.  Somewhere along the way, I lost my excitement for doing this, and I sold everything.  I think I finally figured it out, though.  Buying sets was never too terribly exciting.  I loved them, but there was no mystery.  It was like, you bought the set and then you were done.  No reason for packs, no mystery, etc.  Wax on the other hand, gave you mystery, the thrill of the hunt and a reason to connect with friends for trading.  We didn’t have much to chase compared to nowadays, but it was just pure unadulterated fun.

Like much of life, collecting isn’t about the destination; it is about the journey.   Having wax boxes take me back to a time when I was most excited about collecting as a child.  Opening packs to see what was inside.  Did you catch that?  The excitement was not the cards themselves – it was opening the packs to see what cards were there.  This is ALL about the artwork, memories, tales and nostalgia of what has been wrapped around the cards from our youth. 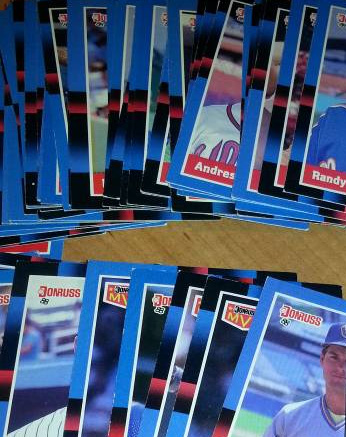 Is not NEARLY as cool as this:

The bright colors, the memories of the artwork at the card shop, the player endorsement.  Just, wow.  The set itself is virtually worthless, but the wrappers and boxes we threw out as kids, though plentiful, are what make the memories exciting for me.

Why From a Sealed Case?
The term “From a Sealed Case”, or FASC, is well known among wax collectors.  It can assure you of a number of things.  In particular …
1) You are assured that they have been untouched.  Some of these boxes will be within 25-40 years old.  That is a LONG time for a box to sit by its lonesome.  One box could have lived for years on a dealer’s shelf with its lip tucked in behind the packs for all kinds of kids to have rummaged through the packs.  It could have survived dozens of times relocating here and there, ultimately winding up in storage with junk packed on top of it before Darrell Sheets buys the storage unit it is in, then tosses it to his kid declaring “that’s a 30 dollar bill right there.”

2) Wax is notorious for having been tampered with.  Wax packs are super easy to open and re-seal – it is very difficult for novices to detect if they have been tampered with.  In fact, many boxes were packed out in sequence, so those “in the know” could open one pack, learn the order of things and dig down to the 4th pack on the 3rd row and pull the star of the set, then just refill that box with 2 other random packs.

Shoot, even the Cello packs were easy to mess with.  Check out my “custom” 1986 Topps Cello pack with Canseco on the front.  It looks great, however, you couldn’t find Canseco in cello packs as he was only in the traded set.

4)  This is the best way to pull a PSA 10.  I personally don’t send cards out to be graded, but I DO like the idea of having a good chance of having PSA 10 cards in the boxes.

To contradict myself, I will likely be getting open boxes and packs from time to time, because this quest is about the nostalgia I have wrapped up into the boxes/packs and not just the cards themselves.

Why Write About This Stuff?
For me, writing about what I get/create and the stories behind them, has become just as big a part of the hobby as actually collecting, and the same goes with the feedback & communication comes from you.  This is going to be my outlet to pour out my passion for the wax of my youth.

What about Canseco?
I’ll still be collecting him, as passionately as ever.  I am super excited to passionately write about something other than him if for no other reason than for you to not have to hear me drone on and on about my cardboard-man crush.  Be warned though, he will make a cameo here and there just like he already has above!  🙂

So, with all that said, stay tuned!  I’ll update this thread as I can.  I would love to hear your stories on each as we go.  For instance, if I’m writing about 1988 Score, and it reminds you of going to the ER because your brother threw a pack of Score that hit you in the eye, awesome.  Or if your dog peed on your 1985 Topps Orel Hershiser?  Let’s hear it!

I do hope you will come along and enjoy the ride.