Two Customs and a Funeral

This past week has been kind of a whirlwind for us here.  My wife’s grandmother passed away, and her funeral was out of town last weekend.  We didn’t know her very well – the last time we saw her was at our wedding, which was over 16 years ago.  She was 95 years old, and according to many, she was a sweet, caring and giving woman.

We aren’t fancy folk here.  We have manual doors on our minivan, and we print our directions out from google.  When it was time to drive out of town for the funeral, we had our printed directions with us and my phone for GPS purposes (just in case.)  We were making very good time … so good of time in fact, that we were on track to be the first people there by about 20 minutes.

As we took a left on 777, we searched far and wide for a gas station that we were supposed to take a right near to get to the funeral home.  This gas station never came.  We went the other way on 777.  No dice.  Slightly concerned (though not yet panicking, because we were only 5 minutes away at this point) we pulled over to get the GPS to bring us to our destination.

Go back 20 miles and take a right.

Seriously?!?! We can NOT be late to a funeral!  We are getting frantic here, because the time is now getting VERY close us being late … and we have no idea where it is.  My wife gets a “where are you?” phone call from her family members.  As it turns out, there are not one, not two, but FOUR 777 roads in this small town…and neither my printed directions nor my GPS understood that apparently.

It is obvious we will not be making it on time, and my wife is in tears because of the stress and anxiety of being late to a funeral.  I did what any good husband would do at this point, and sped up faster than the speed limit allowed.

Immediately I pull over, because I know I’m toast and she asks for my license.  For those of you who don’t know about my license, well …  my picture isn’t exactly “sane” looking.

Yes, this was intentional.  (story here.)  Yes, I’m glad I did it, and yes I was afraid I was going to get hauled off to jail after the cop saw this, because I look deranged in the pic!

When I gave over the license to the police officer, she studied it for a long time.  Long enough for there to be awkward silence so I could tell her that we were late to a funeral.  “Wait here.”

5 minutes later, she came back and let me off with a warning.  (YES!)  I halfway thought this would happen, since it was on the way to a funeral.  While it didn’t help us get there on time at all, it did give us something to be thankful for.  We felt HORRIBLE, because they ended up waiting to start for us to come!  15 minutes later, we dashed inside, in hopes of ducking into the back row.  No such luck – they instead led us to the front row for all to see.  (Figures!)

All in all, the funeral was VERY well done.  We learned a lot we didn’t know about my wife’s dad’s side of the family.  We had prayed the day before that there would be a Gospel presentation, and there was – and it was great!  Everything was laid out about how to have a relationship with Jesus Christ.  I cannot say I particularly like funerals, but out the funerals that I have been to, this was the best.

We came home after what felt like being in the car for 6 hours that day (because, well…we spent 6 hours in the car that day) and collapsed in our Chipotle while watching Shark Tank.

A day or two prior to this, I was busy working on a few customs, which is of course, the main reason I’m writing here.  Two in particular.  The first is one that will be signed in gold by two guys named Moss & Rice.  A black holo-foil dual: 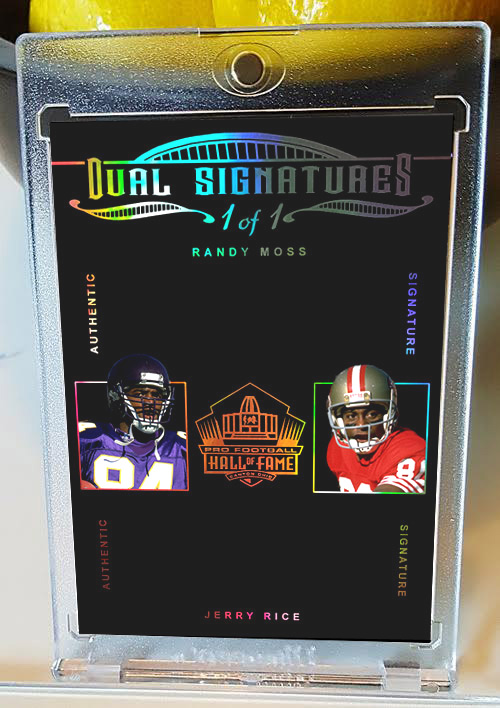 I can’t wait for it to be signed!

The next one already has a signature, and while I LOVE how the one above came out, I’m a baseball guy.  Cut autos are something I also enjoy putting together, so this next one was assisted by a PSA/DNA slabbed autographed index card of #42, Jackie Robinson. 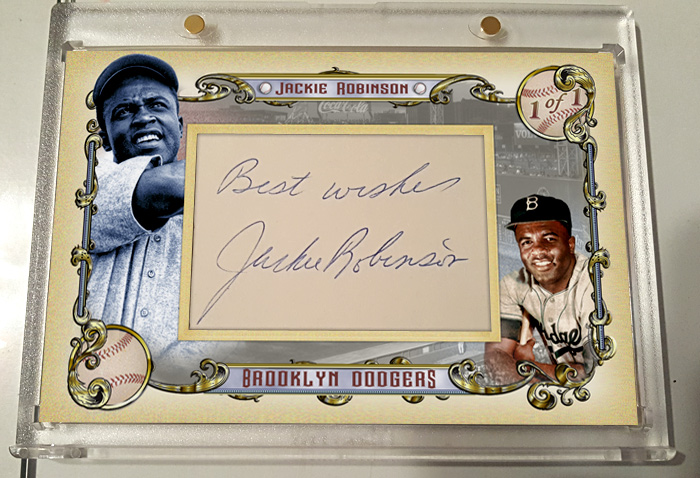 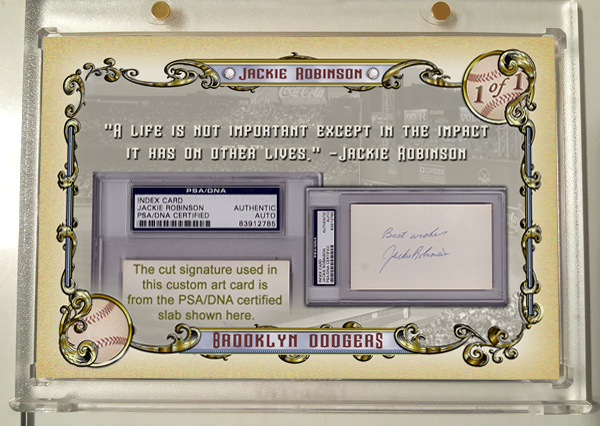 The back shows a picture of the slabbed autograph.  I really love how this one came out, and am thinking of ways to go even further with this design in the future.  Stay tuned!

While I do enjoy the customs, I’ve got to say the last week was much more adventure filled than I had been anticipating.  Here is to a MUCH more tame week coming up.  As always, thank you for reading!